Saint May 24 : Our Lady Help of Christians : #HelpofChristians 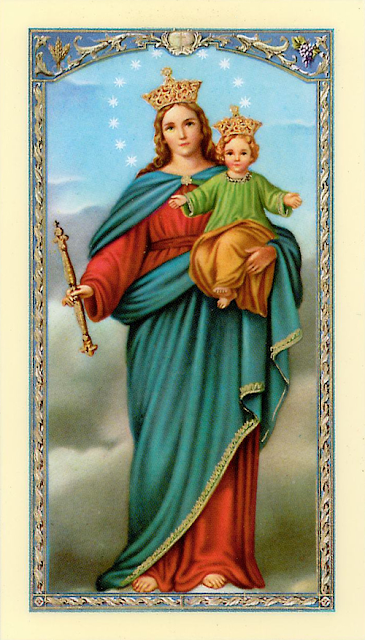 May 24 is the Feast of Mary Help of Christians
The invocation Auxilium Christianorum (Help of Christians) originated in the sixteenth century. In 1576 Bernardino Cirillo, archpriest of Loreto, published at Macerreta two litanies of the Bl. Virgin, which, he contended, were used at Loreto: One a form which is entirely different from our present text, and another form ("Aliae litaniae B.M.V.") identical with the litany of Loreto, approved by Clement VIII in 1601, and now used throughout the entire Church. This second form contains the invocation Auxilium Christianorum. Possibly the warriors, who returning from Lepanto (7 Oct., 1571) visited the sanctuary of Loreto, saluted the Holy Virgin there for the first time with this new title; it is more probable, however, that it is only a variation of the older invocation Advocata Christianorum, found in a litany of 1524.
Torsellini (1597) and the Roman Breviary (24 May, Appendix) say that Pius V inserted the invocation in the litany of Loreto after the battle of Lepanto; but the form of the litany in which it is first found was unknown at Rome at the time of Pius V (see LITANY OF LORETO; Schuetz, "Gesch. des Rosenkranzgebets", Paderborn, 1909, 243 sq.). The feast of Our Lady, Help of Christians, was instituted by Pius VII. By order of Napoleon, Pius VII was arrested, 5 July, 1808, and detained a prisoner for three years at Savona, and then at Fontainebleau.
In January, 1814, after the battle of Leipzig, he was brought back to Savona and set free, 17 March, on the eve of the feast of Our Lady of Mercy, the Patroness of Savona. The journey to Rome was a veritable triumphal march. The pontiff, attributing the victory of the Church after so much agony and distress to the Blessed Virgin, visited many of her sanctuaries on the way and crowned her images (e.g. the "Madonna del Monte" at Cesena, "della Misericordia" at Treja, "della Colonne" and "della Tempestà" at Tolentino). The people crowded the streets to catch a glimpse of the venerable pontiff who had so bravely withstood the threats of Napoleon. He entered Rome, 24 May, 1814, and was enthusiastically welcomed (McCaffrey, "History of the Catholic Church in the Nineteenth Cent.", 1909, I, 52). To commemorate his own sufferings and those of the Church during his exile he extended the feast of the Seven Dolours of Mary (third Sunday in September) to the universal Church, 18 Sept., 1814. When Napoleon left Elba and returned to Paris, Murat was about to march through the Papal States from Naples; Pius VII fled to Savona (22 March, 1815), where he crowned the image of Our Lady of Mercy, 10 May, 1815. After the Congress of Vienna and the battle of Waterloo he returned to Rome, 7 July, 1815. To give thanks to God and Our Lady he (15 Sept., 1815) instituted for the Papal States the feast of Our Lady, Help of Christians, to be celebrated, 24 May, the anniversary of his first return.
The Dioceses of Tuscany adopted it, 12 Feb., 1816; it has spread nearly over the entire Latin Church, but is not contained in the universal calendar. The hymns of the Office were composed by Brandimarte (Chevalier, "Repert. Hymnolog.", II, 495). This feast is the patronal feast of Australasia, a double of the first class with an octave (Ordo Australasiae, 1888), and in accordance with a vow (1891) is celebrated with great splendour in the churches of the Fathers of the Foreign Missions of Paris. It has attained special celebrity since St. Don Bosco, founder of the Salesian Congregation, 9 June, 1868, dedicated to Our Lady, Help of Christians, the mother church of his congregation at Turin. The Salesian Fathers have carried the devotion to their numerous establishments.