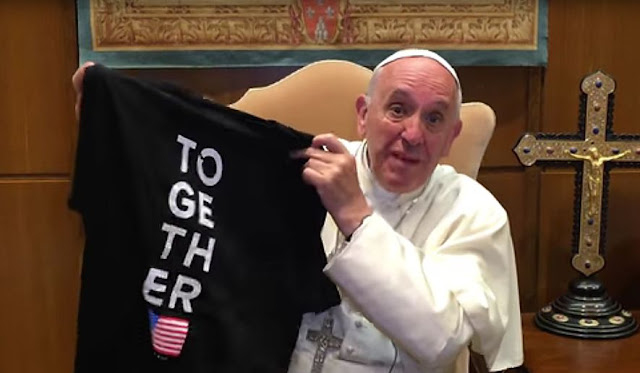 Pope Francis lent his support to an inter-Christian gathering in Washingtonn, DC. It is called "Together 2016" which aims to unify 1 million Christians in prayer on National Mall. Pope Francis said in the  video (bottom),  “Wear this T-shirt in unison, and respond to the great restlessness.” Pope Francis held up a black T-shirt with the logo encouraging youth to journey to Washington, D.C. He continued; “I invite you to a great gathering. Jesus is waiting for you.” Together 2016 was started by Nick Hall,  who hopes to unite people of all kinds. “Jesus welcomes you whether you’re a Democrat or a Republican or an independent. He welcomes you whether you’re young or old. Jesus is an equal-opportunity employer,” said Mr. Hall, an evangelical preacher from Minneapolis. Dozens famous Christian musicians and speakers from various denominations agreed to perform on a stage near the Washington Monument. Here is a list: Matt Maher, Francis Chan, LeCrae, Crowder, Hillsong, Passion, Ravi Zacharias, Christine Caine and Kirk Franklin.  “If we’re singing the same songs together, then we can’t yell at each other,” said Matt Maher, a Catholic musician and eight-time Grammy Award nominee. “Obviously as Christians, we believe in the importance of prayer. Things can change when we take time to pray.” said Mr. Maher. About 300,000 people committed to come for Together 2016, but they had to close a few hours early due to heat related incidents suffered by hundreds at the event.
“There’s buses chartered, planes are chartered. Trains coming from the East Coast have been booked out like an entire couple of cars. People are coming from all over the world,” said Mr. Hall. It Started at 9 a.m. July 16, seven jumbo screens and speaker systems were used. Christians can also participate in ministries 3,583 volunteer spots are available for registration at AwakenMyCity.com. Together 2016 aims at a spirit of service to others that will change the world. . Mr. Hall urged participants to register online at Reset2016.com.
Posted by Jesus Caritas Est at 6:28 PM