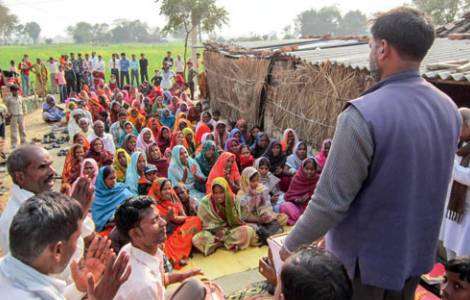 Godavari (Agenzia Fides) - India’s Christians have denounced the brutal murder of an innocent Christian pastor: on 29 July Pastor Yohan Maraiah was mercilessly beaten to death in the east Godavari district, of India’s Andhra Pradesh state. "This was not the first time the Pastor had been targeted : he suffered several attacks and had his church torched more than once. However he remained strong in his unswerving faith in Jesus Christ ", Fides learned from Sajan K George, chairman of the Global Council of Indian Christians (GCIC), who firmly condemned the murder recalling that “religious freedom is guaranteed by India’s constitution". According to the local police, three days ago at least 100 militant Naxalite (Indian form of communism) came to the village, took the Pastor away somewhere in the forest and beat him brutally. Three hours later the body of Maraiah, hands tied behind his back, was found on the outskirts of the village. In a letter left near the Pastor’s body the Maoists accused the Pastor of being "a police informer " and "accumulating disproportionate wealth exploiting Tribals". (PA) (Agenzia Fides 1/8/2016)