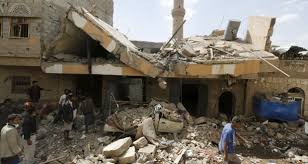 
Local witnesses speak of more than 50 injured. Riyadh’s bombs hit a crowded market. Earlier in the area, Houthi militia rebels had celebrated two years of the conquest of Sana'a. The UN says half of the 22 provinces of the country is at risk famine.