"One of the men who was to judge him in line with the Roman law at the time was a man called Asterius, whose daughter, Julia, was blind.  Valentine gave Julia lessons because she needed someone to read material for her to learn it. Valentine then became friends with Julia through his work with her when she came to visit him in jail.
Emperor Claudius came to like Valentine, too, so he offered to pardon Valentine and set him free if Valentine would renounce his Christian faith and agree to worship the Roman gods. Not only did Valentine refuse to leave his faith, he also encouraged Emperor Claudius to place his trust in Christ. Valentine’s faithful choices cost him his life. Emperor Claudius was so enraged at Valentine’s response that he sentenced Valentine to die. Valentine prayed with and healed Julia, and Asterius himself became Christian as a result.
Valentine used his time in jail to continue to reach out to people with the love that he said Jesus Christ gave him for others.
Before he was killed, Valentine wrote a last note to encourage Julia to stay close to Jesus and to thank her for being his friend. He signed the note: “From your Valentine.” That note inspired people to begin writing their own loving messages to people on Valentine’s Feast Day.
In the year 269 AD, Valentine was sentenced to a three part execution of a beating, stoning, and finally decapitation all because of his stand for Christian marriage. The story goes that the last words he wrote were in a note to Asterius' daughter. He inspired today's romantic missives by signing it, "from your Valentine." Eventually, St. Valentine was also arrested, condemned to death for his faith, beaten with clubs, and finally beheaded on Feb. 14, AD 270. He was buried on the Flaminian Way. Later, Pope Julius I (333-356) built a basilica at the site which preserved St. Valentine's tomb. Archeological digs in the 1500s and 1800s have found evidence of the tomb of St. Valentine. However, in the thirteenth century, his relics were transferred to the Church of Saint Praxedes near the Basilica of St. Mary Major, where they remain today. Also, a small church was built near the Flaminian Gate of Rome which is now known as the Porta del Popolo but was called in the 12th century "the Gate of St. Valentine," as noted by the early British historian William Somerset (also known as William of Malmesbury, d. 1143), who ranks after St. Bede in authority.

The second St. Valentine was the Bishop of Interamna (now Terni, located about 60 miles from Rome). Under the orders of Prefect Placidus, he too was arrested, scourged, and decapitated, again suffering persecution during the time of Emperor Claudius II.
The third St. Valentine suffered martyrdom in Africa with several companions. However, nothing further is known about this saint. In all, these men, each named St. Valentine, showed heroic love for the Lord and His Church.
The popular customs of showing love and affection on St. Valentine's Day is almost a coincidence with the feast day of the saint: During the Medieval Age, a common belief in England and France was that birds began to pair on Feb.14, "half-way through the second month of the year." Chaucer wrote in his "Parliament of Foules" (in Old English): "For this was on Seynt Valentyne's day, When every foul cometh ther to choose his mate." For this reason, the day was dedicated to "lovers" and prompted the sending of letters, gifts, or other signs of affection.
Another literary example of St. Valentine's Day remembrances is found in Dame Elizabeth Brews "Paston Letters" (1477), where she writes to the suitor, John Paston, of her daughter, Margery: "And, cousin mine, upon Monday is St. Valentine's day and every bird chooseth himself a mate, and if it like you to come on Thursday night, and make provision that you may abide till then, I trust to God that ye shall speak to my husband and I shall pray that we may bring the matter to a conclusion." In turn, Margery wrote to John: "Unto my right well beloved Valentine John Paston, Squyer, be this bill delivered. Right reverend and worshipful and my right well beloved Valentine, I recommend me unto you, full heartily desiring to hear of your welfare, which I beseech Almighty God long for to preserve until His pleasure and your heart's desire." While speaking of the amorous flavour of Valentine's Day, no mention is made of the saint. The love of our Lord, depicted beautifully in the image of His most Sacred Heart, is a sacrificial, self-less, and unconditional love. Such is the love that each Christian is called to express in his own life, for God and neighbour. Clearly, St. Valentine-no matter which one-showed such a love, bearing witness to the faith in his dedication as a priest and in the offering of his own life in martyrdom. On this Valentine's day, looking to the example of this great saint, each person should offer again his love to the Lord, for only by doing so can he properly love those who are entrusted to his care and any other neighbour. Each person should again pledge his love to those loved ones, praying for their intentions, promising fidelity to them, and thanking them for their love in return. Never forget Jesus said, "This is my commandment: love one another as I have loved you. There is no greater love than this: to lay down one's life for one's friends" (Jn 15:12-13). St. Valentine fulfilled this command, and may we do the same.

#PopeFrancis "Look at the Blessed Mother from within our own sufferings..." at Mass in Mexico FULL TEXT - Video 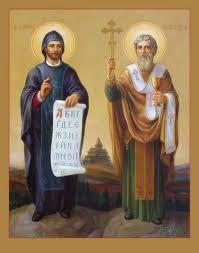 These brothers, the Apostles of the Slavs, were born in Thessalonica, in 827 and 826 respectively. Though belonging to a senatorial family they renounced secular honours and became priests. They were living in a monastery on the Bosphorous, when the Khazars sent to Constantinople for a Christian teacher. Cyril was selected and was accompanied by his brother. They learned the Khazar language and converted many of the people. Soon after the Khazar mission there was a request from the Moravians for a preacher of the Gospel. German missionaries had already laboured among them, but without success. The Moravians wished a teacher who could instruct them and conduct Divine service in the Slavonic tongue. On account of their acquaintance with the language, Cyril and Methodius were chosen for their work. In preparation for it Cyril invented an alphabet and, with the help of Methodius, translated the Gospels and the necessary liturgical books into Slavonic. They went to Moravia in 863, and laboured for four and a half years. Despite their success, they were regarded by the Germans with distrust, first because they had come from Constantinople where schism was rife, and again because they held the Church services in the Slavonic language. On this account the brothers were summoned to Rome by Nicholas I, who died, however, before their arrival. His successor, Adrian II, received them kindly. Convinced of their orthodoxy, he commended their missionary activity, sanctioned the Slavonic Liturgy, and ordained Cyril and Methodius bishops. Cyril, however, was not to return to Moravia. He died in Rome, 4 Feb., 869.
At the request of the Moravian princes, Rastislav and Svatopluk, and the Slav Prince Kocel of Pannonia, Adrian II formed an Archdiocese of Moravia and Pannonia, made it independent of the German Church, and appointed Methodius archbishop. In 870 King Louis and the German bishops summoned Methodius to a synod at Ratisbon. Here he was deposed and condemned to prison. After three years he was liberated at the command of Pope John VIII and reinstated as Archbishop of Moravia. He zealously endeavoured to spread the Faith among the Bohemians, and also among the Poles in Northern Moravia. Soon, however, he was summoned to Rome again in consequence of the allegations of the German priest Wiching, who impugned his orthodoxy, and objected to the use of Slavonic in the liturgy. But John VIII, after an inquiry, sanctioned the Slavonic Liturgy, decreeing, however, that in the Mass the Gospel should be read first in Latin and then in Slavonic. Wiching, in the meantime, had been nominated one of the suffragan bishops of Methodius. He continued to oppose his  metropolitan, going so far as to produce spurious papal letters. The pope, however, assured Methodius that they were false. Methodius went to Constantinople about this time, and with the assistance of several priests, he completed the translation of the Holy Scriptures, with the exception of the Books of Machabees. He translated also the "Nomocanon", i.e. the Greek ecclesiastico-civil law. The enemies of Methodius did not cease to antagonize him. His health was worn out from the long struggle, and he died 6 April, 885, recommending as his successor Gorazd, a Moravian Slav who had been his disciple.
Formerly the feast of Saints Cyril and Methodius was celebrated in Bohemia and Moravia on 9 March; but Pius IX changed the date to 5 July. Leo XIII, by his Encyclical "Grande Munus" of 30 September, 1880, extended the feast to the universal Church.
(Taken from Catholic Encyclopedia)
Posted by Jesus Caritas Est at 9:37 PM No comments:

#PopeFrancis " I know that by looking into the eyes of the Blessed Virgin I am able..." FULL TEXT - Video in Mexico 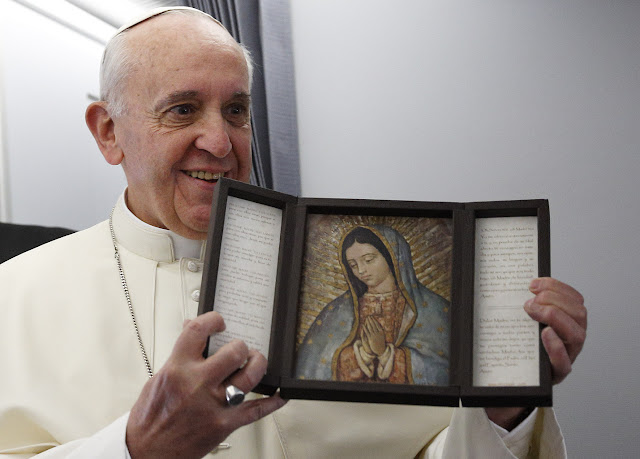 (Vatican Radio) Pope Francis addressed the Catholic Bishops of Mexico on Saturday, the first full day of his Apostolic visit to the country. Below, please find the full text of the Holy Father's prepared remarks, in their official English translation.