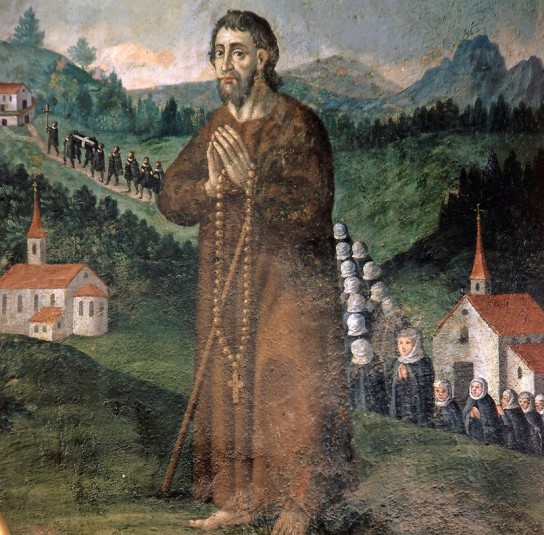 Born 21 March, 1417, on the Flüeli, a fertile plateau near Sachseln, Canton Obwalden, Switzerland; died 21 March, 1487, as a recluse in a neighboring ravine, called Ranft. He was the oldest son of pious, well-to-do peasants and from his earliest youth was fond of prayer, practiced mortification, and conscientiously performed the labor of a peasant boy.
At the age of 21 he entered the army and took part in the battle of Ragaz in 1446. Probably he fought in the battles near the Etzel in 1439, near Baar in the Canton of Zug in 1443, and assisted in the capture of Zürich in 1444. He took up arms again in the so-called Thurgau war against Archduke Sigismund of Austria in 1460. It was due to his influence that the Dominican Convent St. Katharinental, whither many Austrians had fled after the capture of Diessenhofen, was not destroyed by the Swiss confederates. Heeding the advice of his parents he married, about the age of twenty-five, a pious girl from Sachseln, named Dorothy Wyssling, who bore him five sons and five daughters. His youngest son, Nicholas, born in 1467, became a priest and a doctor of theology.
Though averse to worldly dignities, he was elected cantonal councillor and judge. The fact that in 1462 he was one of five arbiters appointed to settle a dispute between the parish of Stans and the monastery of Engelberg, shows the esteem in which he was held. After living about twenty-five years in wedlock he listened to an inspiration of God and with the consent of his wife left his family on 16 October, 1467, to live as a hermit. At first he intended to go to a foreign country, but when he came into the neighborhood of Basle, a divine inspiration ordered him to take up his abode in the Ranft, a valley along the Melcha, about an hour's walk from Sachseln.
Here, known as "Brother Klaus", he abode over twenty years, without taking any bodily food or drink, as was established through a careful investigation, made by the civil as well as the ecclesiastical authorities of his times. He wore neither shoes nor cap, and even in winter was clad merely in a hermit's gown. In 1468 he saved the town of Sarnen from a conflagration by his prayers and the sign of the cross. God also favored him with numerous visions and the gift of prophecy. Distinguished persons from nearly every country of Europe came to him for counsel in matters of the utmost importance. At first he lived in a narrow hut, which he himself had built with branches and leaves, and came daily to Mass either at Sachseln or at Kerns. Early in 1469 the civil authorities built a cell and a chapel for him, and on 29 April of the same year the chapel was dedicated by the vicar-general of Constance, Thomas, Bishop of Ascalon. In 1479 a chaplain was put in charge of the chapel, and thenceforth Nicholas always remained in the Ranft. When in 1480 delegates of the Swiss confederates assembled at Stans to settle their differences, and civil war seemed inevitable, Henry Imgrund, the pastor of Stans, hastened to Nicholas, begging him to prevent the shedding of blood. The priest returned to the delegates with the hermit's counsels and propositions, and civil war was averted. Nicholas was beatified by Pope Clement IX in 1669. Numerous pilgrims visit the chapel near the church of Sachseln, where his relics are preserved. His feast is celebrated on 21 March.
Posted by Jesus Caritas Est at 8:38 PM No comments:

#PopeFrancis "...pray to the Virgin Mary, to help us to live Holy Week with spiritual intensity." #Angelus FULL TEXT - Video 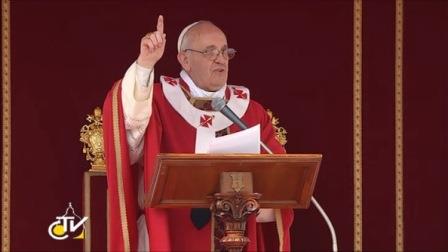 Before the Angelus
I greet all of you who participated in this celebration and all who have joined us via television, radio and other media.
Today, we celebrate the 31st World Youth Day, which will culminate at the end of July in the great world meeting in Krakow. The theme is “Blessed Are the Merciful, for They Will Receive Mercy” (Mt 5,7). My special greeting goes to the young people present here, and extends to all the young people throughout the world. I hope that many of you can come to Krakow, home to St. John Paul II, the founder of World Youth Days. To his intercession, we entrust the final months of preparation for this pilgrimage, in the context of the Holy Year of Mercy, will be the Jubilee of the Young People at the level of the Universal Church.
Here with us are many young volunteers from Krakow. Returning to Poland, they will take to the leaders of the nation the olive branches gathered from Jerusalem, Assisi and Monte Cassino and blessed today in this Square, as an invitation to cultivate intentions of peace, reconciliation and fraternity. Thank you for this wonderful initiative; go forward with courage!
And now we pray to the Virgin Mary, to help us to live Holy Week with spiritual intensity.
[Original text: Italian] [Zenit Translation by Deborah Castellano Lubov]
Posted by Jesus Caritas Est at 10:56 AM No comments: 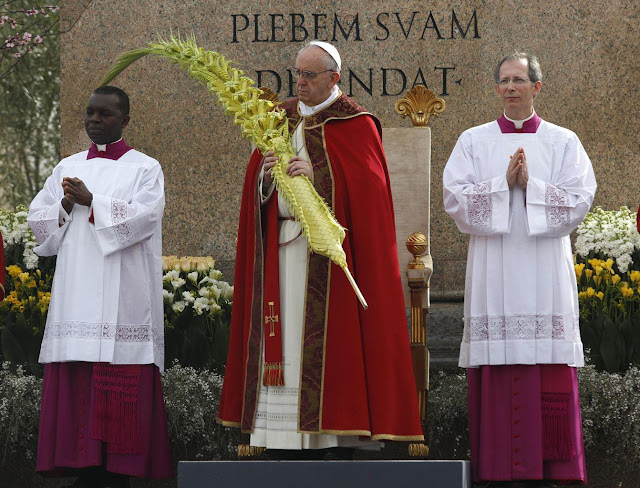 Pope Francis on Sunday presided at the Procession and Mass for Palm Sunday, entering Holy Week.

Below, please find the full text of Pope Francis' prepared homily for Palm Sunday 2016:
Homily of His Holiness Pope Francis
Palm Sunday
20 March 2016
“Blessed is He who comes in the name of the Lord!” (cf. Lk 19:38), the crowd of Jerusalem exclaimed joyfully as they welcomed Jesus. We have made that enthusiasm our own: by waving our olive and palm branches we have expressed our praise and our joy, our desire to receive Jesus who comes to us. Just as He entered Jerusalem, so He desires to enter our cities and our lives. As He did in the Gospel, riding on a donkey, so too He comes to us in humility; He comes “in the name of the Lord”. Through the power of His divine love He forgives our sins and reconciles us to the Father and with ourselves.

Jesus is pleased with the crowd’s showing their affection for Him. When the Pharisees ask Him to silence the children and the others who are acclaiming Him, He responds: “I tell you, if these were silent, the very stones would cry out” (Lk 19:40). Nothing could dampen their enthusiasm for Jesus’ entry. May nothing prevent us from finding in Him the source of our joy, true joy, which abides and brings peace; for it is Jesus alone who saves us from the snares of sin, death, fear and sadness.
Today’s liturgy teaches us that the Lord has not saved us by His triumphal entry or by means of powerful miracles. The Apostle Paul, in the second reading, epitomizes in two verbs the path of redemption: Jesus “emptied” and “humbled” Himself (Phil 2:7-8). These two verbs show the boundlessness of God’s love for us. Jesus emptied Himself: He did not cling to the glory that was His as the Son of God, but became the Son of man in order to be in solidarity with us sinners in all things; yet He was without sin. Even more, He lived among us in “the condition of a servant” (v. 7); not of a king or a prince, but of a servant. Therefore He humbled Himself, and the abyss of His humiliation, as Holy Week shows us, seems to be bottomless.
The first sign of this love “without end” (Jn 13:1) is the washing of the feet. “The Lord and Master” (Jn 13:14) stoops to His disciples’ feet, as only servants would have done. He shows us by example that we need to allow His love to reach us, a love which bends down to us; we cannot do any less, we cannot love without letting ourselves be loved by Him first, without experiencing His surprising tenderness and without accepting that true love consists in concrete service.
But this is only the beginning. The humiliation of Jesus reaches its utmost in the Passion: He is sold for thirty pieces of silver and betrayed by the kiss of a disciple whom He had chosen and called His friend. Nearly all the others flee and abandon Him; Peter denies Him three times in the courtyard of the temple. Humiliated in His spirit by mockery, insults and spitting, He suffers in His body terrible brutality: the blows, the scourging and the crown of thorns make His face unrecognizable. He also experiences shame and disgraceful condemnation by religious and political authorities: He is made into sin andconsidered to be unjust. Pilate then sends Him to Herod, who in turn sends Him to the Roman governor. Even as every form of justice is denied to Him, Jesus also experiences in His own flesh indifference, since no one wishes to take responsibility for His fate. The crowd, who just a little earlier had acclaimed Him, now changes their praise into a cry of accusation, even to the point of preferring that a murderer be released in His place. And so the hour of death on the cross arrives, that most painful form of shame reserved for traitors, slaves and the worst kind of criminals. But isolation, defamation and pain are not yet the full extent of His deprivation. To be totally in solidarity with us, He also experiences on the Cross the mysterious abandonment of the Father. In His abandonment, however, He prays and entrusts Himself: “Father, into your hands I commit my spirit” (Lk 23:47). Hanging from the wood of the cross, beside derision He now confronts the last temptation: to come down from the Cross, to conquer evil by might and to show the face of a powerful and invincible God. Jesus, however, even here at the height of His annihilation, reveals the true face of God, which is mercy. He forgives those who are crucifying Him, He opens the gates of paradise to the repentant thief and He touches the heart of the centurion. If the mystery of evil is unfathomable, then the reality of Love poured out through Him is infinite, reaching even to the tomb and to hell. He takes upon Himself all our pain that He may redeem it, bringing light to darkness, life to death, love to hatred.
God’s way of acting may seem so far removed from our own, that He was annihilated for our sake, while it seems difficult for us to even forget ourselves a little. He comes to save us; we are called to choose His way: the way of service, of giving, of forgetfulness of ourselves. Let us walk this path, pausing in these days to gaze upon the Crucifix, the “royal seat of God”, to learn about the humble love which saves and gives life, so that we may give up all selfishness, and the seeking of power and fame. By humbling Himself, Jesus invites us to walk on His path. Let us turn our faces to Him, let us ask for the grace to understand something of the mystery of His obliteration for our sake; and then, in silence, let us contemplate the mystery of this Week.
Posted by Jesus Caritas Est at 7:57 AM No comments: