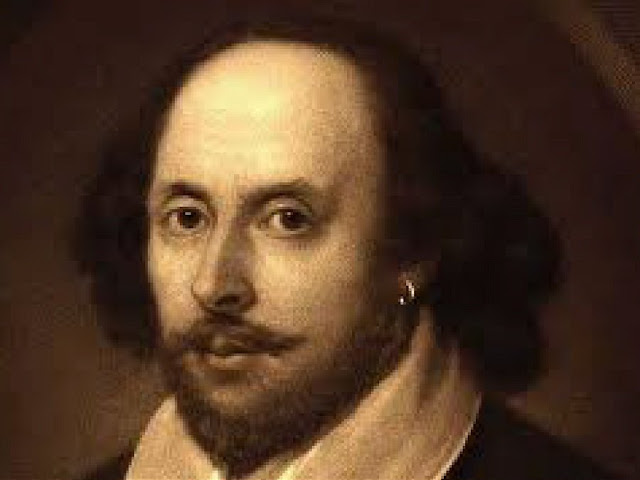 On April 23rd 1616 the playwright William Shakespeare died on his birthday so we now celebrate 400 years of this great playwright.
William Shakespeare was born on April 23 1616. He was an English poet, playwright. He wrote 38 plays, 154 sonnets.  Shakespeare was born in Stratford-upon-Avon, Warwickshire. At 18 years of age, he married Anne Hathaway. They had three children: Susanna, and twins Hamnet and Judith.
1. John Shakespeare William’s father, was identified in 1592 as a recusant, that is a Catholic who refused to attend the services of the Church of England.

2. Fr. John Frith, who officiated the marriage of Shakespear to Anne Hathaway in 1582 in the village of Temple Grafton, was identified by the government in 1586 as a Roman Catholic priest. This Church was at a distance from Shakespeare's home so it is speculated that he went there due to his adherence to the Catholic Church.
3.Shakespeare’s daughter Susanna was named a recusant  onn May 5, 1606 by the government. Shakespeare left all his wealth to her.
4.  Shakespeare purchased Blackfriars Gatehouse in London on March 10, 1613. The gatehouse was rumored to be a hiding place for Catholic priests and had secret tunnels. The Folger Shakespeare Library in Washington, D.C., holds Shakespeare's copy of the deed of purchase.
5. An Anglican minister wrote a statement confirming that Shakespeare died a Catholic. Archdeacon Richard Davies, of Gloucestershire wrote in notes —a collection of biographies written by the Rev. William Fulman—that Shakespeare "dyed a Papyst [died a Papist]."  According to an article first published in 1918 in Old and Sold Antiques Digest, the Fulman manuscript is at Oxford University's Corpus Christi College.

Posted by Jesus Caritas Est at 9:42 PM No comments: 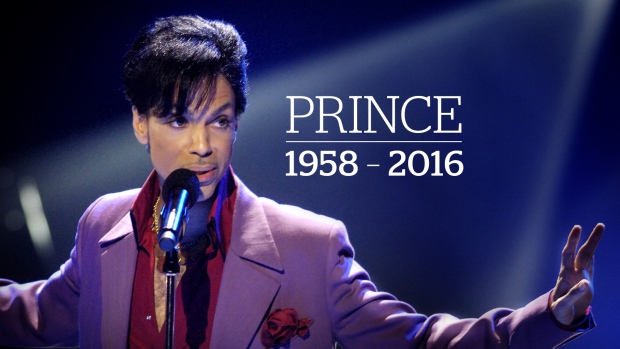 Vatican Cardinal Gianfranco Ravasi, the President of the Pontifical Council for Culture, Tweeted the Lyrics from one of his songs: "Sometimes, sometimes I wish that life was never ending, All good things they say, never last. (#Prince, Sometimes It Snows In April)"
PRINCE Rogers Nelson (June 7, 1958 – April 21, 2016) was a North American singer. He died on April 21, 2016 at the age of 57. Prince was born in Minneapolis. He died at his Paisley Park home in Chanhassen, He had flu-like symptoms in the previous weeks. Prince sold over 100 million records worldwide, His parents were Mattie Della (Shaw) and John Lewis Nelson. His parents were both African American musicians, Prince's sister Tika Evene was born in 1960. When he was 37, he married his 22-year-old backup singer Mayte Garcia in 1996. They had a son named Boy Gregory on October 16, 1996, who was born with Pfeiffer syndrome and died a week later. Prince and Mayte divorced in 1999. In 2001, Prince married Manuela Testolini. She filed for divorce in May 2006. Prince joined the Jehovah's Witnesses in 2001, He attended meetings at a local Kingdom Hall and occasionally knocked on people's doors to discuss the Faith. (Biographical Information from Wikipedia)
In an 1985 Interview below from MTV Prince explains that he believes in God and prays.

Please Pray for his soul....
Posted by Jesus Caritas Est at 6:05 PM No comments:

Wow #PopeFrancis hears Confessions of 16 Teens at Jubilee for Year of Mercy - "Let us forgive!" TEXT Message of Pope to Teens 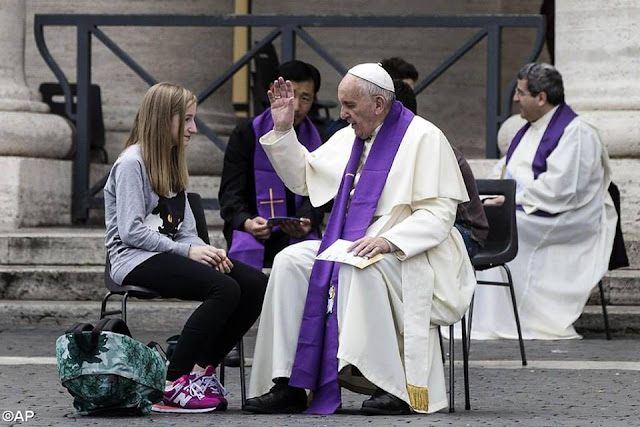 The Jubilee for teens which is part of the Extraordinary Year of Mercy. The theme for this three day event is "Growing merciful as the Father”. 70 thousand teenagers aged 13 to 16 year old from all over the world. There were confessions heard by 150 priests and by Pope Francis himself, in the colonnade of St Peter’s Basilica.  There will be a special Mass Sunday morning in St Peter’s Square with Pope Francis. Pope Francis surprised thousands of teenagers in St. Peter's Square by personally hearing confessions for more than an hour Saturday morning. The Holy Father offered the Sacrament of Reconciliation to 16 teenage boys and girls. beneath the colonnade in front of St Peter’s Basilica. The teens went to  Rome’s Olympic Stadium and saw a video message from the Holy Father.  He said, “Don’t just prepare your rucksacks and your banners – but your hearts and minds as well”. “Being merciful means being able to forgive. And this is not easy, is it? Sometimes it happens that, in my family, at school, in the parish, at the gym, or while we’re having fun, someone does something and we feel offended; or maybe in a nervous moment we offend someone. Let us not remain in that state of anger or desire for revenge! It serves nothing! It’s like a woodworm which eats our soul and doesn’t allow us to be happy. Let us forgive! Let us forgive and forget the offence we’ve received, so that we may understand Jesus’ teaching and be his disciples and witnesses of mercy,” the Pope said. “How often it happens to me to have to call a friend but I can’t get through because there is no service. I’m sure this also happens to you, that you’re cell phone doesn’t connect in some places… Well, remember that if Jesus is not in your life, it’s as if there is no [phone] service! You can’t get in contact with someone and you close yourself off. Let us be where there is service! In your family, parish, or school, so that we will always have something good and true to say in this world.” The Teen Jubilee will be held until Monday April 25th.
Posted by Jesus Caritas Est at 3:47 PM No comments: 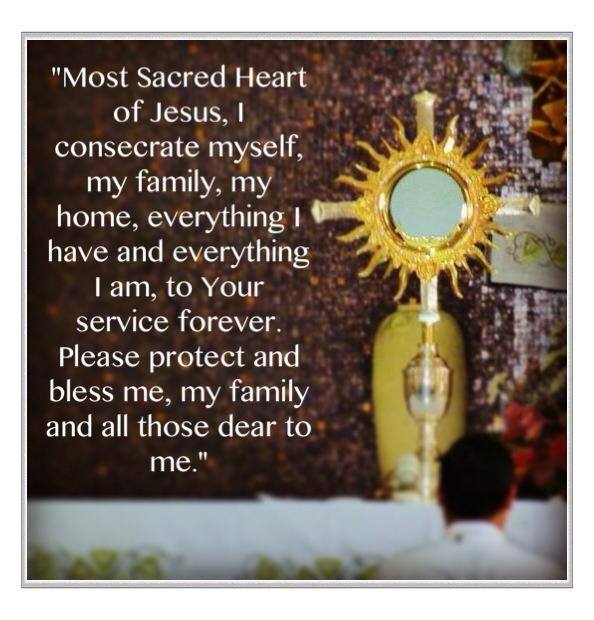 Saturday of the Fourth Week of Easter
Lectionary: 284

On the following sabbath
almost the whole city
gathered to hear the word of the Lord.
When the Jews saw the crowds, they were filled with jealousy
and with violent abuse contradicted what Paul said.
Both Paul and Barnabas spoke out boldly and said,
“It was necessary that the word of God be spoken to you first,
but since you reject it
and condemn yourselves as unworthy of eternal life,
we now turn to the Gentiles.
For so the Lord has commanded us,
I have made you a light to the Gentiles,
that you may be an instrument of salvation
to the ends of the earth.”

Jesus said to his disciples:
“If you know me, then you will also know my Father.
From now on you do know him and have seen him.”
Philip said to Jesus,
“Master, show us the Father, and that will be enough for us.”
Jesus said to him, “Have I been with you for so long a time
and you still do not know me, Philip?
Whoever has seen me has seen the Father.
How can you say, ‘Show us the Father’?
Do you not believe that I am in the Father and the Father is in me?
The words that I speak to you I do not speak on my own.
The Father who dwells in me is doing his works.
Believe me that I am in the Father and the Father is in me,
or else, believe because of the works themselves.
Amen, amen, I say to you,
whoever believes in me will do the works that I do,
and will do greater ones than these,
because I am going to the Father.
And whatever you ask in my name, I will do,
so that the Father may be glorified in the Son.
If you ask anything of me in my name, I will do it.”
Due to technical difficulties Mass starts at 1:15 of video
Posted by Jesus Caritas Est at 2:31 PM No comments: