#Novena to the Holy Spirit for Pentecost to SHARE

ACT OF CONSECRATION TO THE HOLY GHOST

On my knees before the great multitude of heavenly witnesses I offer myself, soul and body to You, Eternal Spirit of God. / I adore the brightness of Your purity the unerring keenness of Your justice and the might of Your love. You are the Strength / and Light of my soul. In You I live and move and am. I desire never to grieve You by unfaithfulness to grace and I pray with all my heart! To be kept from the smallest sin against You. Mercifully guard my every thought and grant that I may always watch for Your light: and listen to Your voice and follow Your gracious inspirations. I cling to You and give myself to You and ask You / by Your compassion to watch over me in my weakness. Holding the pierced Feet of Jesus and looking at His Five Wounds / and trusting in His Precious Blood and adoring His opened Side and stricken Heart / I implore You / Adorable Spirit I Helper of my infirmity, so to keep me in Your grace that I may never sin against You. Give me grace O Holy Ghost, Spirit of the Father and the Son to say to You always and everywhere / "Speak Lord for Your servant heareth." Amen.

Light immortal! Light Divine! Visit Thou these hearts of Thine, And our inmost being fill!
The Gift of Knowledge
The gift of Knowledge enables the soul to evaluate created things at their true worth--in their relation to God. Knowledge unmasks the pretense of creatures, reveals their emptiness, and points out their only true purpose as instruments in the service of God. It shows us the loving care of God even in adversity, and directs us to glorify Him in every circumstance of life. Guided by its light, we put first things first, and prize the friendship of God beyond all else. "Knowledge is a fountain of life to him that possesseth it."
Prayer
Come, O Blessed Spirit of Knowledge, and grant that I may perceive the will of the Father; show me the nothingness of earthly things, that I may realize their vanity and use them only for Thy glory and my own salvation, looking ever beyond them to Thee, and Thy eternal rewards. Amen(Our Father and Hail Mary ONCE. Glory be to the Father 7 TIMES. Act of Consecration, Prayer for the Seven Gifts)

(Vatican Radio) Pope Francis led an in-depth discussion on Thursday about the role of women in the Church, saying he wants to set up a commission to study the possibility of reinstating female deacons. His conversation was part of a question and answer session with some 900 heads of female religious orders and congregations who form part of the International Union of Superiors General, or UISG.
Philippa Hitchen reports:

Pope Francis spoke off the cuff during his closed door encounter with the sisters, who are currently holding their General Assembly in Rome this week, marking the 50th anniversary of the foundation of their organisation.
During the hour and a half long conversation about the mission and ministry of women in religious life, the Pope responded to several delicate questions, including one about the history of female deacons. He said understanding about their role in the early Church remained unclear and agreed it would be useful to set up a commission to study the question.
Women deacons in the early Church
Up to the 5th century, the Diaconate flourished in the western Church, but in the following centuries it experienced a slow decline, surviving only as an intermediate stage for candidates preparing for priestly ordination. Following the Second Vatican Council, the Church restored the role of permanent deacon, which is open to single and married men. Many experts believe that women should also be able to serve in this role, since there is ample evidence of female deacons in the first centuries, including one named Phoebe who is cited by St Paul in his letter to the Romans.
More women in leadership positions
Pope Francis reiterated that he wants to see an increase in the number of women in decision-making positions in the Church, saying women’s perspectives are very important for both the elaboration and the carrying out of such decisions. The integration of women into the life of the Church has been “very weak”, he said, adding that “we must go forward”.
Asked about the possibility of women preaching the homilies during Mass, the Pope said it’s important to distinguish between other types of liturgies, where the sermon can be preached by consecrated or lay women, and the Mass, where the homily is connected to the role of the priest serving “in persona Christi”.
Changes to Canon Law
Questioned about the prospect of changes to Canon Law which would facilitate the reform process being undertaken by many women’s congregations, the Pope said such changes could be possible, providing they were the result of a process of discernment by the competent authorities.
Service not servitude
Finally Pope Francis spoke about the vital work of the sisters who care for the poor and marginalized. He said this is a vocation of service to the Church and must never be confused with servitude, which is sometimes still asked of them. They should not fear being labelled as ‘activists’, in their service to the needy, he said, but they should also find time for rest and for listening to older or sick members of their communities who are a precious source of wisdom and memory.
Posted by Jesus Caritas Est at 3:32 PM No comments: 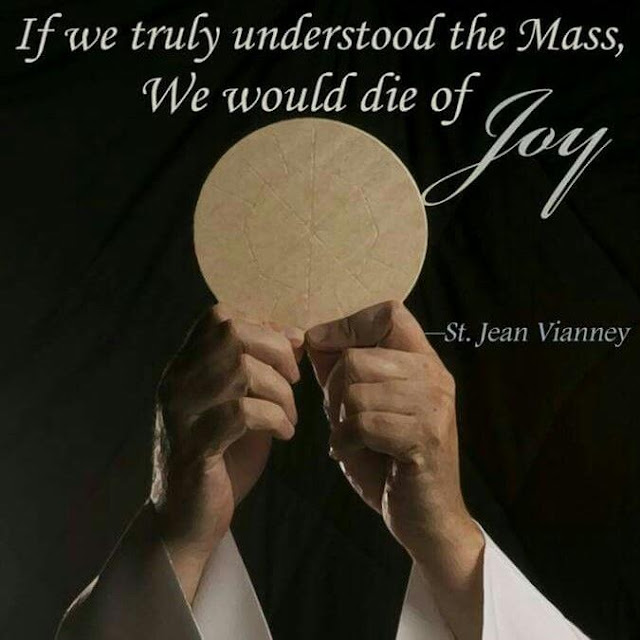 Thursday of the Seventh Week of Easter
Lectionary: 300

Wishing to determine the truth
about why Paul was being accused by the Jews,
the commander freed him
and ordered the chief priests and the whole Sanhedrin to convene.
Then he brought Paul down and made him stand before them.

Paul was aware that some were Sadducees and some Pharisees,
so he called out before the Sanhedrin,
“My brothers, I am a Pharisee, the son of Pharisees;
I am on trial for hope in the resurrection of the dead.”
When he said this,
a dispute broke out between the Pharisees and Sadducees,
and the group became divided.
For the Sadducees say that there is no resurrection
or angels or spirits,
while the Pharisees acknowledge all three.
A great uproar occurred,
and some scribes belonging to the Pharisee party
stood up and sharply argued,
“We find nothing wrong with this man.
Suppose a spirit or an angel has spoken to him?”
The dispute was so serious that the commander,
afraid that Paul would be torn to pieces by them,
ordered his troops to go down and rescue Paul from their midst
and take him into the compound.
The following night the Lord stood by him and said, “Take courage.
For just as you have borne witness to my cause in Jerusalem,
so you must also bear witness in Rome.”

Lifting up his eyes to heaven, Jesus prayed saying:
“I pray not only for these,
but also for those who will believe in me through their word,
so that they may all be one,
as you, Father, are in me and I in you,
that they also may be in us,
that the world may believe that you sent me.
And I have given them the glory you gave me,
so that they may be one, as we are one,
I in them and you in me,
that they may be brought to perfection as one,
that the world may know that you sent me,
and that you loved them even as you loved me.
Father, they are your gift to me.
I wish that where I am they also may be with me,
that they may see my glory that you gave me,
because you loved me before the foundation of the world.
Righteous Father, the world also does not know you,
but I know you, and they know that you sent me.
I made known to them your name and I will make it known,
that the love with which you loved me
may be in them and I in them.”
Posted by Jesus Caritas Est at 2:53 PM No comments: