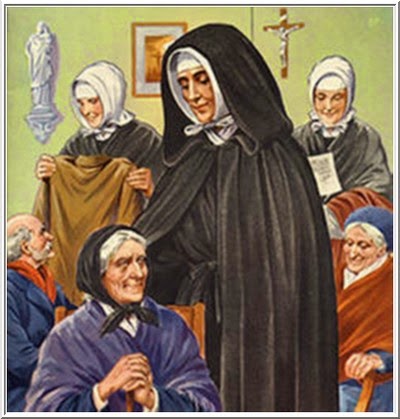 Jeanne Jugan is the foundress and first Little Sister of the Poor. She was beatified by Pope John Paul II on October 3, 1982 and canonized by Pope Benedict XVI on October 11, 2009.

A Saint for old age and every age

Jeanne Jugan gave herself entirely to God and the elderly poor. As our aging population continues to grow and dignity at the end of life is increasingly threatened, Jeanne Jugan offers herself as a friend and patron of the elderly. She is a Saint for old age.

Jeanne barely learned to read and write. Her education consisted mostly of on-the-job training in the school of real life. Neither beautiful nor talented in the usual sense, she was gifted with an extraordinary heart. Jeanne was on fire with love for God!
Those who let themselves be seized by the love of Christ cannot help abandoning everything to follow him… Barely out of her teens, Jeanne felt the call of divine love. Preparing to leave home, she told her mother “God wants me for himself. He is keeping me for a work which is not yet founded.”
Jeanne took the road less traveled, setting out to work among the poor and forsaken in a local hospital.
Jeanne meets Christ in the Poor
Many years went by before Jeanne discovered her vocation. Finally, one cold winter night she met Jesus Christ in the person of an elderly, blind and infirm woman who had no one to care for her. Jeanne carried the woman home, climbed up the stairs to her small apartment and placed her in her own bed. From then on, Jeanne would sleep in the attic.
God led more poor old people to her doorstep. Generous young women came to help. Like Jeanne, they wanted to make a difference. Like her, they believed that “the poor are Our Lord.” A religious community was born!
There were so many old people in need of a home, so many souls hungry for love! The work rapidly spread across France and beyond. Struck by their spirit of humble service, local citizens dubbed the group the Little Sisters of the Poor. The name stuck!
For herself Jeanne chose the religious name Sister Mary of the Cross. She would live it in its fullness.…
Jeanne is grafted into the cross
The work of the Little Sisters continued to spread, borne by the wind of the Spirit. So did Jeanne’s renown—until one day she was mysteriously cast aside by an ambitious priest who had taken over the direction of the young community.
Jeanne was replaced as superior and sent out begging on behalf of the poor. And then one day she was placed in retirement, relegated to the shadows. At the time of her death 27 years later, the young Little Sisters didn’t even know that she was the foundress.
Jeanne had often told them, “We are grafted into the cross and we must carry it joyfully unto death.” How she lived these words! What a radiant example of holiness she gave to generations of Little Sisters!

Shared from Little Sisters of the Poor Website
Posted by Jesus Caritas Est at 11:20 PM No comments:

Novena to St. John the Baptist : Patron of #Baptism, #Monks - #Prayer to SHARE 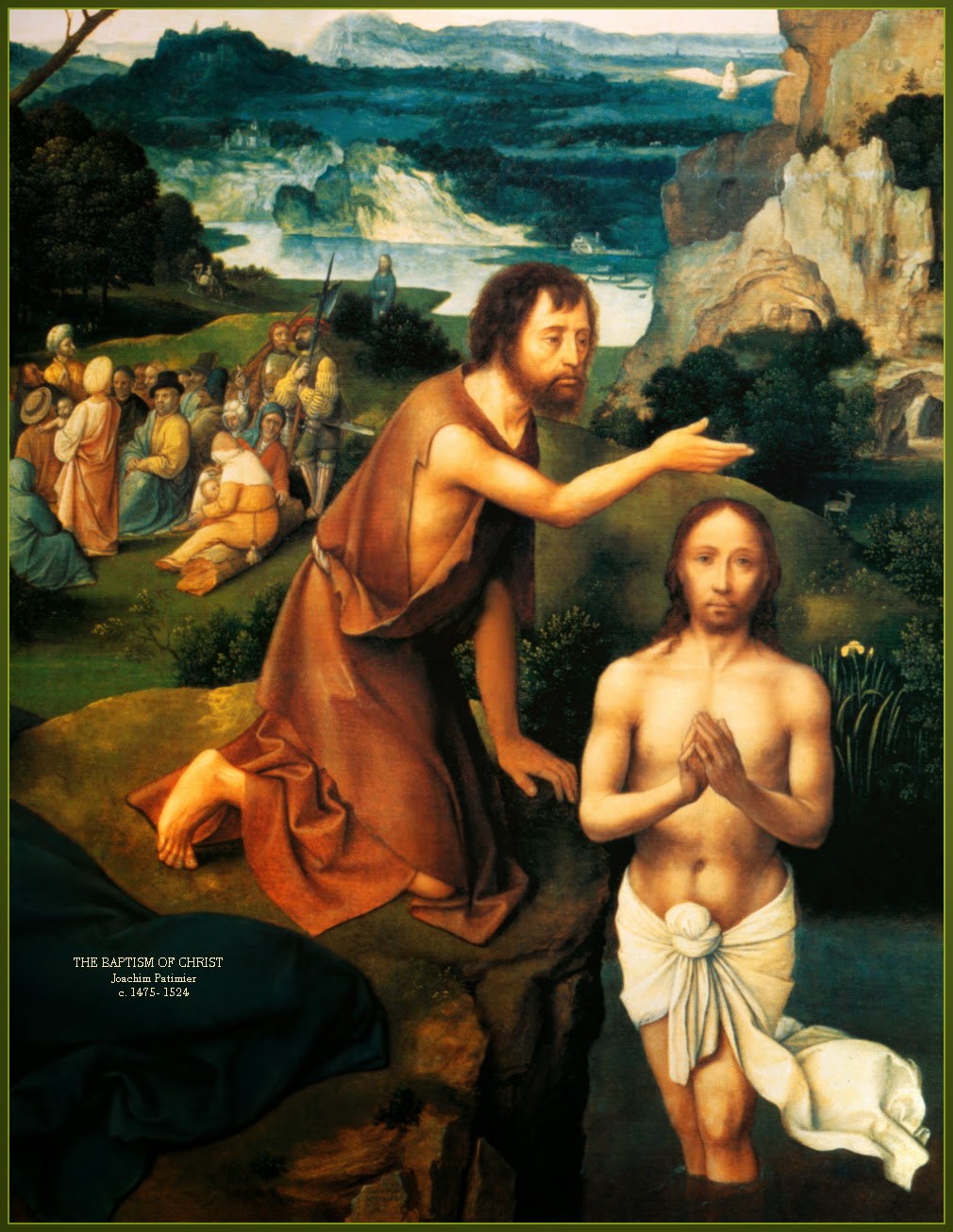 Novena Prayer
O Holy St. John, from all eternity you were chosen
To prepare the way for Our Lord Jesus Christ.
We implore your intercession for ...,
For all of our members in their work
And for all those we serve.

Pray for us that we may receive the courage and strength
To persevere in announcing the Good News of Jesus Christ,
Who came to seek and save the lost,

To heal the broken hearted and to bind up their wounds.

May we be guided by the Holy Spirit
With good words of counsel for those in need.
May we be strengthened by your prayers
And good example as we prepare the way for the
Healing power of Jesus to heal and transform
Those entrusted to our care.

We ask all of this through Our Lord Jesus Christ. Amen.

Say one Our Father, one Hail Mary and one Glory Be.
St. John the Baptist, pray for us!
Posted by Jesus Caritas Est at 9:12 PM No comments: 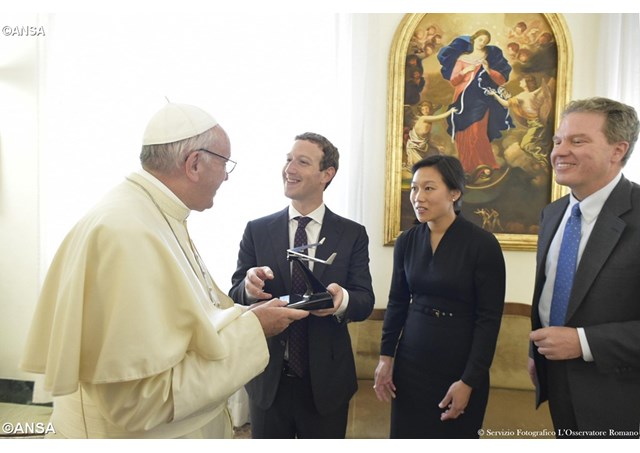 Pope Francis met with Mark Zuckerberg, founder and CEO of Facebook, and his wife, Priscilla Chan, on Monday in a private audience in the Vatican. A statement released by the Holy See Press Office said: “They spoke about how to use communication technologies to alleviate poverty, encourage a culture of encounter, and help deliver a message of hope, especially to those people who are most disadvantaged.” Test shared from Radio Vaticana
Posted by Jesus Caritas Est at 6:16 PM No comments:

Memorial of the Passion of Saint John the Baptist
Lectionary: 431/634

When I came to you, brothers and sisters,
proclaiming the mystery of God,
I did not come with sublimity of words or of wisdom.
For I resolved to know nothing while I was with you
except Jesus Christ, and him crucified.
I came to you in weakness and fear and much trembling,
and my message and my proclamation
were not with persuasive words of wisdom,
but with a demonstration of spirit and power,
so that your faith might rest not on human wisdom
but on the power of God.

Herod was the one who had John the Baptist arrested and bound in prison
on account of Herodias,
the wife of his brother Philip, whom he had married.
John had said to Herod,
“It is not lawful for you to have your brother’s wife.”
Herodias harbored a grudge against him
and wanted to kill him but was unable to do so.
Herod feared John, knowing him to be a righteous and holy man,
and kept him in custody.
When he heard him speak he was very much perplexed,
yet he liked to listen to him.
She had an opportunity one day when Herod, on his birthday,
gave a banquet for his courtiers,
his military officers, and the leading men of Galilee.
Herodias’ own daughter came in
and performed a dance that delighted Herod and his guests.
The king said to the girl,
“Ask of me whatever you wish and I will grant it to you.”
He even swore many things to her,
“I will grant you whatever you ask of me,
even to half of my kingdom.”
She went out and said to her mother,
“What shall I ask for?”
She replied, “The head of John the Baptist.”
The girl hurried back to the king’s presence and made her request,
“I want you to give me at once
on a platter the head of John the Baptist.”
The king was deeply distressed,
but because of his oaths and the guests
he did not wish to break his word to her.
So he promptly dispatched an executioner with orders
to bring back his head.
He went off and beheaded him in the prison.
He brought in the head on a platter and gave it to the girl.
The girl in turn gave it to her mother.
When his disciples heard about it,
they came and took his body and laid it in a tomb.
Posted by Jesus Caritas Est at 10:52 AM No comments: