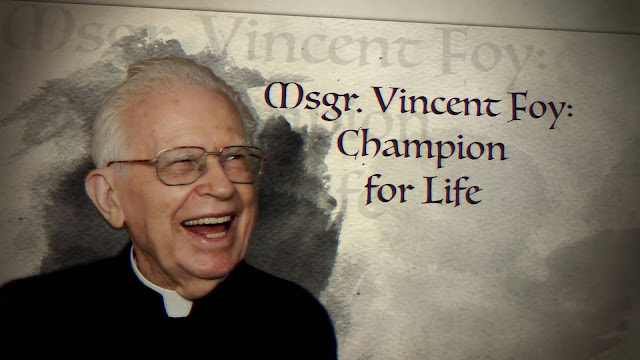 Official Notice of Death from Archdiocese of Toronto:
Reverend Monsignor Vincent N. Foy, P.H. died on Monday, March 13, 2017. Monsignor Foy was 101 years old and in his 78th year of the priesthood. He was ordained to the priesthood on June 3, 1939 by Cardinal McGuigan. Monsignor Foy was the Chancellor of Spiritual Affairs, Associate Judicial Vicar for the Marriage Tribunal and Pastor of St. John’s Parish, Toronto, Holy Martyrs of Japan Parish, Bradford and St. Patrick’s Parish, Phelpston. He retired in 1979 and was in residence at Houses of Providence, Toronto. Each diocesan priest is reminded of our common agreement to offer the Eucharistic Sacrifice for the repose of the soul of a deceased brother priest of the Archdiocese. Funeral Arrangements: VISITATION: Friday, March 17, 2017 2:00 p.m. to 9:00 p.m. Holy Family Parish 1372 King Street West, Toronto FUNERAL: Saturday, March 18, 2017 at 11:30 a.m. Holy Family Parish 1372 King Street West, Toronto (Please note: The Mass will be in the old traditional Latin rite and will not be a concelebrated Mass.) INTERMENT: St. Augustine’s Seminary, Queen of Clergy
Official BIOGRAPHY from the Website of Mons. Foy
Msgr. Foy is a retired priest and canon lawyer of the Archdiocese of Toronto. He was born in Toronto, Ontario on August 14, 1915, second of a family of eight children.  He attended Holy Name Catholic Elementary School and De La Salle High School in Toronto.  In 1933 he entered St. Augustine’s Seminary and was ordained on June 3, 1939 by Archbishop, later Cardinal McGuigan.  He was sent for post-graduate studies to Laval University in Quebec City where he took a doctoral course in Canon Law.  In 1942, he was appointed Vice-Chancellor of the Archdicoese of Toronto and Secretary of the Toronto Archdiocesan Matrimonial Tribunal.  In 1947,  he was named the Secretary of the new Toronto Regional Tribunal, which he served later as Defender of the Bond and Judge.  In 1957, he was named Presiding Judge of the Regional and Archdiocesan Tribunals.  In the same year, he was named a Domestic Prelate by Pope Pius XII.  In a part time capacity for many years, he was Director of Catechetics of the Archdiocese of Toronto.
He is a founder and honorary member of the Canadian Canon Law Society.
He was named pastor of his natal parish of St. John’s in Toronto in 1966 and was there until 1973.  He then served as pastor of Holy Martyrs Church in Bradford and St. Patrick’s Church in Phelpston.  In 1977 and 1978 he lived in Rome in an advocacy capacity.  He served as chaplain for 25 years of the Pro Aliis Club and was chaplain also of the Legion of Mary, has helped religious orders and convents and been active in other groups including the Fellowship of Catholic Scholars.
(Cardinal Collins of Toronto with Msgr. Foy at his 75th anniversary) 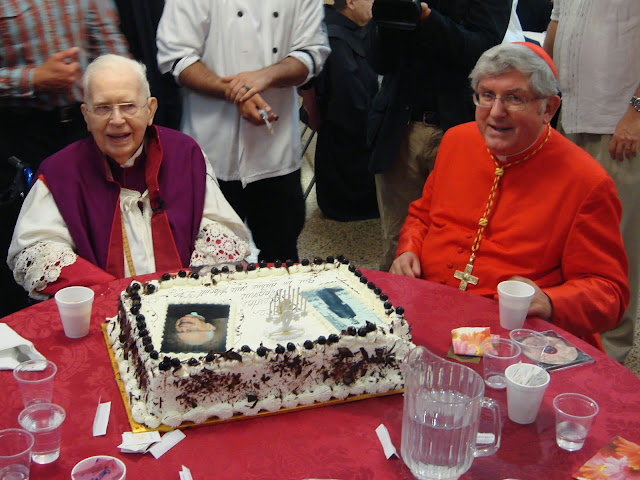 On June 3, 2016, he celebrated his 77th year of his ordination to the holy priesthood and on August 14, 2016, he celebrated his 101st birthday.  Msgr.  Foy is the oldest diocesan priest and has the most years of ordination ever attained in the history of his Archdiocese. He is the only surviving priest of the class of 1939 of St. Augustine’s Seminary.  According to records sought and obtained from nationwide diocesan archives, he has surpassed with more years of ordination all monsignors, bishops, cardinals, canon lawyers, Anglophone diocesan priests and currently living priests in the history of the Church in Canada.
For decades he has fearlessly articulated and defended the teachings of the Church – in a time of moral and doctrinal chaos in the Church in Canada.  He is best known for his untiring defense of Catholic teachings on marriage and family life, Pope Paul VI’s encyclical Humanae vitae.  His efforts have earned him a papal commendation and the Pro-life Man of the Year Award.
Msgr. Foy: Champion for Life -Teaser from DunnMedia on Vimeo.
Posted by Jesus Caritas Est at 11:39 AM