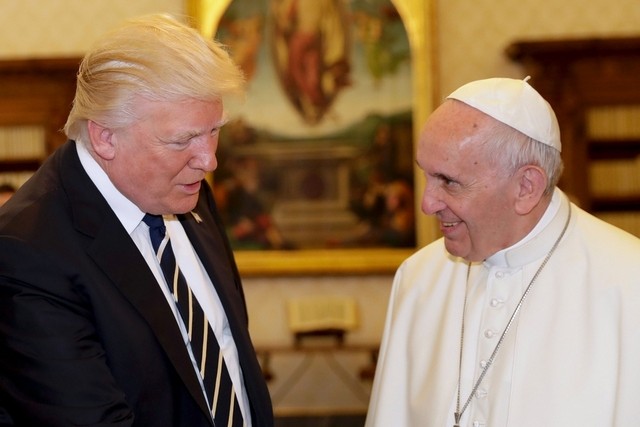 (Vatican Radio) Pope Francis and U.S. President Donald Trump met in the Vatican on Wednesday, discussing issues of peace, interfaith dialogue and religious freedom, as well as the role of the American Church in education, healthcare and support for immigrants.


The American leader spent half an hour in conversation with the Pope behind closed doors in the Apostolic Palace, before meeting with Vatican Secretary of State, Cardinal Pietro Parolin, and Archbishop Paul Gallagher, the Holy See’s Secretary for Relations with States or foreign minister.
Press office statement
A statement from the Vatican press office said during the course of the cordial encounter, the two men discussed the good bilateral relations that exist between the U.S. and the Holy See. They also spoke of their “common commitment in favour of life, religious liberty and freedom of conscience”.
The statement expressed the hope for a “serene cooperation between the State and the Catholic Church in the United States, which is committed to serving the population in the fields of health care, education and assistance to immigrants.
Dialogue and negotiations
It said the Pope and the President also exchanged views on international affairs and on the promotion of peace through political negotiations and interfaith dialogue, mentioning especially the situation in the Middle East and the protection of Christian communities.
Trump, who was accompanied by his wife Melania, as well as his daughter and son-in-law, is on the third leg of a nine day presidential tour that has already taken him to Saudi Arabia, Israel and Palestine.
Sistine chapel visit
After the papal audience, Trump was taken on a tour of St Peter’s Basilica and the Sistine Chapel, before meeting with Italian President Sergio Mattarella and with Prime Minister Paolo Gentiloni.
Melania Trump, meanwhile, visited Rome’s 'Bambin Gesù' Children’s Hospital, while the president's daughter, Ivanka, was scheduled to meet with victims of trafficking together with members of Rome's Sant’Egidio lay Catholic community
.