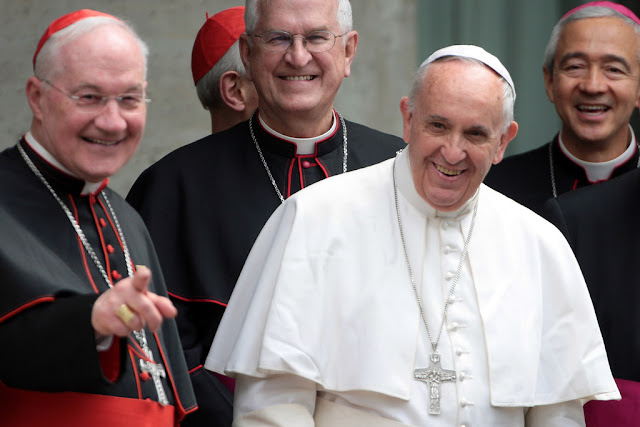 Two High Ranking Cardinals have recently defended Pope Francis and "Amoris Laetitia" (The Joy of Love). (FULL VIDEO of talk below starts at 38min) At the recent  2017 Plenary Assembly of the Catholic Bishops of Canada,  which began on 25 September at the Nav Canada Centre, Cornwall, Ontario, Cardinal Marc Ouellet gave a talk on Amoris laetitia. Cardinal Marc Ouellet is the Prefect of the Bishops' Congregation. He commented saying “Any alarmist interpretation”  is “a break with tradition,” or a “permissive interpretation that celebrates access to the sacraments”. Interpretations of the post-synodal apostolic exhortation "Amoris laetitia" should conceded that the papal letter contained no change in doctrine or sacramental discipline, but a pastoral approach. It takes "the goodness of the person" into consideration in their personal circumstances, said Cardinal Ouellet. He said, the document must be "read as a whole".

"Amoris Laetitia" followed synods on the family held in 2014 and 2015, and “deserves more attention in itself than merely the public debate”.
These comments come after the 62 theologians and Dubia placed objections to this document. Pope Francis suggests that Chapters 4 and 5 are the “centre of the document” according to Cardinal Ouellet. Naturally, the document “must be read as a whole” for the understanding of “limits and extent of the pastoral orientations.” He suggests that critical comments have been “removed from their context.”
“We must re-read Amoris Laetitia in a spirit of pastoral conversion,” and with “receptivity to papal teaching,” to aid the societies that are “far from the faith” to experience the “joy of the Gospel that emerges from faith,” said Ouellet.
Cardinal Gerhard Müller, the former Prefect of the Congregation for the Doctrine of the Faith, was  appointed by Pope Benedict XVI in 2012 and held office until 2017. He also recently spoke on AL.  In an Interview with the National Catholic Register he said:

Magisterial documents are the product of a process of theological preparation; and in former times we were given the names of theologians who had made a draft or had added any points or reflections to it. But in the end, what is decisive is the authority of the Pope. An apostolic exhortation of Pope Francis, and all that he says concerning doctrine, has a magisterial authority. It’s binding according to the range of that particular declaration. It does not contain any “new dogma,” but is, rather, an exposition of dogma always held and taught by the Church.
In Amoris Laetitia there’s no new doctrine or explication of some juridical points of the doctrine, but an acceptance of the doctrine of the Church and the sacraments. The only question is their pastoral application in extraordinary situations. The Pope will not and cannot change either the doctrine or the sacraments. What he wants is to help couples in very difficult circumstances as a good shepherd, but in accord with the word of God.
Near the end of the Interview, Cardinal Mueller stated:
"But I firmly maintain my fidelity to Pope Francis, to whom I devoted myself as a loyal cooperator."
FULL Video Below with Entire talk of Cardinal Ouellet on AL starts at 38min: