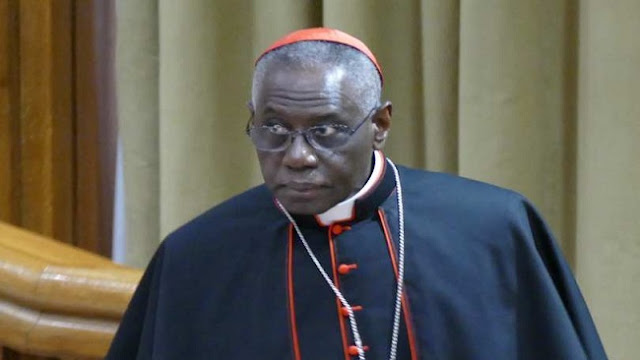 ROMEREPORTS TEXT: Pope clarifies interpretation by the prefect of the Congregation for Divine Worship  In September, Pope Francis modified the regulations for the translation of liturgical texts. Through the Motu Proprio, Magnum Principium or “The Great Principle” in English, the pope established that from now on the episcopal conferences, and not the Vatican, will approve liturgical translations. The Apostolic See will simply ratify what the local bishops have approved. However, Cardinal Sarah wrote his understanding of the Motu Proprio in a French Catholic journal and it was picked up by many other sites. He explained that the change did not alter the responsibility of the Holy See or its competence with regard to liturgical translations. When seeing the distribution of the note, the pope decided to intervene and to make a letter public to clarifies the alterations in the Motu Proprio. Now the episcopal conferences will have greater responsibility to make sure “each language is safeguarded,” and “the sense of the original text is rendered fully and faithfully when approving the translations.” Above all, the pope is trying to eliminate the feeling that Rome is imposing the interpretations, but it is now entrusted to the individual Bishops' Conferences. Pope Francis asked the cardinal to make this clarification public and send his letter “to all Episcopal Conferences” and to “the members and consultors” of the congregation that he heads in order to avoid any kind of misunderstanding. The pope also sincerely thanked the cardinal for his work.
Father Thomas Rosica Post from FB with explanation:

Pope Francis writes corrective and clarifying letter to Cardinal Robert Sarah
Pope Francis has sent a rare, corrective and clarifying letter to Cardinal Robert Sarah to "express simply" and "clearly" some remarks on Motu proprio Magnum Principium on the translations of the liturgical texts and biblical texts. In the document - made public by the Holy See Press Room - addressed to the Prefect of the Congregation for Divine Worship and the Discipline of the Sacraments, the Pope emphasizes first of all the "clear difference" that the new Motu proprio establishes between recognitio (recognition) and confirmatio (confirmation). These, the Pontiff recalls, are not "synonymous" or "interchangeable". And this, he says, "to repeal the practice adopted by the Dicastery following the Liturgiam authenticam and that the new Motu Proprio had wanted to change."
Regarding the responsibility of the Episcopal Conferences to "translate faithfully (faithfully)," Pope Francis emphasizes, "it should be made clear that the judgment about Latin fidelity and any necessary corrections was the task of the Dicastery, while now the new norm grants the Episcopal Conferences the right to judge the authenticity and consistency of one and the other terms in translations from the original, along with dialogue with the Holy See. " Confirmation, the Pope adds, "does not necessarily mean a detailed word-by-word examination, except in the obvious cases that can be brought to the bishops for their further reflection." This is still stated in the letter, "it is particularly relevant for the relevant formulas, for example with the Eucharistic Prayers and especially the sacramental formulas approved by the Holy Father."
Pope Francis reiterates in his letter to Cardinal Sarah, "recognitio only indicates the verification and preservation of conformity to the law and communion of the Church." That is why, he adds, "the process of translating relevant liturgical texts (i.e. sacramental formulas, the Creed, Our Father) into a language - from which they are considered authentic translations - should not lead to a 'imposition' to the Episcopal Conferences of a given translation made by the Dicastery, as this would undermine the right of the Bishops." For the Pope it is therefore "incorrect to attribute to confirmation the purpose of recognitio (i.e. to" verify and safeguard compliance with law").
The “confirmation” (confirmation) still notes, "It is not a purely formal act but necessary for the edition of the liturgical book translated. It is granted after the version has been submitted to the Apostolic See for the ratification of the Bishops' approval in a spirit of dialogue and help to reflect if and when necessary, respecting their rights and duties, considering the legality of the process being followed and its ways. "
The Pope finally refers to the note "Commentaire", sent by Cardinal Sarah to the Pope on September 30, and "published on some websites and erroneously attributed to his person." "I ask you kindly," concludes Francesco, addressing the cardinal, "to provide for the dissemination of my reply to the same sites and to send it to all Episcopal Conferences, Members and Consultors of this Dicastery." 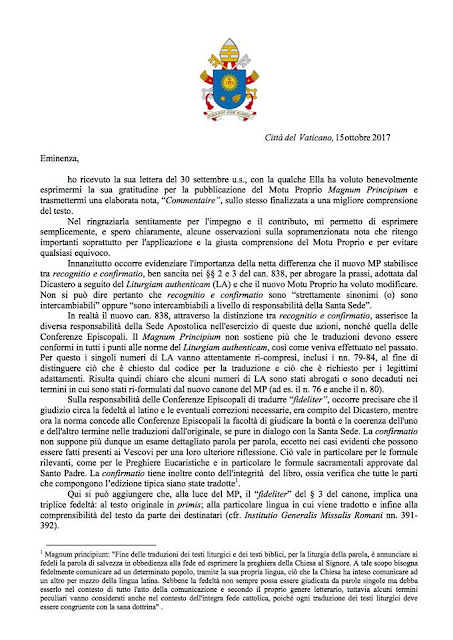 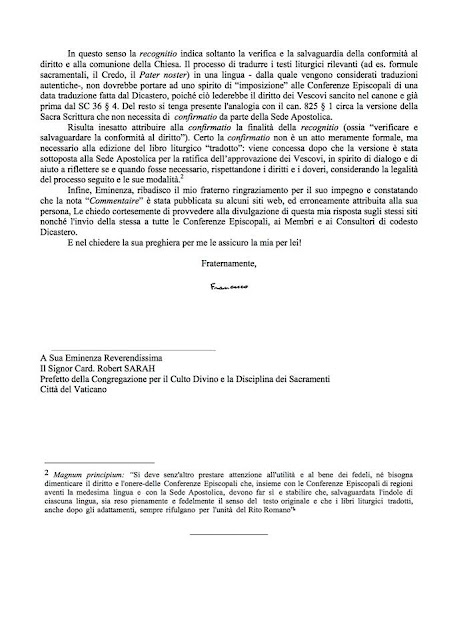 Posted by Jesus Caritas Est at 9:41 AM