#PopeFrancis ".. a conversion of hearts is necessary, an opening to God and neighbor..." to Humanitarian Law Conference 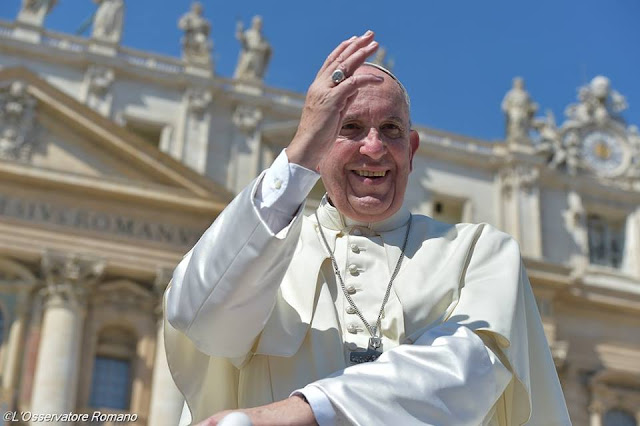 Vatican.va FULL TEXT (Google Trans.) ADDRESS OF HIS HOLY FATHER FRANCESCO
TO THE PARTICIPANTS AT THE CONFERENCE ON INTERNATIONAL HUMANITARIAN LAW

I am delighted to welcome you and thank the Honorable Ministers of the Italian Government for the words with which they introduced this meeting. I cordially welcome the present and all participants of the 3rd Conference on International Humanitarian Law, which deals with "The Protection of Civilian Populations in Conflict - The Role of Humanitarian and Civil Society Organizations".

This theme is particularly significant on the occasion of the 40th anniversary of the adoption of the two Additional Protocols to the Geneva Conventions on the Protection of Victims of Armed Conflict. Convinced of the essentially negative nature of the war and that man's most aspired aspiration is the abolition of the same, the Holy See has ratified these two agreements in order to encourage a "humanization of the effects of armed conflict." [1] It has not failed to appreciate, in particular, provisions relating to the protection of the civilian population and the indispensable goods for its survival, respect for health and religious staff, and the protection of cultural and religious assets, as well as of the natural environment common house. The Holy See, however, aware of the omissions and hesitations that characterize above all the Second Additional Protocol, namely the protection of victims of non-international armed conflicts, continues to consider these instruments as an open door to further developments in international humanitarian law [ 2] who can adequately take into account the characteristics of contemporary armed conflicts and the physical, moral, and spiritual sufferings that accompany them.
Indeed, in spite of the laudable attempt to reduce, through the codification of humanitarian law, the negative consequences of hostilities on the civilian population, too often come from various theaters of war, evidence of atrocious crimes, real offenses against people and their dignity, committed in contempt of every elementary consideration of humanity. Images of lifeless people, of mutilated or decapitated bodies, of our brothers and sisters tortured, crucified, burned alive, offended even in their remains, interrogate the conscience of humanity. On the other hand, there is news of ancient cities, with their millennial cultural treasures, reduced to rubble rubble, hospitals and schools made of deliberate and destroyed attacks, thus depriving entire generations of their right to life, health and education. How many churches and other places of worship are subject to targeted aggression, often just during liturgical celebrations, with numerous victims among the faithful and ministers gathered in prayer, in violation of the fundamental right to freedom of religion! Sometimes, unfortunately, the dissemination of this information can result in some saturation that anesthesizes and, to some extent, relativises the severity of the problems so that it is more difficult to move to compassion and open their conscience in a solid sense. [3] For this to happen, a conversion of hearts is necessary, an opening to God and neighbor, which drives people to overcome indifference and to live solidarity, as moral virtue and social attitudes, from which a commitment can be 'suffering humanity. [4]

At the same time, however, it is encouraging to see the many demonstrations of solidarity and charity that are not lacking in times of war. There are so many people, many charitable groups and non-governmental organizations within and outside the Church whose members face fatigue and dangers to cure the injured and the sick, to bury the dead, [5] to bring food to the hungry and to drink the thirsty, to visit the inmates. Really relief to the peoples of the conflicts is accompanied by various works of mercy, upon which we will be judged at the end of our lives. Can humanitarian organizations always act in accordance with the fundamental principles of humanity, impartiality, neutrality and independence. I therefore hope that these principles, which are the heart of humanitarian law, can be welcomed in the consciences of fighters and humanitarian workers to be translated into practice. [6] Where humanitarian law knows hesitation and omission, knowing individual conscience recognizes the moral duty of respecting and protecting the dignity of the human person in all circumstances, especially in situations where it is most strongly threatened. For this to be possible, I would like to recall the importance of prayer and to ensure, alongside technical and legal training, the spiritual accompaniment of fighters and humanitarian workers.
Dear brothers and sisters, to all those - and amongst you are not a few of you - who have endangered their lives to save another or to relieve the suffering of populations affected by armed conflict, the words of Jesus are addressed in Matthew's Gospel: "All you did to one of these my little brothers, you did it to me" (Mt 25: 40). I entrust you to the intercession of Blessed Virgin Mary, Queen of Peace, and while I beg you also to pray for me, I heartily impart apostolic blessing to you and to your families.