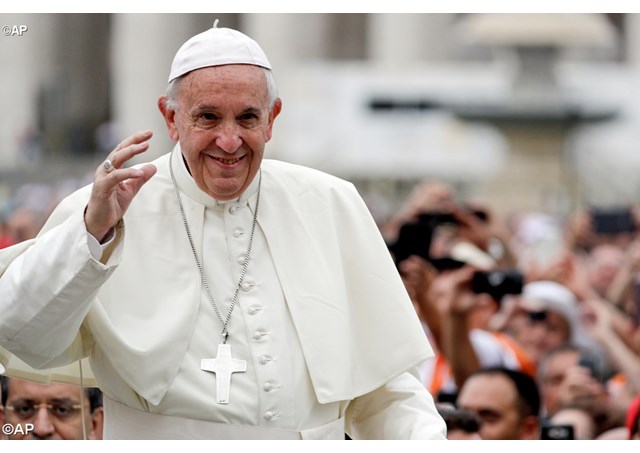 Pope Francis to participants in the plenary assembly of the Vatican’s Pontifical Council for Culture. This occurred at the conclusion of their Nov.15-18 assembly which discussed the theme, “The Future of Humanity: New Challenges to Anthropology.”

I welcome you and I thank Cardinal Gianfranco Ravasi for his greeting and introduction. This Plenary Assembly has chosen the anthropological issue as a theme, proposing to understand the future lines of development of science and technology. Among the many possible arguments of discussion, your focus has focused on three subjects.

First, medicine and genetics, allowing us to look into the intimate structure of the human being and even intervene to modify it. They make us able to eradicate illnesses which are believed to be incurable until recently; but they also open the possibility of determining humans "by programming", so to speak, some qualities.

Secondly, neuroscience offers more and more information on the functioning of the human brain. Through them, fundamental realities of Christian anthropology such as the soul, self-conscience, and freedom are now in an unprecedented light, and may even be some of those seriously questioned.

Finally, the incredible progress of autonomous and thinking machines, which have already become part of our daily lives, lead us to reflect on what is specifically human and makes us different from machines.

All these scientific and technical developments induce some to think that we are in a singular moment in the history of humanity, almost at the dawn of a new era and the birth of a new human being, superior to what we have known so far.
In fact, the questions and issues we are facing are serious and serious. They have been partly anticipated by literature and science fiction films, echoed by fears and expectations of men. For this reason, the Church, who follows carefully the joys and hopes, the anguish and fears of men of our time, wants to put the human person and the issues that concern him in the center of his reflections.

The question about the human being: "What is man ever since you remember him?" (Ps 8,5) resounds in the Bible from his earliest pages and has accompanied the whole path of Israel and the Church. To this question, the Bible itself has offered an anthropological response that is already outlined in Genesis and runs through all Revelation, developing around the fundamental elements of the relationship and freedom. The relationship draws on a threefold dimension: towards matter, land and animals; towards divine transcendence; towards other human beings. Freedom expresses itself in self-reliance - and naturally relative - and in moral choices. This fundamental plant has for centuries ruled the thought of much of mankind and still maintains its validity today. But, at the same time, today we realize that the great principles and fundamental concepts of anthropology are rarely put into question even on the basis of a greater awareness of the complexity of the human condition and require a further deepening.

Anthropology is the horizon of self-understanding in which we all move and determine our own concept of the world and the existential and ethical choices. In our days, it has often become a fluid, changing landscape, due to socio-economic changes, population shifts and intercultural intercourse, but also the spread of a global culture and, above all, incredible discoveries of science and of the technique.

How to react to these challenges? First of all, we must express our gratitude to the men and women of science for their efforts and for their commitment to humanity. This appreciation of the sciences, which we have not always been able to manifest, finds its ultimate foundation in the design of God who "chose us before the creation of the world [...] predestining us to be his adopted children" (Eph 1: 3-5) and who entrusted us with the care of creation: "cultivating and guarding" the earth (cf. Gen 2.15). Precisely because man is the image and likeness of a God who created the world for love, the care of the whole creation must follow the logic of gratuity and love, of service, and not of domination and bullying.

Science and technology have helped us to deepen the boundaries of knowledge of nature and, in particular, of the human being. But they alone do not have to give all the answers. Today, we increasingly realize that it is necessary to draw on the treasures of wisdom preserved in religious traditions, popular wisdom, literature and the arts that touch the depth of the mystery of human existence, without forgetting, rather rediscovering those contained in philosophy and in theology.

How did I say in the Encyclical Laudate yes: "The urgent need for humanism becomes current, calling for the various knowledge [...] for a more complete and integral vision" (No. 141), to overcome the tragic division between the "two cultures", the humanistic-literary-theological and the scientific one, which leads to mutual impoverishment, and to encourage greater dialogue between the Church, community of believers and the scientific community.
The Church, for its part, offers some great principles to support this dialogue. The first is the centrality of the human person, which is to be considered an end and not a means. It must be related in harmony with creation, therefore, not as a despot about God's inheritance, but as a loving guardian of the work of the Creator.

The second principle to remember is that of the universal destination of goods, which also concerns knowledge and technology. Scientific and technological progress serves the good of all humanity, and its benefits can only benefit a few. In this way, it will be avoided that the future adds new inequalities based on knowledge, and increases the gap between the rich and the poor. Great decisions on the orientation of scientific research and investment on it are taken from the whole of society and not dictated solely by market rules or by the interest of few.

Finally, the principle remains that not all that is technically possible or feasible is therefore ethically acceptable. Science, like any other human activity, knows that there are limits to be observed for the good of humanity itself, and requires a sense of ethical responsibility. The true measure of progress, as Blessed Paul VI recalled, is that which is aimed at the good of every man and man.

I thank all of you, Members, Consultors and Collaborators of the Pontifical Council for Culture, because you are doing a valuable service. I invoke upon you the abundance of the Lord's blessings, and I ask you, please, to pray for me. Thank you.
Text Source VATICAN. VA - Google Translation
Posted by Jesus Caritas Est at 10:58 AM