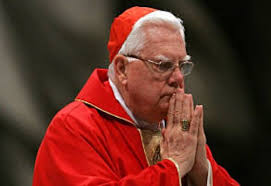 Vatican News Release: The former Archbishop of Boston, Cardinal Bernard Francis Law has died in Rome.
Cardinal Bernard Francis Law has died in Rome following a long illness. Archbishop emeritus of Boston and Archpriest emeritus of the Basilica of Saint Mary Major in Rome, he was 86 years old. Ordained priest in 1961, he was appointed Archbishop of Boston in 1984 where he worked to promote ecumenical dialogue and Catholic-Jewish relations. In 2002 he resigned from his position in Boston following accusations that he had covered up cases of abuse against minors.
BIOGRAPHY OF CARDINAL BERNARD FRANCIS LAW Cardinal Bernard Francis Law, Archpriest emeritus of the Papal Liberian Basilica of St. Mary Major in Rome and Archbishop emeritus of Boston (USA), was born on 4 November 1931 in Torreón, Mexico, son of a U.S. Air Force colonel. He finished his studies at Harvard University in Cambridge, Massachusetts; entered St. Joseph's Seminary at St. Benedict, Los Angeles and from 1955 to 1961, studied at the Pontifical Josephinum College at Worthington, Ohio.

He was ordained a priest for the diocese of Natchez-Jackson (now Jackson) on 21 May 1961. From 1963-1968 he was the editor of the Natchez-Jackson, Miss. diocesan newspaper; from 1968-1971 he was the director of the NCCB committee on ecumenical and interreligious affairs.
On 22 October 1973 he was appointed Bishop of Springfield-Cape Girardeau in Montana and received episcopal ordination on 5 December 1973.
In 1975 he invited to his diocese all 166 members of the Vietnamese religious order, the Congregation of Mary Coredemptrix, and two years later ordained to the priesthood twelve members of this religious institute.
Succeeding Cardinal Humberto Medeiros, he was appointed by John Paul II on 11 January 1984 Archbishop of Boston, the third largest ecclesiastical see in the U.S. He set out as objectives for the pastoral administration of the archdiocese: personal spiritual renewal of the faith, evangelization, social justice and peace, catechesis of the Catholic faith, and vocations. His first pastoral letter emphasized the need to strengthen parish life, at the heart of which is the liturgy.
The cardinal of Boston has often been the spokesman for Catholics in the United States on behalf of Christian unity and the progress of Catholic-Jewish relations. His vast experience acquired in this area has been put at the disposition of the universal Church as consultor to the commission for the religious relations with Judaism (1976-1981) and as member of the Secretariat for Christian Unity. In 1981 he was appointed Vatican delegate to oversee the acceptance of Episcopalian converts into the Catholic priesthood.
He has also held several posts within the U.S. National Catholic Conference of Bishops.
Archbishop emeritus of Boston, 13 December 2002.
Archpriest of the Patriarchal (now Papal) Liberian Basilica of St. Mary Major in Rome, 27 May 2004- 21 November 2011.
He participated in the conclave of April 2005, which elected Pope Benedict XVI.
Created and proclaimed Cardinal by St. John Paul II in the Consistory of 25 May 1985, of the Title of S. Susanna (St. Susanna).

"Cardinal Bernard F. Law, my predecessor as Archbishop of Boston, has passed away at the age of 86 following a prolonged illness. I recognize that Cardinal Law’s passing brings forth a wide range of emotions on the part of many people. I am particularly cognizant of all who experienced the trauma of sexual abuse by clergy, whose lives were so seriously impacted by those crimes, and their families and loved ones. To those men and women, I offer my sincere apologies for the harm they suffered, my continued prayers and my promise that the Archdiocese will support them in their effort to achieve healing.
As Archbishop of Boston, Cardinal Law served at a time when the Church failed seriously in its responsibilities to provide pastoral care for her people, and with tragic outcomes failed to care for the children of our parish communities. I deeply regret that reality and its consequences. Since the day I arrived in the Archdiocese of Boston, my primary objective has been to work for healing and reconciliation among survivors, their families and the wider community of Catholics for whom the abuse crisis was a devastating experience and a great test of faith. In the midst of these groups that were most affected have stood priests and religious sisters of the Archdiocese who have tried to minister to any and all seeking assistance, even when they have been deeply challenged by the crisis that unfolded in the Church.
It is a sad reality that for many Cardinal Law’s life and ministry is identified with one overwhelming reality, the crisis of sexual abuse by priests. This fact carries a note of sadness because his pastoral legacy has many other dimensions. Early in his priesthood in Mississippi Cardinal Law was deeply engaged in the civil rights struggle in our country. Later, he served in the Archdiocese and nationally as a leader in the ecumenical and interfaith movement following the Second Vatican Council, developing strong collaborative relationships with the Greek Orthodox and Jewish communities in Boston. He was well known for visiting the sick, the dying and the bereaved at all hours of the night and day, a ministry that extended to the rich and poor, the young and elderly, and people of all faiths. He also held the care for immigrants and their families in a special place in his ministry.
In the Catholic tradition, the Mass of Christian Burial is the moment in which we all recognize our mortality, when we acknowledge that we all strive for holiness in a journey which can be marked by failures large and small. Cardinal Law will be buried in Rome where he completed his last assignment. I offer prayers for him and his loved ones as well as for all the people of the Archdiocese."
Posted by Jesus Caritas Est at 7:23 PM