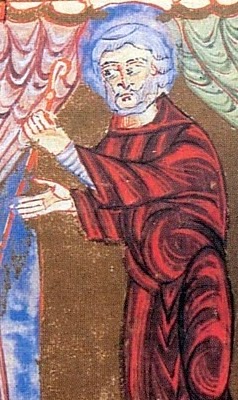 Winebald is one of those amazing English missionaries who evangelized Europe, leaving behind a flourishing Catholicism and a number of monasteries and laying the beginnings of Christianity in what is now Germany, France, Holland, Austria, Belgium, and Luxembourg.
St. Winebald was the son of a West Saxon nobleman, St. Richard, and the brother of St. Willibald. With his father and brother he made a pilgrimage to Rome in 721. His father died in Italy, and Winebald remained in Rome for further study, like his countrymen before him, St. Wilfrid and St. Benedict Biscop. He returned to England and brought back to Rome some of his relatives to begin a monastic life in the holy city.
When St. Boniface came to Rome in 739, he recruited Winebald for the German missions, ordained him a priest, and put him in charge of churches in Germany and Bavaria. His brother, Willibald, who was now bishop of Eichstatt, asked Winebald to found a monastery for the training of priests and as a center of learning. Their sister, St. Walburga, came from England to found a convent, and both the monastery and the convent were founded at Heidenheim.
He established the rule of St. Benedict in his monastery, and Heidenheim became an important center of learning in the missionary territory. Because of illness, Winebald was not able to carry on the missionary work that he desired and yearned to end his days at Monte Cassino.
In 761, Winebald visited St. Boniface's shrine at Fulda and on the way home to  Heidenheim became very sick. When he reached Heidenheim, he became weaker and weaker and after giving his monks a few last words he died on December 18, 761. His tomb became a local shrine and the site of pilgrimages.
SOURCE EWTN
Posted by Jesus Caritas Est at 11:33 PM