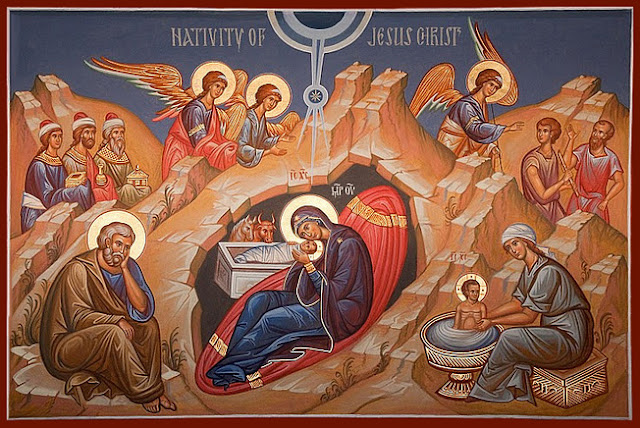 The Sixth Day in the Octave of Christmas
Lectionary: 203

I am writing to you, children,
because your sins have been forgiven for his name's sake.

I am writing to you, fathers,
because you know him who is from the beginning.

I am writing to you, young men,
because you have conquered the Evil One.

I write to you, children,
because you know the Father.

I write to you, fathers,
because you know him who is from the beginning.

I write to you, young men,
because you are strong and the word of God remains in you,
and you have conquered the Evil One.

Do not love the world or the things of the world.
If anyone loves the world, the love of the Father is not in him.
For all that is in the world,
sensual lust, enticement for the eyes, and a pretentious life,
is not from the Father but is from the world.
Yet the world and its enticement are passing away.
But whoever does the will of God remains forever.

There was a prophetess, Anna,
the daughter of Phanuel, of the tribe of Asher.
She was advanced in years,
having lived seven years with her husband after her marriage,
and then as a widow until she was eighty-four.
She never left the temple,
but worshiped night and day with fasting and prayer.
And coming forward at that very time,
she gave thanks to God and spoke about the child
to all who were awaiting the redemption of Jerusalem.

When they had fulfilled all the prescriptions
of the law of the Lord,
they returned to Galilee,
to their own town of Nazareth.
The child grew and became strong, filled with wisdom;
and the favor of God was upon him.
Posted by Jesus Caritas Est at 9:09 AM