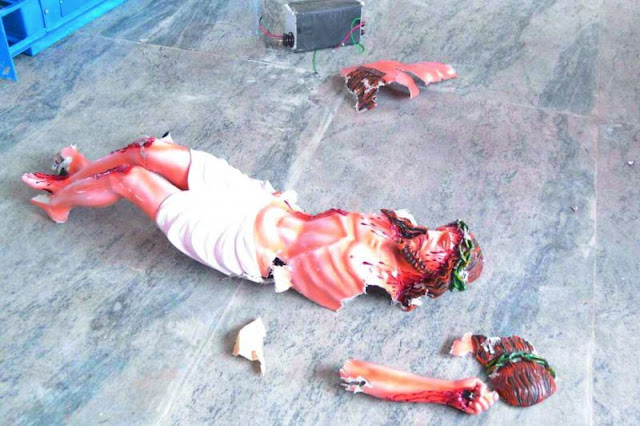 Asia News report: The crowd was composed by 100 attackers. The religious site inaugurated on May 13, on the centenary of the apparitions. The assault dictated by a land dispute. Archbishop Thumma Bala: "Deeply painful".
Hyderabad (AsiaNews) - An angry crowd of about 100 people devastated and vandalized the church of Our Lady of Fatima at Godamakunta, in the village of Keesara (in the diocese of Hyderabad). The assailants destroyed the crucifix and broken the statue of the Virgin.

The latest episode of intolerance towards the Christian minority occurred yesterday at around 9.30am (local time). The church was consecrated on May 13 by Archbishop Thumma Bala, on the day when the Universal Church celebrated the centenary of Fatima's apparitions. Speaking to AsiaNews Msgr. Bala affirms with pain: "This act of desecration, vandalism and the destruction of statues deeply wounds the religious feelings of the Catholic community. We are very upset."
The archbishop reports that the diocese will lead a "reparation service after the police have completed the investigation." Then he regretfully adds that the religious building had been blessed and inaugurated just a week ago.
Sajan K George, president of the Global Council of Indian Christians (Gcic), denounces: "The Church has been vandalized and destroyed by anti-social elements, most likely belonging to groups of nationalist extremists." "The Gcic - he continues - is outraged by the sacrilegious destruction of about 100 people who tore down the interior of the church and all the decorations."

According to the police, the assault is motivated by a land dispute. M. Surender, village police inspector, reports that the landowner, a man named George Reddy, asked the district administration permission to build a church on a plot of 1000 square yards [about 900 sqm] , but that he still had not obtained approval.
Anantha Chary, sub-inspector, argues that building has hurt the sensitivity of local residents. Yesterday some of them gathered in front of the village's sarpanch (head) residence and from there they left for the raid. "The furious residents claimed that the landlord built the church illegally. We have denounced them for revolt. "
The case was recorded against 10 aggressors based on sections of the Indian Penal Code 448 (Domestic Violation), 427 (damage), 323 (voluntary injuries), 506 (criminal intimidation), 153 (provocation with the criminal code) Intent on causing an uprising). "The growing hostility to the Christian faith - concludes the president of Gcic - and the intolerance towards the Christian faithful is an alarm signal."
Posted by Jesus Caritas Est at 8:37 PM 9 comments: 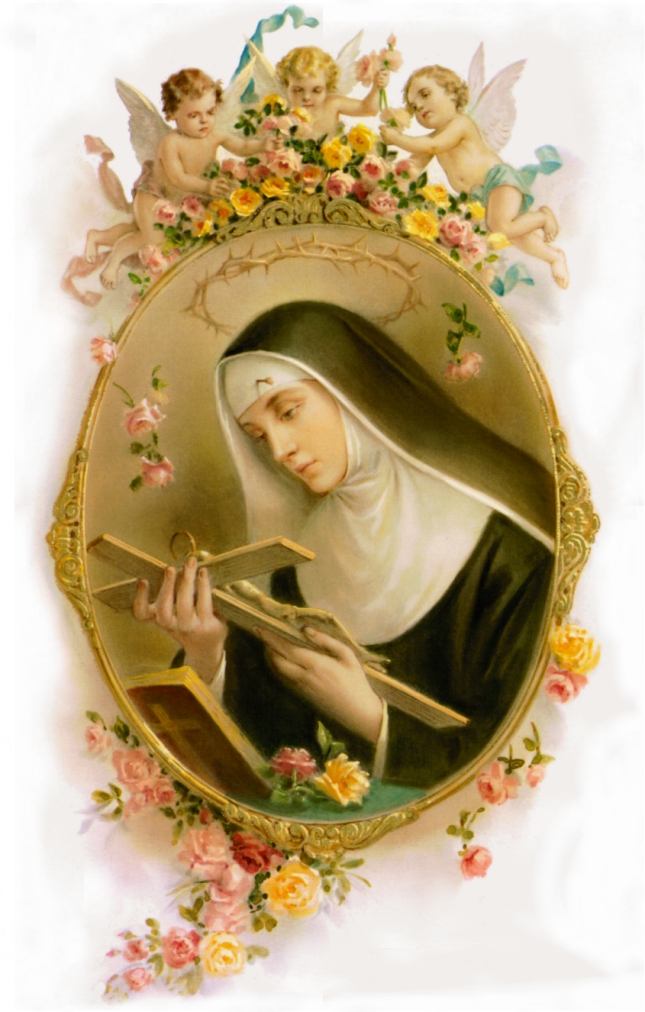 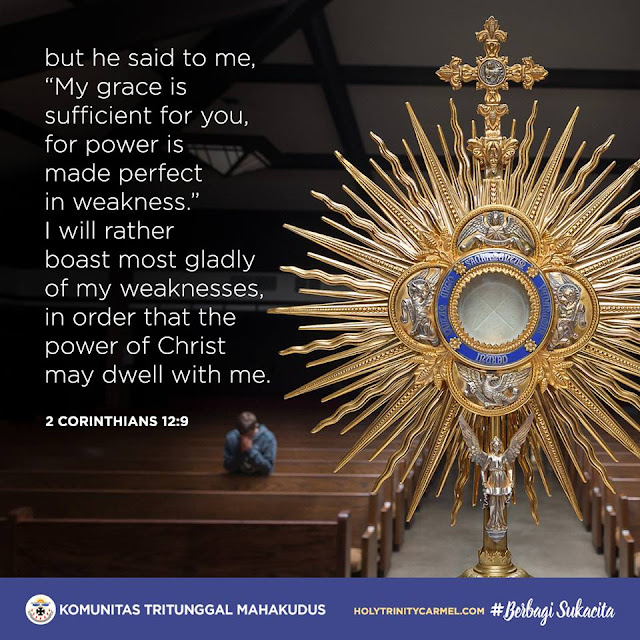 Monday of the Sixth Week of Easter
Lectionary: 291

We set sail from Troas, making a straight run for Samothrace,
and on the next day to Neapolis, and from there to Philippi,
a leading city in that district of Macedonia and a Roman colony.
We spent some time in that city.
On the sabbath we went outside the city gate along the river
where we thought there would be a place of prayer.
We sat and spoke with the women who had gathered there.
One of them, a woman named Lydia, a dealer in purple cloth,
from the city of Thyatira, a worshiper of God, listened,
and the Lord opened her heart to pay attention
to what Paul was saying.
After she and her household had been baptized,
she offered us an invitation,
"If you consider me a believer in the Lord,
come and stay at my home," and she prevailed on us.

Jesus said to his disciples:
"When the Advocate comes whom I will send you from the Father,
the Spirit of truth who proceeds from the Father,
he will testify to me.
And you also testify,
because you have been with me from the beginning.

"I have told you this so that you may not fall away.
They will expel you from the synagogues;
in fact, the hour is coming when everyone who kills you
will think he is offering worship to God.
They will do this because they have not known either the Father or me.
I have told you this so that when their hour comes
you may remember that I told you."
Posted by Jesus Caritas Est at 1:51 PM No comments:

#PopeFrancis ‘Lord, open my heart so that the Spirit can enter it, and I can understand that Jesus is the Lord.’” Homily 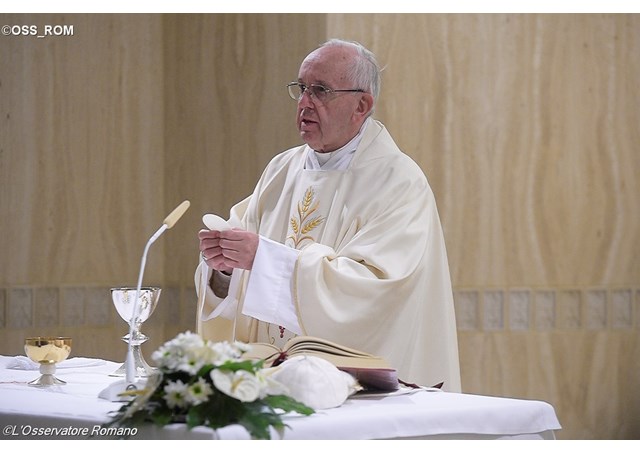 It is only the Holy Spirit Who can teach us to say: “Jesus is the Lord.” That was the focus of Pope Francis’ reflections during the morning Mass at the Casa Santa Marta on Monday. The Holy Father emphasized that we must open our hearts in order to hear the Holy Spirit, and thus be able to bear witness to Christ.
“Be calm, I will not leave you orphans; I will send you an advocate, the Holy Spirit, to defend you before the Father.” Pope Francis based his homily on the long discourse of Jesus to His disciples at the Last Supper. The Pope dwelt especially on the Holy Spirit, the Paraclete, who accompanies us and “gives us the assurance of being saved by Jesus.”
The Holy Spirit, the gift of Jesus, is the travelling companion of the Church
It is only the Holy Spirit, the Pope said, Who teaches us to say, “Jesus is the Lord”:
“Without the Holy Spirit, none of us is able to say it, to perceive it, to live it. Jesus, in other places in this long discourse, said of Him [the Holy Spirit]: ‘He will lead you into all truth,’ He will accompany you towards the full truth. ‘He will bring to your remembrance all that I have said to you; He will teach you all things.’ That is, the Holy Spirit is the travelling companion of every Christian, and also the travelling companion of the Church. And this is the gift that Jesus gives us.”
We must open our hearts to the Holy Spirit; otherwise, He cannot enter in
The Holy Spirit, he continued, is “a gift, the great gift of Jesus,” Who does not lead us astray. But where does the Spirit dwell? the Pope asked. He looked to the first reading, from the Acts of the Apostles, where we see the figure of Lydia, a dealer in purple cloth, someone who “knew how to do things.” The Lord opened her heart, so that she might follow the Word of God:
“The Lord opened her heart so that the Holy Spirit could enter, and she became a disciple. It is precisely within our hearts that we carry the Holy Spirit. The Church calls the Spirit ‘the sweet guest of the heart’: He is there. But He cannot enter a closed heart. ‘Ah, but where can one buy the keys to open the heart?’ No! That too is a gift. It is a gift of God: ‘Lord, open my heart so that the Spirit can enter it, and I can understand that Jesus is the Lord.’”
This, the Pope said, is a prayer that we should say every day: “Lord, open my heart so that I can understand what You have taught us; so that I can remember Your words; so that I can follow Your words; so that I can come to the fullness of the truth.”
Let us ask ourselves if our hearts are truly open to the Spirit
Our hearts must be open, then, so that the Holy Spirit can enter, and so that we can hear the Spirit. Pope Francis said the readings of the Mass suggest two questions we can ask ourselves:
“The first: Do I ask the Lord for the grace that my heart might be opened? The second question: Do I seek to hear the Holy Spirit, His inspirations, the things He tells my heart that I might advance in the Christian life, and that I too might bear witness that Jesus is the Lord? Think about these two things today: Is my heart open? Do I make an effort to listen to the Holy Spirit, to what He tells me? And so we advance in the Christian life, and we too bear witness to Jesus Christ.”

Posted by Jesus Caritas Est at 1:27 PM No comments: 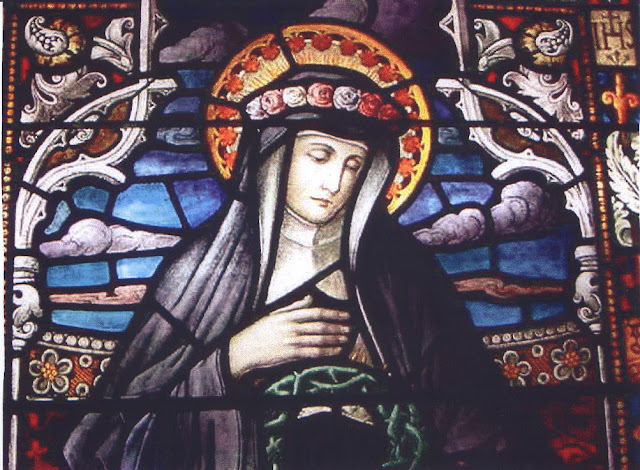