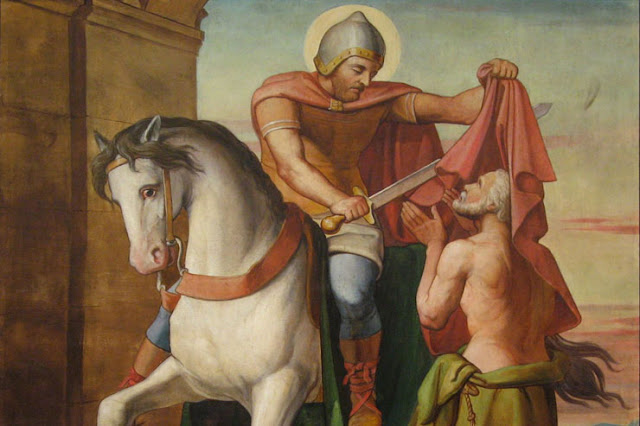 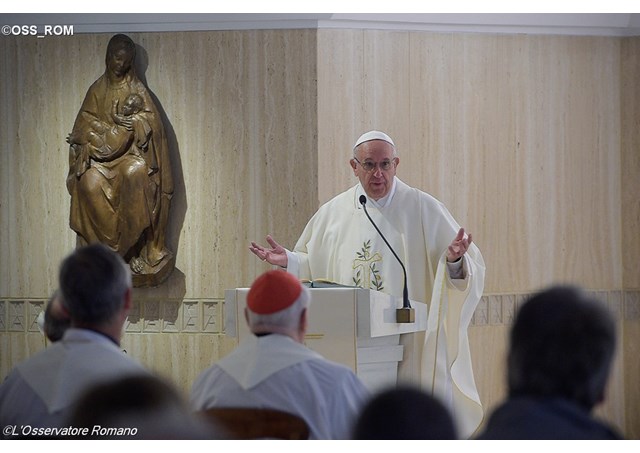 Pope Francis on Friday once more hit out against the powerful networks of corruption, reminding those involved they are dealing with the goods of others, not theirs.   Delivering a homily during his Mass at the Casa Santa Marta residence in the Vatican, the Pope commented on the Gospel of Luke where Jesus recounts the parable of the dishonest steward who later strikes deals with his master’s debtors.

Describing the dealing as “a true ring of corruption” the Pope said this true even in our days.   “Those involved in these corruption rings are so powerful they are like the mafia.”   This, the Pope said, is fact and not a fairy tale or something from ancient history.  We find them daily in newspapers, especially those who administer public goods, which is not theirs.  There is no question about corruption with one’s own goods because they are always defended.
The Holy Father said that the lesson that Jesus wishes to draw from the parable is the greater craftiness of the “children of this world” compared to the children of light.  Their greater corruption and cunning is carried forward in “style” and “silk gloves”.
“Christian craftiness”
‎The Pope pointed out that there are many among Christians who are corrupt. If they are more crafty than those faithful to Jesus, the Pope wondered whether there exists something like “Christian craftiness”, something for those who want to follow Jesus without ending up badly.  What is this “Christian craftiness” that is not sin but helps me to go ahead in the service of the Lord, including with the help of others, the Pope asked.
Three attitudes
If there is a Gospel path and “Christian ‘track’ to follow without falling into the ring of corruption”, the Pope said, Jesus points it out with some contrasts, such as when he speaks about Christians as “lambs among wolves” or “prudent as serpents and simple as doves.”   In this regard the Pope pointed to 3 attitudes of Christian craftiness.   The first is a “healthy mistrust”, which means to be careful of someone who “promises too much” and “talks much” like those who ask you to invest in his bank for a “double interest”.   The second attitude is reflection when faced with the seductions of the devil who knows our weaknesses; and lastly, prayer.
Pope Francis invited the faithful to pray to the Lord to grant them this grace to be cunning Christians, to have this Christian craftiness and Christian “track”.   If there is one thing that a Christian cannot allow himself, it is being naive.  The Pope said that Christians have a treasure within -  the Holy Spirit – which we have to safeguard; and being naive would rob one of the Spirit.
Speaking about what he described as the “smog of corruption” that pollutes society, the Holy Father also urged for prayers for the corrupt so that they “find a way out of the prison in which they wanted to enter.”
Posted by Jesus Caritas Est at 10:01 PM No comments: 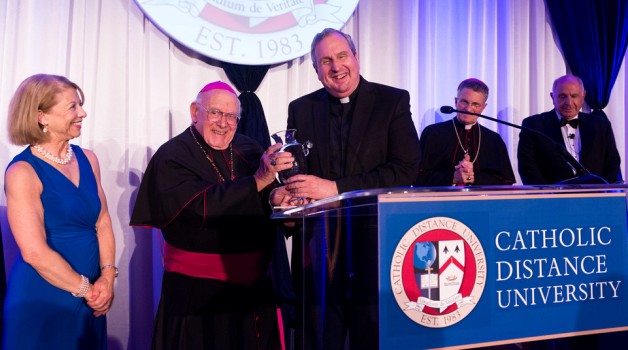 Catholic Distance University, located in Virginia, USA presented its Founders Award to Jesuit Father Robert J. Spitzer. He is the president of the Magis Center for Science, Reason and Faith. This occurred at its annual gala at the Westin Arlington Gateway Hotel Nov. 4. Father Spitzer, who served as Gonzaga University president from 1998 to 2009, is president of the Spitzer Center for Visionary Leadership. He is the author of 10 books, he hosts a weekly show, “Father Spitzer’s Universe,” on EWTN. He said he is looking forward to a partnership between CDU and the Magis Center. “CDU is going to be a very instrumental part” of our work, he said. In his remarks, he talked about the reasons why people leave the church. He said there is a misconception that one reason is because faith and science are contradictory. “We have truth on our side,” he said. “Faith and science are in no way contradictory.” The Bishop Thomas J. Welsh Parish Award went to both St. Veronica Church in Chantilly and St. James the Greater Church in Charles Town, W.Va. CDU moved its headquarters to the Diocese of Wheeling-Charleston, W.Va., in 2015 after being in the Arlington Diocese for more than 30 years. Father Dennis W. Kleinmann, pastor of St. Veronica Church, accepted the award from Susan Malone, gala chairwoman. Arlington Bishop Michael F. Burbidge offered opening remarks, and Bishop Emeritus Paul S. Loverde introduced the Founders Award and presented it to Father Spitzer with Marianne Evans Mount, CDU founder and president; Archbishop Timothy P. Broglio of the Military Archdiocese; and Dr. Charles R. Wasaff, chairman of the CDU board. (Edited from the Arlington Catholic Herald - Photo CDU Website)
Posted by Jesus Caritas Est at 9:53 PM 1 comment: 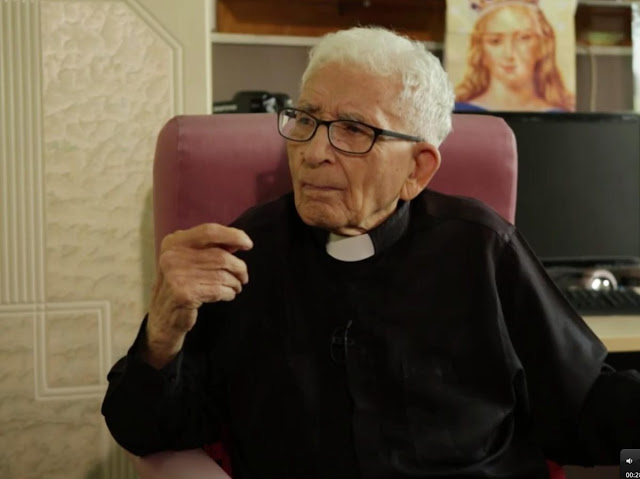 Fr. Gaetano Nicosia, the angel of the lepers, has died

ASIA NEWS REPORT: The Salesian priest died on November 6 in Hong Kong at 102 years of age. He lived for 48 years in a village of Coloane with a hundred lepers. He offered them care, dignity and Christian faith. A friend of Fr. Allegra and other missionaries, he inspired commitment to leprosy treatment in China. A life given to the Lord for the poor.
Posted by Jesus Caritas Est at 9:27 PM No comments:

#PopeFrancis "May their prophetic voice serve as a warning, above all for coming generations!" against Nuclear Weapons FULL TEXT + Video 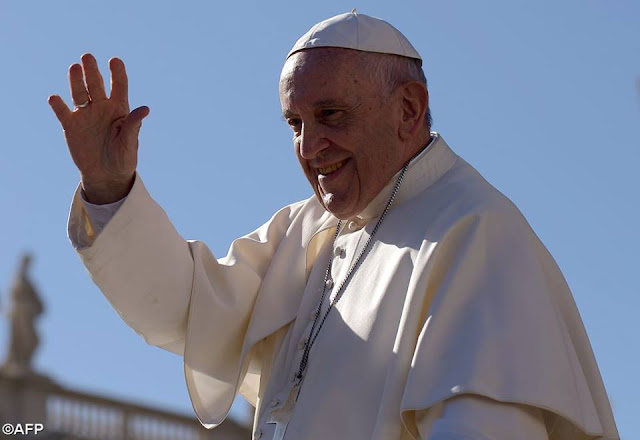 Dear Friends,
I offer a cordial welcome to each of you and I express my deep gratitude for your presence here and your work in the service of the common good. I thank Cardinal Turkson for his greeting and introduction.
In this Symposium, you have met to discuss issues that are critical both in themselves and in the light of the complex political challenges of the current international scene, marked as it is by a climate of instability and conflict. A certain pessimism might make us think that “prospects for a world free from nuclear arms and for integral disarmament”, the theme of your meeting, appear increasingly remote. Indeed, the escalation of the arms race continues unabated and the price of modernizing and developing weaponry, not only nuclear weapons, represents a considerable expense for nations. As a result, the real priorities facing our human family, such as the fight against poverty, the promotion of peace, the undertaking of educational, ecological and healthcare projects, and the development of human rights, are relegated to second place (cf. Message to the Conference on the Humanitarian Impact of Nuclear Weapons, 7 December 2014).


Nor can we fail to be genuinely concerned by the catastrophic humanitarian and environmental effects of any employment of nuclear devices. If we also take into account the risk of an accidental detonation as a result of error of any kind, the threat of their use, as well as their very possession, is to be firmly condemned. For they exist in the service of a mentality of fear that affects not only the parties in conflict but the entire human race. International relations cannot be held captive to military force, mutual intimidation, and the parading of stockpiles of arms. Weapons of mass destruction, particularly nuclear weapons, create nothing but a false sense of security. They cannot constitute the basis for peaceful coexistence between members of the human family, which must rather be inspired by an ethics of solidarity (cf. Message to the United Nations Conference to Negotiate a Legally Binding Instrument to Prohibit Nuclear Weapons, 27 March 2017). Essential in this regard is the witness given by the Hibakusha, the survivors of the bombing of Hiroshima and Nagasaki, together with other victims of nuclear arms testing. May their prophetic voice serve as a warning, above all for coming generations!
Furthermore, weapons that result in the destruction of the human race are senseless even from a tactical standpoint. For that matter, while true science is always at the service of humanity, in our time we are increasingly troubled by the misuse of certain projects originally conceived for a good cause. Suffice it to note that nuclear technologies are now spreading, also through digital communications, and that the instruments of international law have not prevented new states from joining those already in possession of nuclear weapons. The resulting scenarios are deeply disturbing if we consider the challenges of contemporary geopolitics, like terrorism or asymmetric warfare.
At the same time, a healthy realism continues to shine a light of hope on our unruly world. Recently, for example, in a historic vote at the United Nations, the majority of the members of the international community determined that nuclear weapons are not only immoral, but must also be considered an illegal means of warfare. This decision filled a significant juridical lacuna, inasmuch as chemical weapons, biological weapons, anti-human mines and cluster bombs are all expressly prohibited by international conventions. Even more important is the fact that it was mainly the result of a “humanitarian initiative” sponsored by a significant alliance between civil society, states, international organizations, churches, academies and groups of experts. The document that you, distinguished recipients of the Nobel Prize, have consigned to me is a part of this, and I express my gratitude and appreciation for it.
This year marks the fiftieth anniversary of the Encyclical Letter Populorum Progressio of Pope Paul VI. That Encyclical, in developing the Christian concept of the person, set forth the notion of integral human development and proposed it as “the new name of peace”. In this memorable and still timely document, the Pope stated succinctly that “development cannot be restricted to economic growth alone. To be authentic, it must be integral; it must foster the development of each man and of the whole man” (No. 14).
We need, then, to reject the culture of waste and to care for individuals and peoples labouring under painful disparities through patient efforts to favour processes of solidarity over selfish and contingent interests. This also entails integrating the individual and the social dimensions through the application of the principle of subsidiarity, encouraging the contribution of all, as individuals and as groups. Lastly, there is a need to promote human beings in the indissoluble unity of soul and body, of contemplation and action.
In this way, progress that is both effective and inclusive can achieve the utopia of a world free of deadly instruments of aggression, contrary to the criticism of those who consider idealistic any process of dismantling arsenals. The teaching of John XXIII remains ever valid. In pointing to the goal of an integral disarmament, he stated: “Unless this process of disarmament be thoroughgoing and complete, and reach men’s very souls, it is impossible to stop the arms race, or to reduce armaments, or – and this is the main thing – ultimately to abolish them entirely” (Pacem in Terris, 11 April 1963).
The Church does not tire of offering the world this wisdom and the actions it inspires, conscious that integral development is the beneficial path that the human family is called to travel. I encourage you to carry forward this activity with patience and constancy, in the trust that the Lord is ever at our side. May he bless each of you and your efforts in the service of justice and peace.
Posted by Jesus Caritas Est at 3:03 PM No comments:

Archbishop Chaput explains Amoris Laetitia "we need to engage the text with open hearts and the discipline of clear thinking." 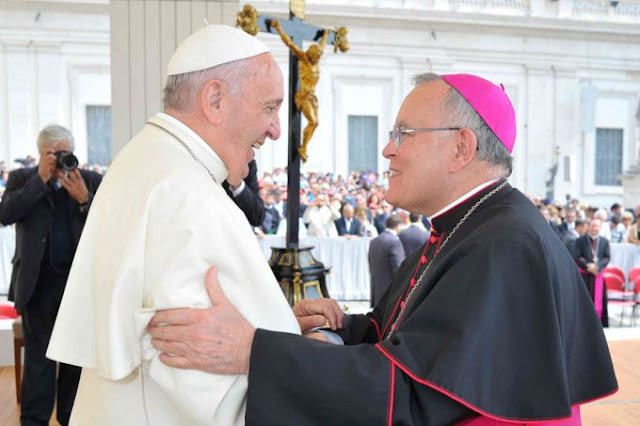