Pope Francis at Mass with Melkite Patriarch “confirms our Apostolic Communion: He is the father of a very ancient Church... and to say ‘I am in communion with Peter.’” 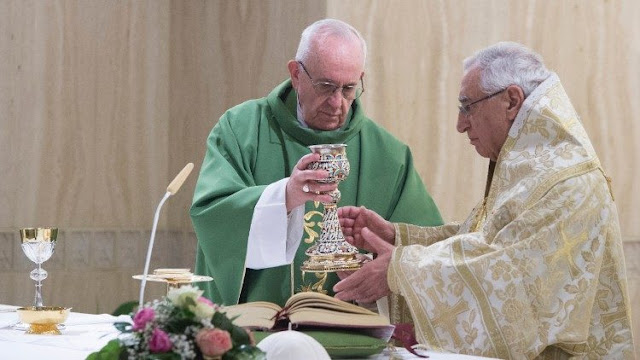 Vatican News Report: By Devin Watkins
Pope Francis concelebrated Mass on Tuesday morning with the Melkite Greek Catholic Patriarch of Antioch, Youssef Absi.
Instead of delivering a homily, Pope Francis said a few words about the meaning of the day’s celebration, at which members of the Melkite Greek Synod participated.
“This Mass with our brother, Patriarch Youssef,” the Pope said, “confirms our Apostolic Communion: He is the father of a very ancient Church, and he comes to embrace Peter and to say ‘I am in communion with Peter.’” The Holy Father said this was the meaning of the Eucharistic celebration.

He said the Melkite Greek Church is “a rich Church with its own theology within Catholic theology and with its own marvelous liturgy”.
The Pope said “at this moment a large part of the [Melkite] people is crucified, like Jesus.”
He said the Mass was being celebrated for the people of the Melkite Greek Church, “for the people who suffer, and for persecuted Christians in the Middle East, who give up their lives, goods, and property because they are driven out.” Pope Francis said he also offered the Mass for the ministry of “our brother Youssef”.

Following the Mass, Patriarch Youssef thanked the Pope for “this beautiful Mass of communion”. He said, “Personally, I am truly moved by your fraternal charity and the solidarity you have shown to our Church.”
Patriarch Youssef promised to keep Pope Francis in his heart and prayers. “I cannot describe the beauty,” the Patriarch said, of “this communion, which unites all the disciples of Christ.”
Posted by Jesus Caritas Est at 9:38 AM