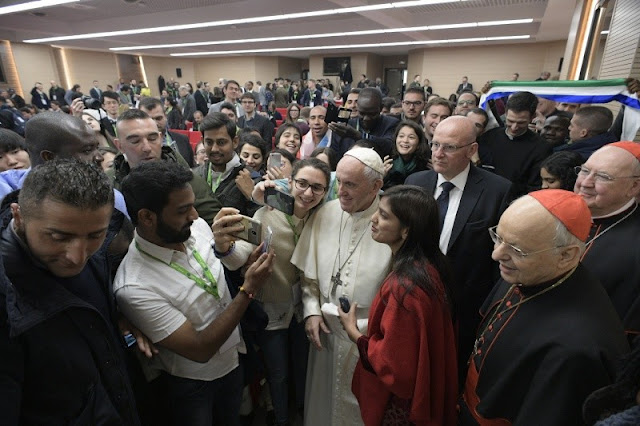 How can young people help victims of human trafficking?
Pope Francis was clearly moved by the first question which addressed the reality of sex trafficking. He referred to the stories he has heard from trafficked women about the dangers they face trying to escape their captors. The Pope described this abuse, and even torture, as the “slavery of today”. The Pope went on to denounce the evil of exploiting women. He had especially strong words for baptized Catholics who pay for prostitutes. This is a “crime against humanity”, he said. Pope Francis called on young people to fight for the dignity of women, and concluded by asking forgiveness for all the Catholics who take part in these “criminal acts”.
Where should a young person look for guidance in making life choices?
Pope Francis responded to a young French student seeking direction in his life, by suggesting we confide in those who possess wisdom, regardless of whether they are young or old. “The wise person”, he said, “is the one who is not scared of anything, but who knows how to listen and has the God-given gift of saying the right thing at the right time”. The Pope warned that when young people fail to find their “path of discernment”, they risk shutting themselves off. This can become like carrying a “cancer” inside, he said. And this risks weighing them down and taking away their freedom.
How can we teach young people to be open to their neighbor and to the transcendent?
Pope Francis said education should teach three basic languages: those of the head, the heart, and the hands. The language of the head, he said, means thinking well and learning concrete things. That of the heart means understanding feelings and sentiments. The language of the hands is making use of the gifts God has given us to create new things. The key, he said, is to use all three together. Pope Francis went on to criticize what he called the “isolating nature” of today’s digital, virtual world. Rather than demonize technology, the Pope called it a richness that must be used well with a “concreteness that brings freedom”.
How is a young person preparing for the priesthood to respond to the complexities of present-day culture – like tattoos, for instance?
Pope Francis used this question from a young Ukrainian seminarian to reflect on the priest as a “witness to Christ”. Clericalism, on the contrary, said the Pope, is “one of the worst illnesses of the Church”, because it confuses the “paternal role of the priest” with the “managerial role of the boss”. He also spoke about the relationship between the priest and the community and how this relationship is compromised, and can be destroyed, by “gossip”. Responding specifically to the question of tattoos, Pope Francis recalled how different cultures have used them to distinguish and identify themselves, so “don’t be afraid of tattoos”, he said – but don’t exaggerate either. If anything, use the tattoo as a talking-point to begin a dialogue about what it signifies.
How can young women religious balance the dominant culture in society and the spiritual life in accomplishing their mission?
The Pope responded to this final question saying that an adequate formation throughout religious life needs to be built on four pillars: formation for an intellectual, communitarian, apostolic, and spiritual life. Having only a spiritual formation leads to psychological immaturity, he said. Even though this is often done to protect young religious from the world, Pope Francis said it is not protection, it is “deformation”. Those who have not received affective formation are the ones who have ended up doing evil. Allowing people to mature affectively is the only way to protect them.
Text Source: Vatican News.va
Posted by Jesus Caritas Est at 1:09 PM