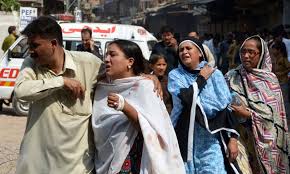 Quetta (Agenzia Fides) - Unidentified gunmen riding a motorcycle entered the Christian area of Essa Nagri, in the city of Quetta, capital of Beluchistan, yesterday evening, April 15th and opened fire on Christian worshippers: 2 were killed and five were injured. Of the two victims, one Catholic, the other Protestant, one man died on the spot and another died in hospital in Bolan in Quetta, where the other injured are being treated.One eyewitness told Fides: "I saw four men with their faces covered on a motorcycle, one of them was holding a gun, another a rifle, they opened fire and fled. In that precise moment there were no liturgies or masses in the church, which is 50 meters away. The goal was to indiscriminately hit the Christian community who live there".The police have started formal investigations on the case. So far none of the terrorist militant groups have claimed responsibility for this attack. The funeral of the dead will be held in Quetta this evening, 16 April.The attack has shocked the population. After the attack, over 500 Christians protested, cried and prayed in the streets. The Christians of Quetta demand justice and protection for Christians in Quetta. The protesters also chanted slogans against the government of Belucistan accusing it of not having ensured the safety of religious minorities in Pakistan.The president of the Pakistani People's Party Bilawal Zardari condemned the attack and expressed solidarity towards the victims and said: "Terrorists are attacking Christians in Pakistan to blur the image of the country". I demand severe action against the terrorists involved in this attack". In messages sent to Fides, Asiya Nasir and Khalil George, Pakistan's Christian parliamentarians, strongly condemned the attack and called for action against the terrorists.Even in Karachi, capital of the province of Sindh, Christians organized a peaceful demonstration to show their solidarity and support for Christians in Quetta. Christian Adeel Patras Chaudry, in charge of "Jesus Life TV" in Pakistan, told Fides: "We ask the institutions and the judiciary to seriously address the issue of the protection of minorities in Pakistan. So far the government has failed".The attack came nearly two weeks after four Catholics who had been visiting a relative as part of an Easter reunion were killed in Quetta's Shah Zaman area. A week before last Christmas, two suicide bombers packed a Christian church in Quetta, killing at least 14 people and wounding up to 56. (AG) (Agenzia Fides, 16/4/2018)

FULL TEXT Release from Agenzia Fides
Posted by Jesus Caritas Est at 11:41 AM