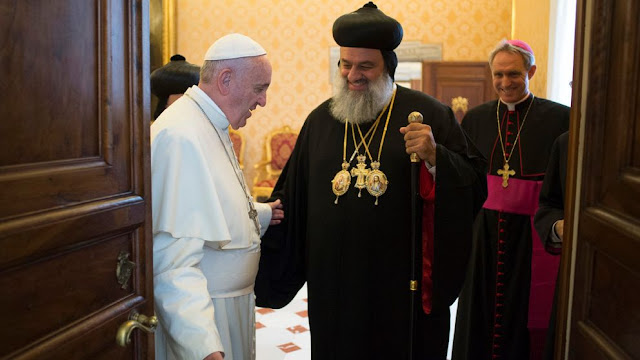 The Patriarchates of the East and the Evangelical Synod of Syria and Lebanon have both issued statements condemning bombing of Syria by the USA and allied forces of Britain and France. This bombing was in response to a chemical weapons attack. A statement signed by John X, the Greek Orthodox Patriach of Antioch and all the East, Ignatius Aphrem II, Syrian Orthodox Patriach of Antioch and all the East, and Joseph Absi, Melike-Greek Catholic Patriarch of Antioch, Alexandria and Jerusalem explains that they 'condemn and denounce the brutal aggression'. A similar statement has been issued by the National Evangelical Synod in Syria and Lebanon. It says the strike was the result of 'the fabrication of charges, without legal justification' and was 'in contradiction to the desire of the Syrian people'.
Please Read Below the FULL TEXT Statements by these Christian Leaders


Damascus, 14 April 2018
God is with us; Understand all ye nations and submit yourselves!

We, the Patriarchs: John X, Greek Orthodox Patriarch of Antioch and all the East, Ignatius Aphrem II, Syrian Orthodox Patriarch of Antioch and all the East, and Joseph Absi, Melkite-Greek Catholic Patriarch of Antioch, Alexandria, and Jerusalem, condemn and denounce the brutal aggression that took place this morning against our precious country Syria by the USA, France and the UK, under the allegations that the Syrian government has used chemical weapons. We raise our voices to affirm the following:
We offer our prayers for the safety, victory, and deliverance of Syria from all kinds of wars and terrorism. We also pray for peace in Syria and throughout the world, and call for strengthening the efforts of the national reconciliation for the sake of protecting the country and preserving the dignity of all Syrians.
Source: https://www.antiochpatriarchate.org/en/page/a-statement-issued-by-the-patriarchates-of-antioch-and-all-the-east-for-the-greek-orthodox-syrian-orthodox-and-greek-melkite-catholic-damascus-14-april-2018/1918/ 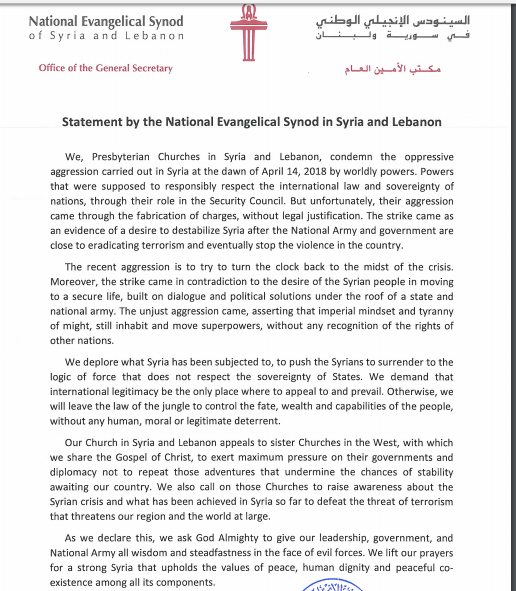