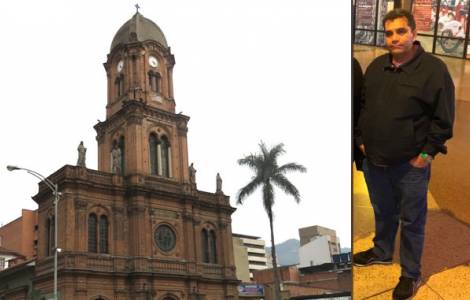 Medellin (Agenzia Fides) – On Wednesday 25, Fr. John Fredy Garcia Jaramillo, 50, was found dead in his home in the neighborhood of Bethlehem Los Almendros, in the south-west part of Medellin. According to the news sent to Agenzia Fides the police believe that his death is the result of a robbery attempt.

"So far what they have said is that it was a robbery", a relative of the priest said, "because they ransacked the apartment and the safe was open".Fr. García Jaramillo belonged to the diocese of Apartadó, but worked as a teacher at the "San Ignacio de Loyola" school in Medellín. The priest was known for his social work in the community, where he was carrying out several social projects in the banana region. For the moment, no other details of the murder are known, but there is evidence that violence in the area has increased considerably, bus drivers were killed for robbery last week. (CE) (Full Text Release from Agenzia Fides, 27/07/2018
)
Posted by Jesus Caritas Est at 1:13 PM