Pope Francis on Flight to Rome “I have found so much faith in Ireland,” Press Conference 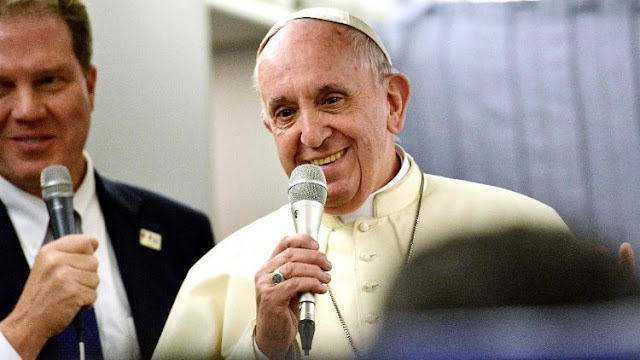 Pope Francis: I found so much faith in Ireland!
Pope Francis shares his thoughts about his Apostolic Journey as he speaks with reporters during the flight back to Rome on Sunday evening.
By Vatican News
“I have found so much faith in Ireland,” Pope Francis said at the end of his two-day visit to the land of Saints and Scholars. “The Irish have suffered so much from the scandals, but they know how to distinguish the truth from half-truths,” he said, reciting the words spoken to him by an unnamed Bishop a few hours earlier. And even if the healing process is ongoing, the faith of the Irish people remains solid.

Although the Pope had gone to Ireland to celebrate the World Meeting of Families, the subject of abuse cast a pallor over his visit. In particular, reporters were waiting to hear Pope Francis response to allegations made by a former Apostolic Nuncio (papal ambassador) to the United States. In a document published overnight Saturday, Archbishop Carlo Maria Viganò questioned the Holy Father’s response to accusations against Archbishop Theodore McCarrick, forced to resign his cardinalate over “credible” and “substantiated” allegations of sexual abuse of a minor. Further accusations against McCarrick have subsequently been made known.
Pope Francis was spoke bluntly about Archbishop Viganò’s charges: “I say this sincerely: Read it attentively and make your own judgment. I will not say a word about this. I believe the document speaks for itself.”
Judging Bishops case by case
Instead, the Pope spoke on a number of other delicate and complex topics, including how to try a Bishop accused of abuse. Gently rejecting the wish of Marie Collins – a former member of the Pontifical Commission for the Protection of Minors – the Pope said that a standing court such as the one called for in the motu proprio“Come una madre amorevole” is not the best option. Rather, Bishops might be tried by an ad hoc tribunal on a case by case basis. “It functions better that way,” the Pope affirmed, noting the trial of the Archbishop of Guam had been handled in this manner. He also indicated another trial was proceeding along the same lines.
Speak out immediately!
Asked about how the “People of God” can and should respond to evils perpetrated by priests, Pope Francis urged families to believe their children. “When you see something,” he said, “you must speak out immediately.
On the other hand, he also criticized irresponsible media outlets for judging people before the facts can be ascertained. He called to mind a case in Granada where a group of priests had been accused of pedophilia by a student who had written to the Pope. The humiliation the priests suffered proved to be a cruel injustice, because they were later found to be innocent. The Holy Father admitted that the work of journalists is delicate—they must say something, but, he insisted, “always with the presumption of innocence and not with the presumption of guilt."
“Pray, and don’t condemn”
Pope Francis had high praise for the Irish minister who spoke about the tragic case of orphanages run by Irish nuns in Tuam—the subject of an investigation by the authorities into abuses that occurred over many decades. The Holy Father urged caution, until the investigation could be completed, and the responsibility of the Church could be determined. Whatever the outcome of the inquiry, the Pope expressed his appreciation for the fairness and the “dignity” with which the government’s representative briefed him on the matter. Another journalist asked asked Pope Francis what advice he would give to a father whose child revealed that he or she was homosexual. The Holy Father said he would encourage a parent “to pray, to not condemn, to dialogue, to make room” for their son or daughter—because to ignore them or cast them aside would mean something was missing from their parenthood.
Text Shared from Vatican News
Posted by Jesus Caritas Est at 10:18 PM