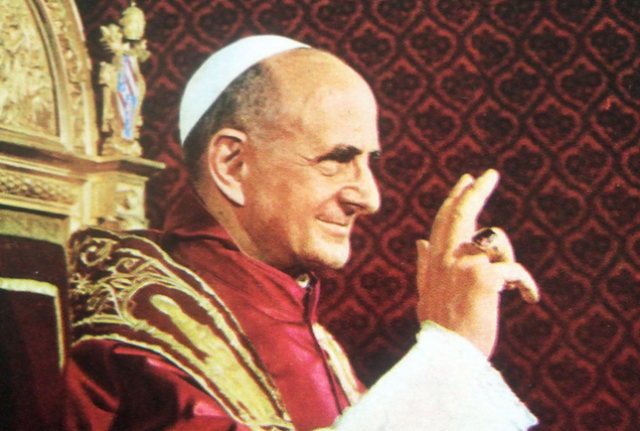 Blessed Pope Paul VI died on August 6, 1978. He will be declared a saint on October 14, 2018.  Pope Paul VI had a 15-year pontificate. His original name was Giovanni Battista Montini. Giovanni was born on September 26, 1897, in Concesio, near Brescia, Italy and died August 6, 1978, in Castel Gandolfo. He was beatified on October 19, 2014; and his feast day is September 26. He was an Italian pope of the Roman Catholic church and reigned from 1963–78. This period included most of the second Vatican Council (1962–65) and the immediate postconciliar era. He issued directives and guidance to a changing Roman Catholic church post-Vatican Council II. He is famous for his pro-life  encyclical “Humanae Vitae”, which, affirmed the intimate union between conjugal love and openness to life. Both the miracles attributed to the intercession of Paul VI are regarding foetuses, i.e. unborn life. The miracle considered for Paul VI’s canonization was regarding a woman from Verona whose unborn child was in danger of being born dead or heavily deformed. The gynecologist suggested to the family to pray to Paul VI and then the girl was born on Christmas day that year in complete health.
He was the son of a middle-class lawyer—who was also a journalist and local political figure—and of a mother belonging to the same social background, Montini was in his early years educated mainly at home because of frail health. Later he studied in Brescia. Ordained priest on May 29, 1920, he was sent by his bishop to Rome for higher studies and was eventually recruited for the Vatican diplomatic service. His first assignment, in May 1923, was to the staff of the apostolic nunciature (papal ambassador’s post) in Warsaw, but persistent ill health brought him back to Rome before the end of that same year. He then pursued special studies at the Ecclesiastical Academy, the training school for future Vatican diplomats, and at the same time resumed work at the Vatican Secretariat of State, where he remained in posts of increasing importance for more than 30 years. In 1939 Montini was appointed papal undersecretary of state and later, in 1944, acting secretary for ordinary (or nondiplomatic) affairs. He declined an invitation to be elevated to the Sacred College of Cardinals in 1953. In the beginning of November 1954, Pope Pius XII appointed him archbishop of Milan, and Pope John XXIII named him cardinal in 1958. He was elected pope on June 21, 1963, choosing to be known as Paul VI. (Edited from Encyclopedia Britannica and Vatican News)
Below please find the FULL list of Pope Paul VI Encyclicals and Apostolic Exhortations from the Vatican Web Site: