Bishop Accused of Rape in Kerala, India - gives temp. Resignation to Pope and is Interrogated by Police 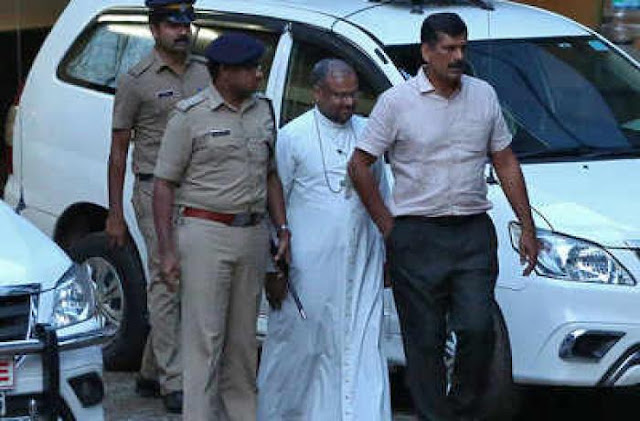 Pope Francis accepts temporary resignation of bishop accused of rape
Mgr Franco Mulakkal requested he be relieved of his duties. The pontiff appointed Mgr Agnelo Rufino Gracias as apostolic administrator. Yesterday the bishop was interrogated for seven hours by Kerala police.
New Delhi (AsiaNews) - Pope Francis "has received the request of Bishop Franco Mulakkal to be temporarily relieved of his responsibilities in the Diocese of Jalandhar,” says a press release by the Catholic Bishops' Conference of India (CBCI). The decision stems from rape allegations made by a nun from the Missionaries of Jesus against the prelate. The accusations against the bishop of Jalandar, Punjab, were first made in July, but the story has become front-page news in recent weeks as a result of an ongoing hunger strike by some Sisters in Kerala, where the case was filed.
In her complaint, the nun said that in 2014 the bishop raped her in a Church-owned hostel in Kuravilangad, Kerala. She told police she was sexually assaulted 13 times over the following two years. The case has sent shockwaves across the whole Indian Church. Recent rumors have it that the bishop would resign and that he might be sent away.
In reality, Mgr Mulakkal asked Pope Francis to temporarily relieve him of his duties so that he can better defend himself against the accusation of rape, which he has flatly denied. Questioned by Kerala police for about seven hours, Mgr Mulakkal stood his ground, denying any involvement, arguing instead that the nun is acting out of revenge. The bishop claims that he had threatened to have the nun investigated after he found her involved with a married man.
Kottayam police superintendent Harishankar, who is in charge of the investigation, said that no one is putting pressure to get the bishop arrested and that investigators are doing their job.
In its statement, the CBCI says: “Having considered all circumstances the Holy Father has accepted this request of Bishop Mulakkal and has appointed Bishop Agnelo Rufino Gracias, Auxiliary Bishop Emeritus of the Archdiocese of Bombay as Apostolic Administrator of the Diocese of Jullander, sede plena et ad mutum Sanctae Sedis with immediate effect. For its part, the Diocese of Bombay is gathered in prayer hoping that the bishop will not be arrested.
SOURCE: Full Text AsiaNews IT
Posted by Jesus Caritas Est at 10:55 AM