#BreakingNews Death Toll in Cebu, Philippines due to Landslide at 55 Killed with Missing - Please Pray 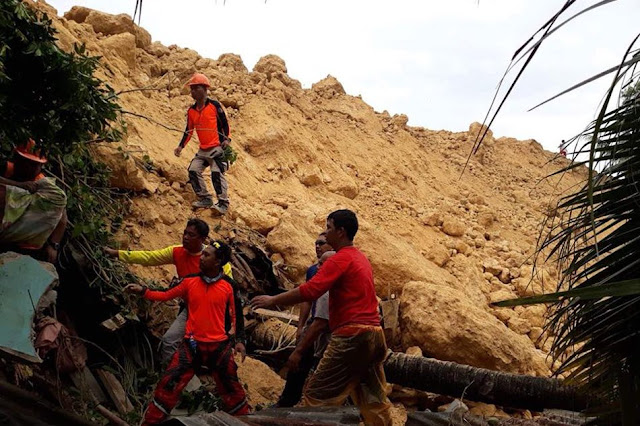 In Naga City, Cebu a landslide has caused the death of 55 people. Dozens remain missing, and classes are suspended in schools that are being used as evacuation centers.  Several water sources were found contaminated with E.coli bacteria. A massive landslide buried dozens of homes near a central Philippine mountain on Thursday. The landslide was triggered by Typhoon Mangkhut. Families of victims are calling it a man-made disaster triggered by the quarry.
Kristine Vanessa Chiong, mayor of Naga city, which has a population of over 100,000, said by telephone that at least 64 people remained missing. "We're really hoping we can still recover them alive." The landslide hit while several northern Philippine provinces were still dealing with deaths and widespread damage wrought by Typhoon Mangkhut, which left at least 88 people dead and more than 60 missing.  Rescuers are at work however it was explained that, "We're running out of time. The ground in the area is still vibrating. We're striking a balance between intensifying our rescue efforts and ensuring the safety of our rescuers," Naga city Coun. Carmelino Cruz said by phone.  4 million Filipinos in the direct path of Typhoon Mangkhut
Posted by Jesus Caritas Est at 10:17 AM