Pope Francis against Racism " On the day of the universal judgment, the Lord will remind us..." FULL TEXT 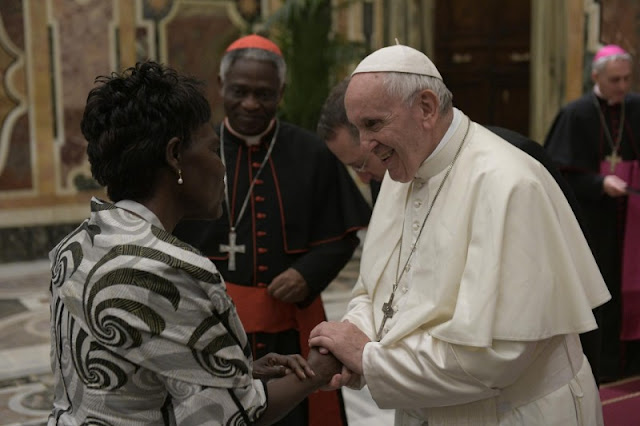 ADDRESS OF THE HOLY FATHER FRANCIS
TO THE PARTICIPANTS IN THE WORLD CONFERENCE ON THE THEME
"XENOPHOBIA, RACISM AND NATIONALIST POPULIST,
IN THE CONTEXT OF WORLD MIGRATIONS "

I wrote a speech to read, but it is a bit 'longish ... This is why I prefer to tell you two or three words from the heart and then greet you one by one: this is very important for me. Please do not be offended.

Mr. Cardinal,
Venerable Brothers in the Episcopate and in the Priesthood,
Dear brothers and sisters,

I am pleased to welcome you on the occasion of the World Conference on the theme of Xenophobia, racism and populist nationalism in the context of world migration (Rome, 18-20 September 2018). I cordially greet the representatives of the institutions of the United Nations, of the Council of Europe, of the Christian Churches, in particular of the Ecumenical Council of Churches, and of other religions. I thank Cardinal Peter Turkson, Prefect of the Department for the Integral Human Development Service, for the kind words he addressed to me on behalf of all the participants.

We live times when life seems to come back and feelings that many seemed to have overcome. Feelings of suspicion, of fear, of contempt and even of hatred towards individuals or groups judged different by reason of their ethnic, national or religious affiliation and, as such, deemed not worthy enough to participate fully in the life of society. These feelings, too often, inspire real acts of intolerance, discrimination or exclusion, which seriously damage the dignity of the people involved and their fundamental rights, including the right to life and to physical and moral integrity. Unfortunately, it also happens that in the world of politics you give in to the temptation to exploit the fears or the objective difficulties of some groups and to use illusory promises for short-sighted electoral interests.

The severity of these phenomena can not leave us indifferent. We are all called, in our respective roles, to cultivate and promote respect for the intrinsic dignity of every human person, starting from the family - place where we learn from the tender age the values ​​of sharing, acceptance, brotherhood and solidarity - but also in the various social contexts in which we operate.

First of all, I think of the formators and the educators, who are asked to renew their commitment so that the respect of every human person is taught in the school, university and other places of formation, despite the physical and cultural differences that distinguish it. prejudices.

In a world in which access to information and communication tools is increasingly widespread, a particular responsibility rests on those who work in the world of social communications, who have the duty to put themselves at the service of truth and to spread information by having care to foster the culture of encounter and openness to the other, in mutual respect for diversity.

Those, then, who derive economic benefit from the climate of distrust in the foreigner, in which the irregularity or illegality of the stay favors and nurtures a system of precariousness and exploitation - sometimes at a level that gives life to real forms of slavery - should make a profound examination of conscience, in the awareness that one day they will have to give an account before God of the choices they have made.

Faced with the spread of new forms of xenophobia and racism, even the leaders of all religions have an important mission: to spread among their faithful the ethical principles and values ​​inscribed by God in the human heart, known as the natural moral law. It is about carrying out and inspiring gestures that contribute to building societies founded on the principle of the sacredness of human life and respect for the dignity of every person, on charity, on brotherhood - which goes far beyond tolerance - and on solidarity.

In particular, may the Christian Churches be humble and industrious witnesses to the love of Christ. In fact, for Christians, the moral responsibilities mentioned above assume an even deeper meaning in the light of faith.

The common origin and the singular bond with the Creator make all the people members of one family, brothers and sisters, created in the image and likeness of God, as the Biblical Revelation teaches.

The dignity of all men, the fundamental unity of the human race and the call to live as brothers, are confirmed and further strengthened to the extent to which the Good News is received that all are equally saved and reunited by Christ, to the point that - as St. Paul says - "there is no Jew or Greek; there is no slave or free; there is no male and female, because all [... we are] one in Christ Jesus "(Gal 3:28).

In this perspective, the other is not only a being to be respected by virtue of his intrinsic dignity, but above all a brother or sister to be loved. In Christ, tolerance is transformed into fraternal love, tenderness and operational solidarity. This is especially true of the smallest of our brothers, among whom we can recognize the stranger, the stranger, with whom Jesus himself identified himself. On the day of the universal judgment, the Lord will remind us: "I was a stranger and you did not receive me" (Mt 25,43). But already today he asks us: "I am a foreigner, do not you recognize me?".

And when Jesus said to the Twelve: "It shall not be so among you" (Mt 20,26), he did not refer only to the dominion of the leaders of nations as regards political power, but to the whole Christian being. Indeed, being a Christian is a call to go against the current, to recognize, welcome and serve Christ himself discarded in the brothers.

Aware of the many expressions of closeness, welcome and integration towards the already existing foreigners, I hope that from the meeting just concluded many other collaborative initiatives may arise, so that we can build together more just and supportive societies.

I entrust each of you and your families to the intercession of Mary Most Holy, Mother of tenderness, and I cordially impart my Apostolic Blessing to you and to all your loved ones.
TEXT-Image Source Share: Vatican.va - Original Text in Italian - Unofficial Translation
Posted by Jesus Caritas Est at 11:40 AM