Pope Francis at Mass "We want to welcome Jesus, in his word, in the Eucharist, in his little ones." FULL TEXT in Lithuania - Official Homily + Video 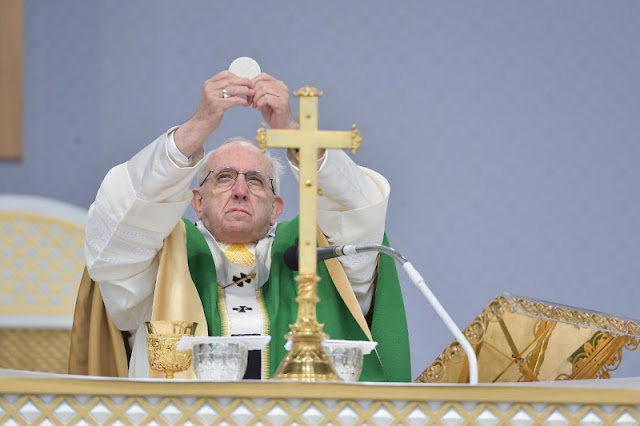 Saint Mark devotes an entire section of his Gospel to the instruction of the Lord’s disciples. It would seem that Jesus, at the halfway point of his journey to Jerusalem, wanted them to renew their choice to follow him, knowing that it would entail moments of trial and grief. The Evangelist describes this period of Jesus’ life by mentioning that on three occasions he announced his passion. All three times, the disciples expressed bewilderment and opposition, and on each of these occasions the Lord wished to leave them a teaching. We have just heard about the second of these three occasions (cf. Mk 9:30-37).
The Christian life always involves experiences of the cross; at times they can seem interminable. Earlier generations still bear the scars of the period of the occupation, anguish at those who were deported, uncertainty about those who never returned, shame for those who were informers and traitors. The Book of Wisdom speaks to us of the just who are persecuted, who suffer insult and punishment solely for their goodness (cf. Wis 2:10-12). How many of you can identify at first hand, or in the history of some family member, with that passage which we just read? How many of you have also felt your faith shaken because God did not appear to take your side? Because the fact of your remaining faithful was not enough for him to intervene in your history? Kaunas knows about this; Lithuania as a whole can testify to it, still shuddering at the mention of Siberia, or the ghettos of Vilnius and Kaunas, among others. You can repeat the words of condemnation uttered by the apostle James in the passage of his Letter that we heard: they covet, they murder, they engage in disputes and conflicts (cf. 4:2).
The disciples did not want Jesus to speak to them of sorrows and the cross; they wanted nothing to do with trials and hardships. Saint Mark tells us that they were interested in other things, that on the way home they discussed who was the greatest among them. Brothers and sisters: the thirst for power and glory is the sign of those who fail to heal the memories of the past and, perhaps for that very reason, to take an active part in the tasks of the present. They would rather discuss who was better, who acted with greater integrity in the past, who has more right to privileges than others. In this way, we deny our own history, “which is glorious precisely because it is a history of sacrifice, of hopes and daily struggles, of lives spent in service and fidelity to work, tiring as it may be” (Evangelii Gaudium, 96). It is a fruitless and vain attitude that refuses to get involved in building the present, since it has lost contact with the struggles of our faithful people. We cannot be like those spiritual “sages” who only judge from afar and chatter constantly about “what ought to be done” (cf. ibid.).
Jesus, knowing what the disciples were discussing, provided them with an antidote to their struggles for power and their rejection of sacrifice. And to make his teaching all the more solemn, he sat down, as a teacher would, summoned them and set a child in their midst; the kind of child that would earn a penny for doing chores no one else would care to do. Whom would Jesus place in our midst today, here, on this Sunday morning? Who will be the smallest, the poorest in our midst, whom we should welcome a hundred years after our independence? Who is it that has nothing to give us, to make our effort and our sacrifices worthwhile? Perhaps it is the ethnic minorities of our city. Or the jobless who have to emigrate. May be it is the elderly and the lonely, or those young people who find no meaning in life because they have lost their roots.
“In their midst” means at the same distance from everybody, so that no one can claim not to notice, no one can argue that it is “somebody else’s responsibility” because “I didn’t see him”, or “I am further away”. And without anyone drawing attention to oneself, wanting to be applauded or singled out for praise.
There, in the city of Vilnius, the river Vilnia brought its waters and lost its name to the Neris; here, the Neris itself loses its name bringing its waters to the Neman. This reminds us of what it means to be a Church on the move, unafraid to go out and get involved, even when it might seem that we pour ourselves out, lose ourselves, in going forth to the weak, the neglected, those dwelling at the margins of life. Yet also knowing that to go forth also means to halt at times, to set aside our worries and cares, and to notice, to listen to and to accompany those left on the roadside. At times, it will mean acting like the father of the prodigal son, who waited at the door for his return, to fling it open as soon as he arrived (cf. ibid, 46). At other times, like the disciples, we will need to learn that in welcoming a little child, we welcome Jesus himself.

That is why we are here today. We want to welcome Jesus, in his word, in the Eucharist, in his little ones. To welcome him so that he can heal our memory and accompany us in this present time that presents us with exciting challenges and signposts, so that we can follow him as his disciples. For there is nothing truly human that does not find an echo in the heart of Christ’s disciples. We feel as our own the joys and the hopes, the sorrows and the afflictions of the people of our time, particularly the poor and the suffering (cf. SECOND VATICAN ECUMENICAL COUNCIL, Gaudium et Spes, 1). For this reason, and because as a community we feel true and profound solidarity with all humanity – here in this city and throughout Lithuania - and its history (cf. ibid.), we wish to spend our lives in joyful service, and thus to make known to all that Jesus Christ is our one hope.
FULL Official Text Translation by Vatican.va + Image Share from Vatican.va
Posted by Jesus Caritas Est at 9:36 AM