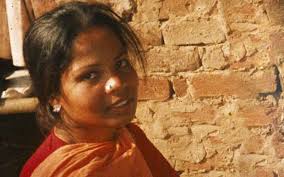 Islamabad (AsiaNews) - The Supreme Court overturned the death sentence that hung over Asia Bibi, a Christian woman who was convicted of blasphemy in 2010. Her case, an obvious manipulation of the so-called "black law" of Pakistan, sparked waves of solidarity worldwide, but also strong reactions within the country.
Even today, the headquarters of the Supreme Court were surrounded by groups of policemen for fear of violence against the judges and Asia Bibi herself. The three judges, Saqib Nisar, Asif Saeed Khosa and Mazhar Alam Khan Miankhel, after reading the 56-page verdict, told the woman she was free. Some radical groups led by imams have already decreed that they will oppose her release. In many cities of Punjiab there are demonstrations and roadblocks.
Many Christian schools have warned parents to go and get their children from school because they would wish to close the buildings for fear of violence. Asia Bibi was sentenced to death on 7 November 2010 by a Punjab court. She was arrested for blasphemy in June 2009, after an argument with some of her co-workers in which she defended her religion. The other women, who like Asia and her two daughters, are agricultural workers, urged her to renounce the Christian faith and embrace Islam. Asia Bibi replied by speaking of how Jesus died on the Cross for the sins of humanity, and asked the other women what Muhammad had done for them.
The women then beat her and her daughters and pushed by the local imam and a group of men, they accused her of blasphemy. The police took her into custody, saving her from a fierce mob. But after a year and more of a prison, she was sentenced to death. The then governor of Punjiab, Salman Taseer, a Muslim, was killed in 2011 for campaigning for her release, and the Catholic Shahbaz Bhatti, then minister for minorities, was killed a few months later for the same reason.
FULL TEXT Source: Asia News IT
Posted by Jesus Caritas Est at 11:17 AM