Synod - What does the Final Document Say? Summary “Walking together” - FULL Video of Final Proceedings 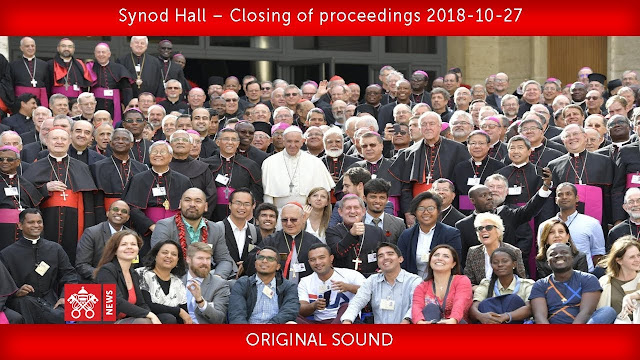 The Synod on Young People: What does the Final Document Say?
On Saturday afternoon, the Final Document of the XV Ordinary General Assembly of the Synod of Bishops consisting of 3 parts, 12 chapters, 167 paragraphs and 60 pages is approved in the Synod Hall. The text was received with applause, Cardinal da Rocha said. It is “the result of real teamwork” on the part of the Synod Fathers, together with other Synod participants and “the young people in a particular way”. The Document, therefore, gathers the 364 modifications, or amendments, that were presented. “Most of them,” the Cardinal said, “were precise and constructive”. Furthermore, the entire document passed with the necessary 2/3 majority voting in favor.


The inspiration for the Final Document for the Synod on Youth is the episode of the disciples of Emmaus, recounted by the evangelist Luke. It was read in the Synod Hall by the Rapporteur General, Cardinal Sérgio da Rocha, by the Special Secretaries, Fr Giacomo Costa and Fr Rossano Sala, together with Bishop Bruno Forte, a member of the Commission for the drafting of the text. It is complementary to the Instrumentum laboris of the Synod, and follows the three-part subdivision.
Part One: “He walked with them”

The first part of the document considers concrete aspects of young people’s lives. It emphasizes the important of schools and parishes. It acknowledges the need for laity to be trained to accompany young people especially since so many priests and bishops are already overburdened. The Document notes the irreplaceable role of Catholic educational institutions. The challenge the Document addresses is the need to rethink the role of the parish in terms of its vocational mission because it is often ineffective and not very dynamic, above all in the realm of catechesis.
The reality of young people regarding migration, abuse, the “throwaway culture” are also dwelt on in part one. Regarding abuse, the Synod Document calls for a “firm commitment for the adoption of rigorous preventive measures that will keep such abuse from being repeated, beginning with the selection and formation of those to whom leadership and educational roles are entrusted”. The world of art, music and sports is also discussed in terms of using them as “pastoral resources”.

Part Two: “Their eyes were opened”

The Synod Document calls young people one of the “theological places” in which the Lord makes himself present. Thanks to them, it says, the Church can renew herself, shaking off its “heaviness and slowness”. Mission, it says is a “sure compass” for youth since it is the gift of self that brings an authentic and lasting happiness. Closely connected with the concept of mission is vocation. Every baptismal vocation is a call to holiness.
Two other aspects covered in part two that aid in the development of the mission and vocation of young people are that of accompaniment and discernment.

Part Three: “They left without delay”

The icon presented by the Synod Fathers of the young Church is Mary Magdalene, the first witness of the Resurrection. All young people, the Synod Fathers affirm, including those with different visions of life, are in God’s heart.
“Walking together” is the synodal dynamic which the Fathers also bring to light in the part three. They invite the Conferences of Bishops’ around the world to continue the process of discernment with the aim of developing specific pastoral solutions. The definition of “synodality” provided is a style for mission that encourages us to move from "I" to "we" and to consider the multiplicity of faces, sensitivities, origins and cultures. One request repeatedly made in the hall, was that of establishing a "Directory of youth ministry in a vocational key" on the national level, that can help diocesan and parish leaders qualify their training and action "with" and "for" young people, helping to overcome a certain fragmentation of the pastoral care of the Church.
The Synod Document reminds families and Christian communities of the importance of accompanying young people to discover the gift of their sexuality. The bishops recognize the Church's difficulty in transmitting "the beauty of the Christian vision of sexuality" in the current cultural context. It is urgent, the document says, to seek "more appropriate ways which are translated concretely into the development of renewed formative paths".
In the end, the Document brings the various topics covered in the Synod into one vocational thrust, that is, the call to holiness. "Vocational differences are gathered in the unique and universal call to holiness”. Through the holiness of so many young people willing to renounce life in the midst of persecution in order to remain faithful to the Gospel, the Church can renew its spiritual ardor and its apostolic vigor. FULL TEXT Source: Vatican News va
Posted by Jesus Caritas Est at 9:18 AM