Cardinal Müller Defends Pope Francis against Viganò “No one has the right to indict the pope or ask him to resign!” in Interview 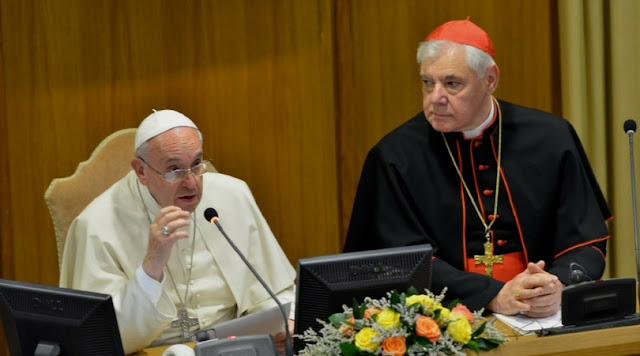 Andrea Tornielli, journalist for the Vatican Insider published an interview on Nov. 27, 2018. In the interview he speaks with German Cardinal Gerhard Müller, former prefect of the Congregation for the Doctrine of the Faith. The lengthy interview covered many issues but notably the Cardinal came out in strong support of Pope Francis. In fact, in response to allegations by former Nuncio Archbishop Carlo Maria Viganò, Cardinal Müller rebukes him saying:

“No one has the right to indict the pope or ask him to resign!”
Müller said, this referring to the Aug. 26, 2018 statement  by Archbishop Carlo Maria Viganò, nuncio to the U.S. from 2011-2016. In this statement Vigano accuses Francis of ignoring the sexual misconduct of ex-Cardinal Theodore McCarrick and asked him to resign.
Cardinal Müller also commented on politics: "We are all united in the revealed faith, and not by the prejudices of political ideologies. We are not a political entity.” However, these conversations “must take place in private, in the proper places, and without ever making a public controversy,” he said, since “attacks” “end up questioning the credibility of the Church and her mission.”
In strong defense of Pope Francis, Müller said,
"I am personally convinced that Pope Francis is doing everything possible to counter the phenomenon of child abuse and to foster a new spirituality for priests, who must act according to the heart of Christ and do the good of all people, especially children and young people".
Cardinal Muller also defended Pope Francis' decision to postpone the American Bishops' conference on abuse saying:
"I thought it was necessary for the presidency of the American Bishops' Conference to first consult with our experts at the Congregation for the Doctrine of the Faith. The Holy Father is a single person, he cannot deal with everything. That is why there are the departments of the Roman Curia, to collaborate and arrive at a well-developed proposal to bring to the Pope".
When asked about accusations that Pope Francis appoints bad bishops Cardinal Müller explained: "Even today it is possible that the Pope may appoint a person who is "false", who is not suitable for the role, for the episcopate. Jesus Christ himself, even though he knew everything thanks to his divine intellect, left freedom to the traitor Judas. Everyone is then responsible for their sin: we can, through the process of selection with the Congregations, through all our human judgments, do everything possible to elect a good candidate. But the Pope is not responsible for what these bishops then do, as the bishops are not responsible for everything their priests do. Everyone is personally responsible for the evil they commit".
Quotations from Interview by LaStampa - Vatican Insider by Andrea Tornielli
Posted by Jesus Caritas Est at 1:26 PM