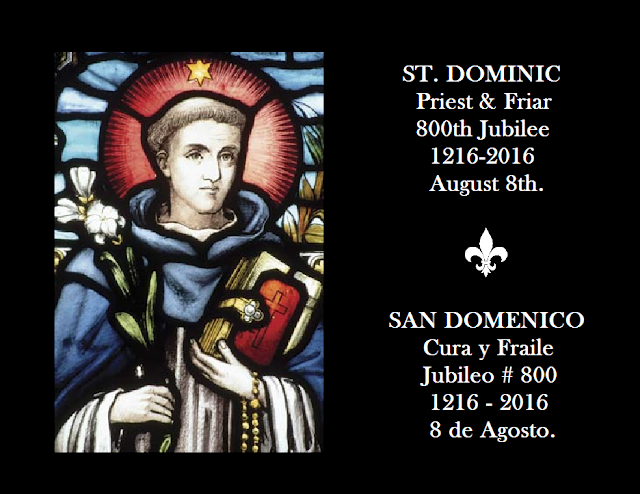 Founder of the Order of Preachers, commonly known as the Dominican Order; born at Calaroga, in Old Castile, c. 1170; died 6 August, 1221. His parents, Felix Guzman and Joanna of Aza, undoubtedly belonged to the nobility of Spain, though probably neither was connected with the reigning house of Castile, as some of the saint's biographers assert. Of Felix Guzman, personally, little is known, except that he was in every sense the worthy head of a family of saints. To nobility of blood Joanna of Aza added a nobility of soul which so enshrined her in the popular veneration that in 1828 she was solemnly beatified by

Leo XII. The example of such parents was not without its effect upon their children. Not only Saint Dominic but also his brothers, Antonio and Manes, were distinguished for their extraordinary sanctity. Antonio, the eldest, became a secular priest and, having distributed his patrimony to the poor, entered a hospital where he spent his life ministering to the sick. Manes, following in the footsteps of Dominic, became a Friar Preacher, and was beatified by Gregory XVI. CATHOLIC ENCYCLOPEDIA
Posted by Jesus Caritas Est at 10:36 PM No comments: 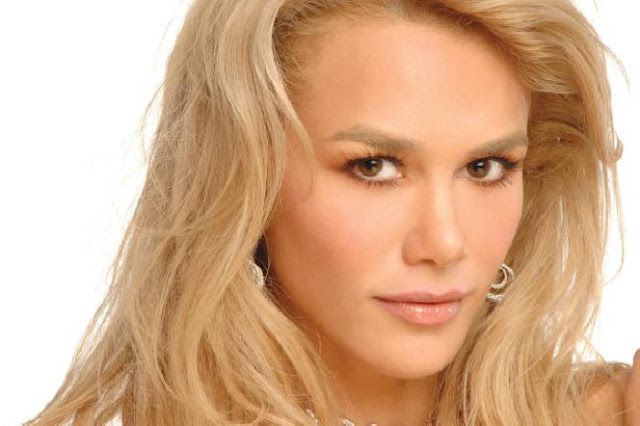 Amada Rosa Pérez was one of Colombia’s top models before she disappeared years ago. She made headlines by sharing her conversion story. The Colombian newspaper “El Tiempo,” interviewed her and she explained that she had been diagnosed with a disease that left her with only 60 percent of her hearing in her left ear. The news caused her to question her lifestyle. “I felt disappointed, unsatisfied, directionless, submerged in fleeting pleasures ...” she said. “I always sought answers and the world never gave them to me.” “Before I was always in a hurry, stressed out, and got upset easily," she continued.

"Now I live in peace, the world doesn’t appeal to me, I enjoy every moment the Lord gives me. I go to Mass, I pray the Holy Rosary daily, as well as the Divine Mercy Chaplet at 3 p.m. “I go to confession frequently,” she said. 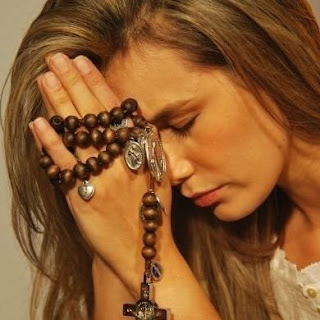 Amada works with a Marian religious community in Colombia. “Being a model means being a benchmark, someone whose beliefs are worthy of being imitated, and I grew tired of being a model of superficiality. I grew tired of a world of lies, appearances, falsity, hypocrisy and deception, a society full of anti-values that exalts violence, adultery, drugs, alcohol, fighting, and a world that exalts riches, pleasure, sexual immorality and fraud. “I want to be a model that promotes the true dignity of women and not their being used for commercial purposes,” Amada said.

Posted by Jesus Caritas Est at 1:43 PM No comments:

Faith of the Martyr, or the second Great Schism? An Academic Analysis by Dr. Gary Knight 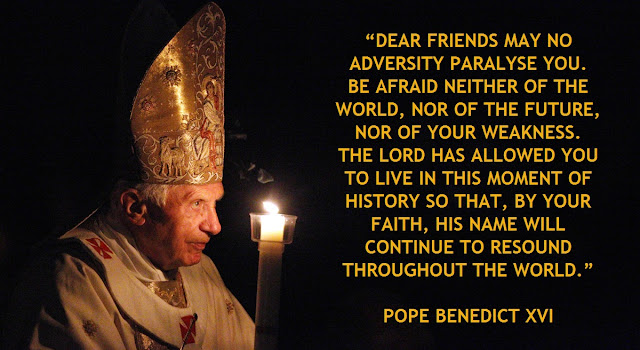 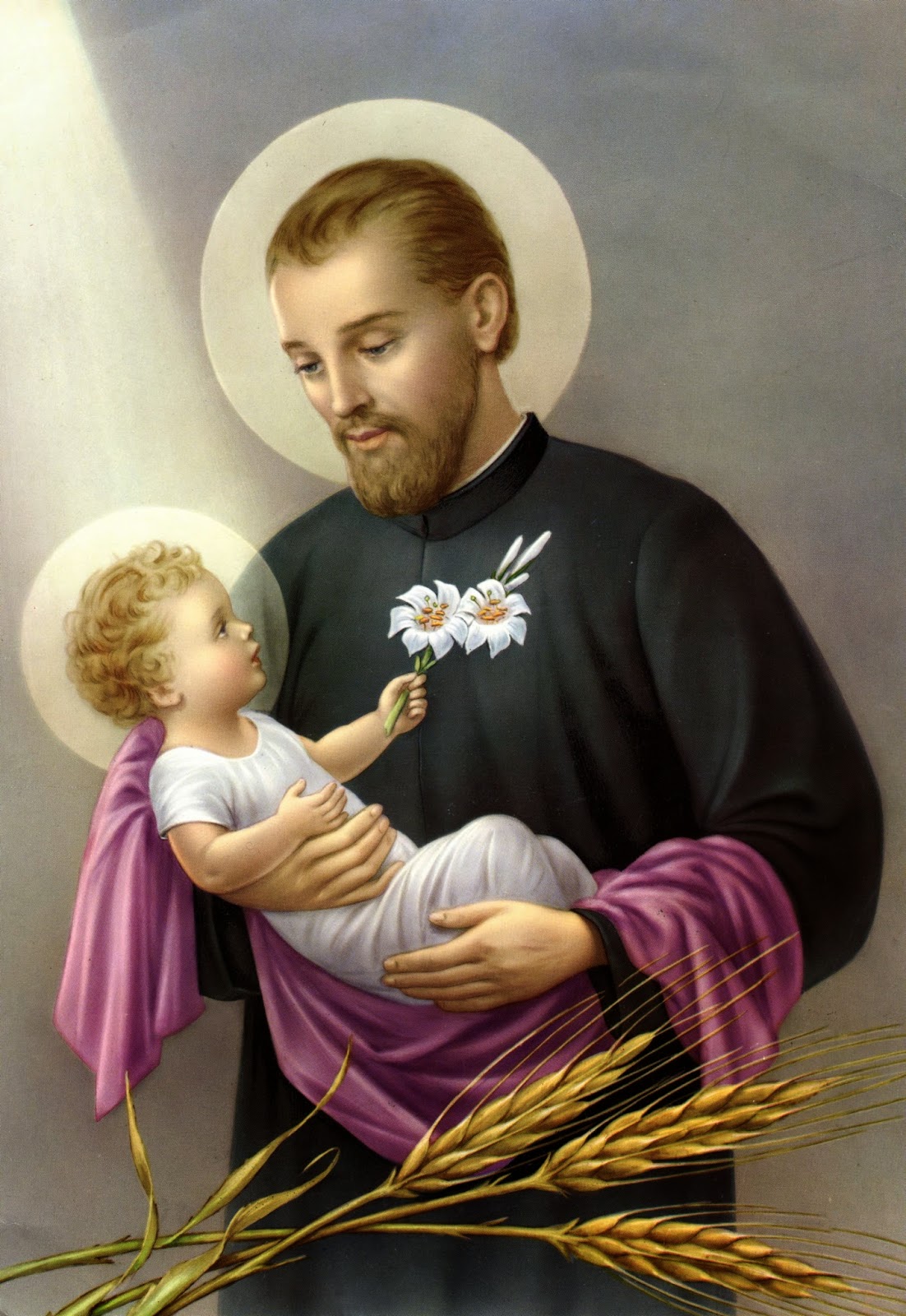 Tuesday of the Eighteenth Week in Ordinary Time
Lectionary: 408

The following message came to Jeremiah from the LORD:
For thus says the LORD, the God of Israel:
Write all the words I have spoken to you in a book.

For thus says the LORD:
Incurable is your wound,
grievous your bruise;
There is none to plead your cause,
no remedy for your running sore,
no healing for you.
All your lovers have forgotten you,
they do not seek you.
I struck you as an enemy would strike,
punished you cruelly;
Why cry out over your wound?
your pain is without relief.
Because of your great guilt,
your numerous sins,
I have done this to you.

Thus says the LORD:
See! I will restore the tents of Jacob,
his dwellings I will pity;
City shall be rebuilt upon hill,
and palace restored as it was.
From them will resound songs of praise,
the laughter of happy men.
I will make them not few, but many;
they will not be tiny, for I will glorify them.
His sons shall be as of old,
his assembly before me shall stand firm;
I will punish all his oppressors.
His leader shall be one of his own,
and his rulers shall come from his kin.
When I summon him, he shall approach me;
how else should one take the deadly risk
of approaching me? says the LORD.
You shall be my people,
and I will be your God.

Jesus made the disciples get into a boat
and precede him to the other side of the sea,
while he dismissed the crowds.
After doing so, he went up on the mountain by himself to pray.
When it was evening he was there alone.
Meanwhile the boat, already a few miles offshore,
was being tossed about by the waves, for the wind was against it.
During the fourth watch of the night,
he came toward them, walking on the sea.
When the disciples saw him walking on the sea they were terrified.
"It is a ghost," they said, and they cried out in fear.
At once Jesus spoke to them, "Take courage, it is I; do not be afraid."
Peter said to him in reply,
"Lord, if it is you, command me to come to you on the water."
He said, "Come."
Peter got out of the boat and began to walk on the water toward Jesus.
But when he saw how strong the wind was he became frightened;
and, beginning to sink, he cried out, "Lord, save me!"
Immediately Jesus stretched out his hand and caught him,
and said to him, "O you of little faith, why did you doubt?"
After they got into the boat, the wind died down.
Those who were in the boat did him homage, saying,
"Truly, you are the Son of God."

After making the crossing, they came to land at Gennesaret.
When the men of that place recognized him,
they sent word to all the surrounding country.
People brought to him all those who were sick
and begged him that they might touch only the tassel on his cloak,
and as many as touched it were healed.


Some Pharisees and scribes came to Jesus from Jerusalem and said,
"Why do your disciples break the tradition of the elders?
They do not wash their hands when they eat a meal."
He summoned the crowd and said to them, "Hear and understand.
It is not what enters one's mouth that defiles the man;
but what comes out of the mouth is what defiles one."
Then his disciples approached and said to him,
"Do you know that the Pharisees took offense
when they heard what you said?"
He said in reply, "Every plant that my heavenly Father has not planted
will be uprooted.
Let them alone; they are blind guides of the blind.
If a blind man leads a blind man,
both will fall into a pit."
Posted by Jesus Caritas Est at 10:03 AM No comments: 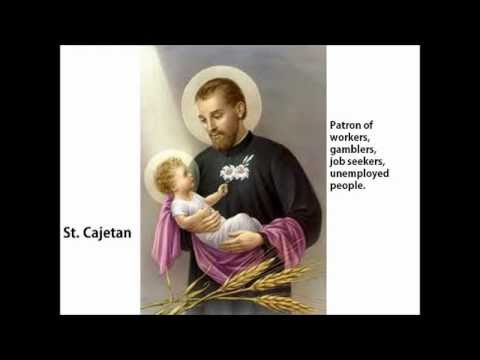 August 7
Born:
October 1, 1480, Vicenza, Veneto, Republic of Venice (now Italy)
Died:
August 7, 1547, Naples, Campania, Kingdom of Naples
Canonized:
April 12, 1671, Rome by Pope Clement X
Patron of:
workers; gamblers; job seekers; unemployed people Founder of the Theatines, born October, 1480 at Vicenza in Venetian territory; died at Naples in 1547. Under the care of a pious mother he passed a studious and exemplary youth, and took his degree as doctor utriusque juris at Padua in his twenty-fourth year. In 1506 he became at Rome a prothonotary Apostolic in the court of Julius II, and took an important share in reconciling the Republic of Venice with that pontiff. On the death of Julius in 1523 he withdrew from the court, and is credited with founding, shortly after, an association of pious priests and prelates called the Oratory of Divine Love, which spread to other Italian towns. Though remarkable for his intense love of God, he did not advance to the priesthood till 1516. Recalled to Vicenza in the following year by the death of his mother, he founded there a hospital for incurables, thus giving proof of the active charity that filled his whole life. But his zeal was more deeply moved by the spiritual diseases that, in those days of political disorder, infected the clergy of all ranks, and, like St. Augustine in earlier times, he strove to reform them by instituting a body of regular clergy, who should combine the spirit of monasticism with the exercises of the active ministry.


Returning to Rome in 1523 he laid the foundations of his new congregation, which was canonically erected by Clement VII in 1524. One of his four companions was Giovanni Pietro Caraffa, Bishop of Chieti (in Latin Theate), afterwards Paul IV, who was elected first superior, and from whose title arose the name Theatines. The order grew but slowly. During the sack of Rome in 1527 the Theatines, then twelve in number, escaped to Venice after enduring many outrages from the heretic invaders. There Cajetan met St. Hieronymus Æmiliani (see SOMASCHI), whom he assisted in the establishment of his Congregation of Clerks Regular. In 1533 Cajetan founded a house in Naples, where he was able to check the advances of Lutheranism. In 1540 he was again at Venice, whence he extended his work to Verona and Vicenza. He passed the last four years of his life, a sort of seraphic existence, at Naples where he died finally of grief at the discords of the city, suffering in his last moments a kind of mystical crucifixion. He was beatified by Urban VIII in 1629, and canonized by Clement X in 1671. His feast is kept on the 7th of August.

http://www.catholicnewsworld.com/2017/08/novena-to-saint-cajetan-for-work-patron.html
Posted by Jesus Caritas Est at 12:50 AM No comments: