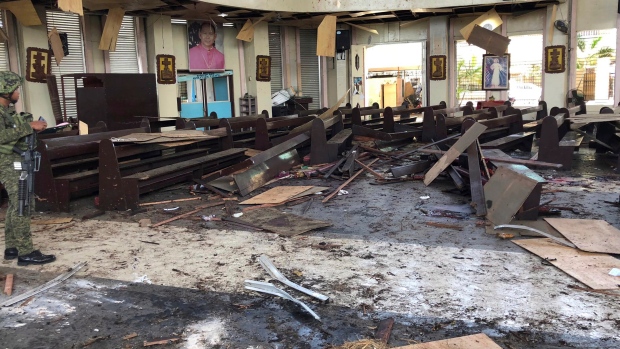 Two bombs go off near Jolo cathedral killing at least 27 people Jolo and injured 111 people according to latest reports. The blast occurred this Sunday morning at the Catholic cathedral in Jolo, an island near Mindanao.
The first blast happened at 8.45 am, as Sunday Mass was underway, in the Church of Our Lady of Mount Carmel, which had been targeted in the past. A second device was detonated in the nearby parking lot.
As the military sealed off the area, the injured were taken to hospitals with some airlifted to Zamboanga.
Jolo island has long been troubled by Abu Sayyaf, a terrorist organisation inspired by al Qaeda, which has carried out bombings, kidnappings and beheadings.
Today's attack comes a few hours after a referendum approved the creation o the Bangsamoro Autonomous Region in Muslim Mindanao (BARMM).
The vote ended with the victory for autonomy and should bring to an end almost 50 years of conflict between the Philippine military and rebel separatist Islamic groups. However, although many Muslims backed the new political entity, the province of Sulu rejected it. Jolo is its capital. (Edited from Asia News and CTV)
Vatican News reported that Pope Francis Prayed for the Victims of the Attack while at World Youth Day:

Expressing his "firmest reproach" for a terrorist attack perpetrated on the Cathedral of Jolo in the Philippines while the Eucharist was being celebrated, Pope Francis prayed the Lord to “convert the hearts of the violent and grant the inhabitants of that region a peaceful coexistence”.
The Pope, who was speaking in Panama on the last day of World Youth Day 2019, said he entrusts the 20 victims of the attack to Christ and to the Virgin, and he noted that it brings “new mourning to this Christian community.”