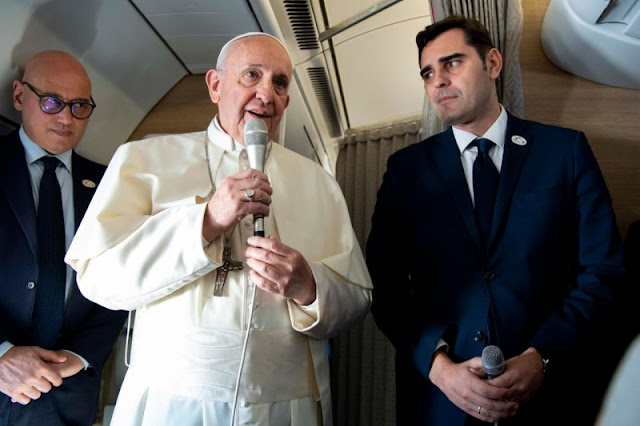 Pope Francis: I will go to Japan in November
Conversing with journalists on the flight to Panama, Pope Francis spoke about migrants and about future voyages
By Vatican News

Pope Francis said he would be going to Japan in November, and urged people to “get ready.”

The Holy Father’s remarks came aboard the flight to Panama, in response to a question from a Japanese journalist asking if the Pope was planning a trip to his country. Pope Francis said he also wanted to visit Iraq, but that the local Bishops say it is not safe at the moment.


Another journalist gave the pope a picture of the young migrant who died at sea, who had his report card sewn into his clothes. The Pope was visibly moved, saying he wanted to talk about it on the return journey.

In answer to a question from a reporter Italian television network Tg1 about the walls erected to stop migrants in Tijuana, on the border between Mexico and the United States, Pope Francis said that fear makes us crazy, and he suggested reading the editorial in L’Osservatore Romano titled “I muri della paura” (“The Walls of Fear”).

The interim Director of the Holy See Press Office, Alessandro Gisotti, responding to questions from journalists, said that the Apostolic Voyage of the Pope to Japan “is in the phase of being studied. As the Holy Father has already said on other occasions, he has a great desire to go to this country. With regard to a possible visit to Iraq, the conditions at the moment do not exist for a visit of the Holy Father, as already affirmed also by Cardinal Pietro Parolin on his return from his visit to the country last December.”
FULL TEXT Source: Vatican News Va
Posted by Jesus Caritas Est at 5:41 PM