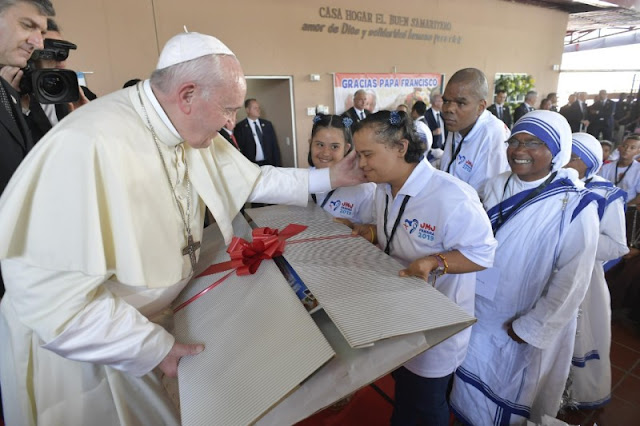 WYD Panama: Pope says Shelter shows 'Maternal face of the Church'
Pope Francis visits the Good Samaritan Shelter in a symbolic gesture of being close to all those who, because of illness or disability, were unable to attend WYD events.
By Seàn-Patrick Lovett

You might easily drive past the “Casa Hogar El Buen Samaritano” and not even notice. Tucked away in a side-street of a Panama City suburb, from the outside it looks just like any other house. There’s no sign or billboard to tell you this is no ordinary residence. Nothing to indicate that this is home to those who would otherwise have none.

No one comes here to die
All 18 of the guests in this house are living with HIV Aids, victims not only of the illness, but of the prejudice, ignorance and fear that accompanies it. Ranging in age from 16 to 60, they have been rejected and abandoned by their families. But, as the slogan for the structure indicates: “No one comes here to die”. They come instead to recover, and to  rediscover, a fuller dimension to their lives.

Officially, around 30,000 people suffer from HIV Aids in Panama. But given the stigma attached to the illness, that number is probably only indicative. As in many other parts of the world, the Catholic Church runs centres and foundations, like this one, to assist various disadvantaged categories of people with varying degrees of disability.
Creating a home, creating community
Four of these Church foundations, represented by 60 people, came together at the Good Samaritan Shelter on Sunday for what was a particularly touching and intimate encounter with the Pope. After listening to their stories and accepting their gifts, all hand-made by the participants themselves, Pope Francis noted how “the maternal face of the Church” is capable of “creating a home, creating community”. And creating a home, he continued, “is to create a family”. A home, said the Pope, “demands that everyone work together”, it means learning patience, and forgiving one another”.

And that is how “the miracle takes place”, said the Pope. “We feel that here we are reborn, because we feel God’s caress that enable us to dream of a more human world”.
FULL TEXT Share from Vatican News va