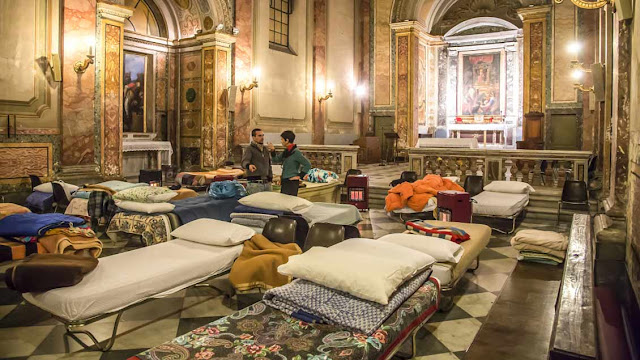 Because of the cold in Rome, the Vatican has stepped up its aid to the homeless in the Eternal City. Temperatures are currently falling below 0 degrees at night. The papal alms office not only distributed winter sleeping bags and provided more beds, but also thought of the dogs homeless, as reported by the portal "Vatican News".

In collaboration with the Order of Malta and a veterinary clinic in Ostia, homeless people can have their four-legged friends examined and treated for free on the third Sunday of each month.

Lunch for 250 people in need
For protection against freezing temperatures, the Alms Office created additional sleeping places in a homeless shelter run by nuns not far from St. Peter's Square. In addition, the church of San Calisto in Trastevere is again available at night as a place to sleep with 30 seats. Church help includes food and washing facilities for the needy.

Meanwhile, the Catholic community of Sant'Egidio called for donations. For Sunday, the organization announced in a communication also a lunch for 250 homeless people in Rome.

On Friday, a homeless man had been found dead on the banks of the Tiber in Rome. According to media reports, the cold could be responsible for the death of the 52-year-old man.

Same concept applied to the illegal aliens with the catholic mission providing aid and comfort comfort encouraging this mass migrations under the order of the Vatican. Yet, despite a wall, and putting people in dots imcold weather. Everyone asks are the children safe? Are there any pedophile Priest or Nuns supervisiimg children. Cameras, security, background checks. And continue to stay there until their plight is resolved so that others can receive those warm beds. And to think in all of Rome there are just the few homeless or displaced people wow.

Yet the Pope blames this on Satan entering the church. With this kind of behavior it appears that Satan has been there all along.
You understand your Priest and Clergy are just getting beat up on this. Yet it still Satan fault. Mmy point is if you don’t fix this it will destroy the Catholic Church. If Satan is indeed I’m the mist, it’s not at the Priest level, never its starts from the top. The Pope May think climate change will destroy humanity. This concept will not destroy humanity it will destroy the Catholic Church. I’m not being mean I pm trying desperately to give you a wake up call. Get out of that sanctuary palace and get out where you are needed more than ever. You are perceived as a weak pope. Catering to the left on homosexuality and climate change. Beloved subject of Satan. Surely abortion will be the next item. I, not sure changing the Lord’s Prayer will solve this. It may have worked in the past but not now. Your on the ropes millions are depending you or awaiting the white puff of smoke if it is necessary. Finally honestly people are afraid for their children as sacrament helpers, due to the sexual devastation of their children. Yet nothing done, close the doors and hang on. Repentance forgiveness correct the situation was I thought a start on a long road. People want these pedophile priests to be charged with capital crimes. And those are Catholic you don’t want to hear what non catholic have to say. I had heard the prophecy about all Popes and this one was a bad one. With no prophetic replacement or correction. Your going to have to face this. Someone must hear the shame. Right now it’s the whole church and it is destroyeimg you. I’ve written to the Pope to provide some assistance as a Pastor Christian Church. But as usual not a peep, even an acknowledgement that I took the time to reply nor not Eva prayer request. You can do better, the church depends on it. It may mean the destruction of the church and suffering for many, even more than one. I know you don’t acknowledge me or pray for my church, but nevertheless I pray about your church and your situation. I’ve come to believe that God is waiting for you, not you waiting for aGod. But I’m not Catholic, so aim sure I’m wrong. Praying for your church brother and sisters. That’s all I can do, the rest is up to you. Just like everyone else,even the Pope is not exclusive on their prayer partners. As a Pastor you sometimes cause me more anguish trying to explain this to someone I have no Answers, a vision from the Holy Spirit but it must be a different Holy Spirit because for me it’s works different than for you.

Read above I said enough

So many are under the impression that priest become pedophiles but it’s exactly the opposite. Pedophiles become priest. Pedophiles will infiltrate organizations where they have access to children. The Pope is right that Satan is entering the church he is through these evil people.

But is not it cold in these churches too? The homeless have to freeze there, too. You can hardly heat such large churches? Translate Google German - English

Here a better translation by DeepL.com

But isn't it also cold in these churches? The homeless have to freeze there too. You can hardly heat such large churches.

There's just no pleasing some people...

This is wonderful news!

Amen, u said it

Better than laying on thestreets. They have blankets and warm food

If people leave the Body of Christ based on the sins of the fathers, they never knew Christ totally. So sad. Once you meet Him, esp. In the Eucharist, you cannot leave!!!

St. JP2 warned the smoke of satan had entered the Vatican.
Any place of God has satan when unrepentent disobediance infiltrates the ranks. It is permission for evil to enter

That was Paul VI who made the comment about Smoke of Satan in the context of abuses of Vatican II. Also, one of the first acts of Francis was to open a homeless shelter ner the Vatican plus next door, baths for anyone on the street, with clothing, bedding, shave and haircuts, etc. There's enough bad news in the church, let's not find petty fault.

Satan resides IN and OUT of the Vatican. Either with
disobedience to God,
pedophilia, rape, incest,
religion discrimination,
sweeping and hateful general-izations and
superiority complex,
SATAN DWELLS IN such proud and HATEFUL hearts.

Hateful ANONYMOUS clearly seeks to besmirch not the priests, but the CATHOLIC RELIGION.

Now that the Vatican has acknowledged the sins of the past and present clergy and doing corrections, such a HATEFUL GENERALIZATION in an article about the Church's clerical work teems with HATE, ENVY and ANTAGONISM.

May the HOLY SPIRIT descend upon your hateful heart.

what a subtle way to desecrate the Church. Of all the places you can shelter people, does it have to be infront of the Altar... Satan's performance.

It's clear you have never seen a Church from inside.you see the church building from outside and think that it's an ugly old building but once you enter it you will see the real beauty of the church. Of course from the inside not everything is perfect but still it's beautiful. The world would be much poorer without the Catholic Church. Imagine all the Schools, Hospitals, Charitable organisations. You can go to a war torn country in Latin America or Africa or Asia. For sure I don't think you will find any UN freedom troops there. But certainly you will find a poor nun or a priest or some Catholic organisation in those crisis areas attending to the needs of the suffering people.
You know it's easy to critize the Catholic Church here. Actually they are doing what the state is suppose to be doing, namely to help and provide for its citizens. The state contributes not a single cent to the Church to help them providing those services to the poor. Come around the Vatican and see for yourself how money poor people hang around there everyday. Because they know that here they can get a free meal, free shower, free haircut, a place to sleep etc.
So please stop complaining and do something to make this world a better place.

Do not judge says Jesus