Cardinal Marx at Meeting against Abuse "...there needs to be transparency and traceability..." FULL TEXT + Video 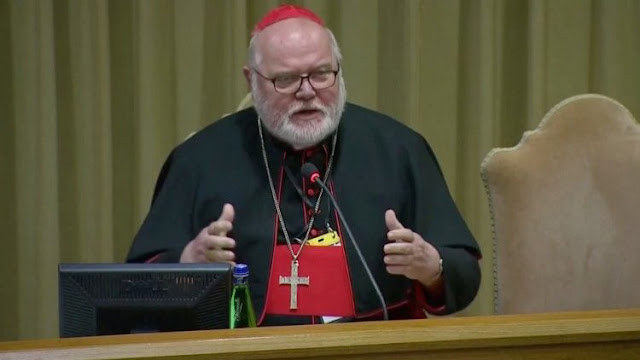 23 February 2019
PREPARED TEXT
Holy See provided - WORKING TRANSLATION
Cardinal Reinhard Marx, Archbishop of Munich and Freising, President of the
German Bishops’ Conference:
Speech at the International Conference of Presidents of Bishops’ Conferences
"On the Protection of Minors in the Church"
Vatican, 23 February 2019
Transparency as a Community of Believers
Holy Father,
Your Eminences, your Excellencies,
Dear sisters and brothers,
When I speak to you today about transparency, then I do this under two
conditions. Firstly, on condition of a specific understanding of the concept of
transparency. I understand this not as the greatest possible mass of diverse,
uncoordinated information disclosed. For me, transparency means that actions,
decisions, processes, procedures, etc. are understandable and traceable. I believe
that traceability and transparency are inextricably linked.
Secondly, I speak to you about transparency in relation to traceability as a
cardinal who is German. Perhaps some of you will now immediately think: typical,
actually one cannot expect anything else. Us Germans are known for a certain
tendency towards administration, which includes these already-mentioned aspects of
traceability and transparency. Files, documents, forms, guidelines, paragraphs, lists,
procedural rules and the like - these seem to be handed down to Germans from birth,
and anyone who somehow has to do with us also seems in some way to be
confronted with all these things I have just mentioned. Some people may consider
this as a certain quirkiness, and not pay further attention to it. Others - perhaps even
the majority - may be opposed to all of this. They ask themselves seriously: Is this
administration not contrary to the dynamics of life? Is it not clear to them, that
administration puts files in focus, instead of people and their needs? Is it not true that
administration only creates additional work, and distracts from the real tasks?
I would like to address these questions with you. And don't worry - this is not
a problem just for Germans, Swiss or Americans. It is a fundamental problem,
which we all have to face together as a Church, especially and specifically
regarding appropriate handling of the topic of abuse. It is important to clarify how
much administration the Church needs. And at first glance, it seems rather that less
is required.
This assumption can be based on numerous aspects. Faith cannot be
administered. The Spirit of God cannot possibly be captured in a file or folder.
God’s love is reflected in specific acts of caring for the people, rather than in
administrative documents. Prayer is much stronger than any number of
administrative procedures. The sacraments convey true mercy, while
administration remains part of the minutiae of this world. One could enumerate
further arguments to show: administration doesn’t actually fit so well in the
Church, and can more or less be neglected. But is that really true? Let us attempt to
clarify this, by going through the following thought processes together, and
becoming conscious of: what constitutes the Church; what role should
administration play; how does administration fulfil its purpose; what must be
attended to, so that the required prerequisites are in place, and what are the
resulting tasks?
Even here, however, I cannot conceal what I am firmly convinced of, and
what I think is essential: administration within the area of responsibility of the
Church is not only a technical, specialist or functional issue. Such administration
within the Church is closely related to theological fundamentals, is theologically spiritually motivated, and closely linked with the specific actions of the Church. A fully-functional Church administration is an important building block in the fight
against abuse, and in dealing with abuse. Why this is so, in my opinion, will be
shown in the following sections.
The Church’s understanding of itself
The Church has a mission in this world. As the Dogmatic Constitution on the
Church “Lumen Gentium” says right at the beginning: “the Church is in Christ like a
sacrament or as a sign and instrument both of a very closely knit union with God and
of the unity of the whole human race” (LG 1). This mission is fulfilled by specific
people in specific locations under very specific conditions, which also requires
appropriate, tangible worldly means. Therefore, it is for good reason that a little
further in the text of Lumen Gentium it states: “Christ, the one Mediator, established
and continually sustains here on earth His holy Church, the community of faith, hope
and charity, as an entity with visible delineation (…). But, the society structured with
hierarchical organs and the Mystical Body of Christ, are not to be considered as two
realities, nor are the visible assembly and the spiritual community, nor the earthly
Church and the Church enriched with heavenly things; rather they form one complex
reality which coalesces from a divine and a human element.” (LG 8). And it then goes
on to say: “For this reason, by no weak analogy, it [the church; RM] is compared to
the mystery of the incarnate Word. As the assumed nature inseparably united to
Him, serves the divine Word as a living organ of salvation, so, in a similar way, does
the visible social structure of the Church serve the Spirit of Christ, who vivifies it, in
the building up of the body (…).”

Posted by Jesus Caritas Est at 9:59 AM