Pope Francis "Let us consider that the Lord is pained in His heart, and let us draw near to the Lord and speak to him..." Homily 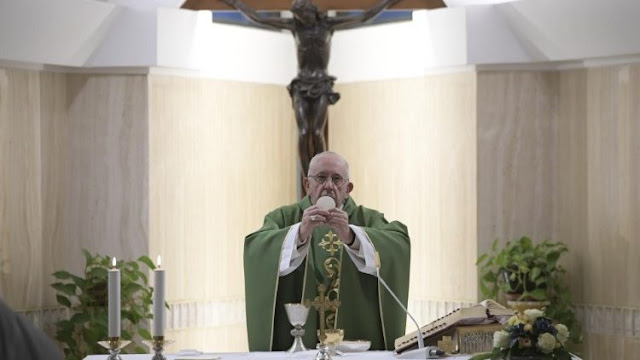 Pope at Mass: ‘Cost of war weighs on the weak’
In his homily at Mass in the Casa Santa Marta on Tuesday, Pope Francis reflects on the cost of war, calling it a ‘modern-day flood’ whose price is paid by the poorest among us.
By Vatican News

Pope Francis compared the Biblical flood of Noah’s time to the many wars being waged in today’s world.

Reflecting on the day’s reading from Genesis (6:5-8;7:1-5,10) in his homily, the Holy Father said there is a golden thread running through the story of the flood and modern-day conflicts.

He said we must ask God for the grace to cry and lament when faced with the world’s calamities and the victims of war, many of whom are starving children, orphans, and the poor who pay the highest price.

God has feelings
Faced with these realities, Pope Francis invited us to have a heart like God’s – capable of anger, pain, and closeness to others – one that is both human and divine.

The Pope highlighted God’s suffering when He sees the evil of men and women, and noted that God “regretted” having created people so much that He decided to erase us from the face of the earth.

This is a God with feelings, said Pope Francis, “who is not abstract” and who “suffers”, calling this “the mystery of the Lord”.

“[These are] the feelings of God, God the Father who loves us – and love is a relationship. He is able to get angry and to feel rage. It is Jesus who comes and gives us the path, with the suffering of the heart, everything… But our God has feelings. Our God loves us with the heart; He doesn’t love us with ideas but loves us with the heart. And when He caresses us, He caresses us with His heart, and when He disciplines us, like a good father, He disciplines us with His heart, suffering more than we do.”

Listen to our report
Our times are no better than those of the flood
Pope Francis said our relationship with God is one “of heart to heart, of son to Father who opens Himself, and if He is capable of feeling pain in His heart, then we, too, will be able to feel pain before Him.” The Pope said this is not sentimentalism, but the truth.

Our times, he said, are not so different from those of the flood. There are problems and calamities, poor, hungry, persecuted, and tortured people, “people who die in war because others throw bombs as if they were candy”.

“I don’t think our times are better than those of the flood; I don’t think so. Calamities are more or less the same; the victims are more or less the same. Let’s think about the example of the weakest: children. The many hungry children and children without education cannot grow in peace. [Many are] without parents because they have been massacred in war… child soldiers… Let us just think about those children.”

Cry as Jesus did
Pope Francis said we need to ask for the grace to have “a heart like the heart of God – one made in the likeness of God” that feels pain when witnessing others suffer.

“There is the great calamity of the flood; there is the great calamity of today’s wars, where the price of the party is paid by the weak, the poor, children, and those who have no resources to carry on. Let us consider that the Lord is pained in His heart, and let us draw near to the Lord and speak to Him, saying: ‘Lord, observe these things; I understand you.’ Let us console the Lord: ‘I understand you, and I am with you. I accompany you in prayer and intercede for all of these calamities which are the fruit of the devil who wants to destroy the work of God.’”
FULL TEXT Shared from Source Vatican News va