Russian Orthodox of Europe split with Orthodox Church of Constantinople 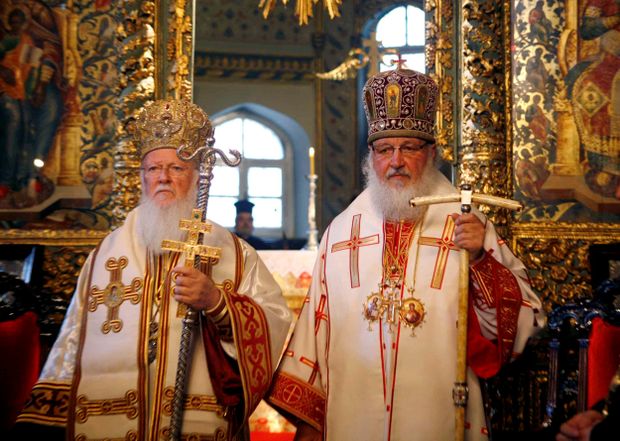 European Russians break ties with Constantinople
by Vladimir Rozanskij
This is an existing structure in 10 European countries (France, Spain, Great Britain, Germany, Italy, Holland, Belgium, Denmark, Sweden and Norway). Bartholomew wanted them to submit to the Greek bishops in European countries. The Patriarchate of Romania, the Russian Church abroad, the Patriarchate of Moscow are open to welcoming them.
Moscow (AsiaNews) - Since February 23rd, the Russian Orthodox exarchate, so far linked to the patriarchate of Constantinople, has decided to break ties with Bartholomew, following his choice to approve the autocephalous Church in Ukraine.
Anticipating possible objections, Bartholomew himself had suppressed the archdiocese of the European Russians as early as the end of November, more than a month before the delivery of the Autochthonous Tomos to the Church of Kiev.
The decision presupposed the self-liquidation of the Russian parishes of Constantinople, with the submission to the Greek bishops in the European countries. In the general assembly of last February 23, Russian parish priests refused to submit to this decision, after a series of meetings and local protests that already anticipated the breakup.
The representatives of the ex-exarchate have challenged Constantinople’s right to unilaterally decide their fate, recalling the democratic traditions of the European Orthodox communities and the history of Russian emigration in these countries. The Exarchate intends to continue to exist outside the jurisdiction of Bartholomew.
This is an existing structure in 10 European countries (France, Spain, Great Britain, Germany, Italy, Holland, Belgium, Denmark, Sweden and Norway), including 65 parishes, 11 major historic churches, two monasteries and seven hermitages. For the survival of the exarchate, 191 of the 206 participants in the assembly voted, with only 15 in favor of Constantinople.
They now must decide which jurisdiction to join. The possibilities are basically three: the patriarchate of Romania, the Russian Church abroad (in communion with Moscow, but with an autonomous structure), and the same patriarchate of Moscow.
All three Orthodox administrations declared themselves ready to welcome the European Russian communities: the Romanians for the large percentage of Romanians and Moldovans present in them; the Russians abroad for the historical bond of Russian emigration; Moscow for the call of the original motherland.
During the assembly of 23 February a letter was read from the Patriarch of Moscow Kirill (Gundjaev), who declared himself ready to welcome all the communities respecting their historical characteristics of autonomy and European integration, as expressed by the statutes of these Churches.
However, the proposal leaves some perplexities. In the last two decades, Moscow has exercised a very authoritarian policy, imposing on its parishes in Europe (which are more than 200) to adapt to the standards of the patriarchate of Moscow, eliminating the use of local languages ​​and traditions. Many participants in the assembly insisted on postponing the matter to another meeting in 2019.
In France the representative of Constantinople, Metropolitan Emmanuel (Adamakis), proposed forming an independent community within his diocese of Gallia, preserving the Russian traditions of the last 100 years. The Greek bishop in Italy, Metropolitan Gennadios (Zervos), has instead imposed the merger with the Greeks, provoking the reaction of the Russians in the historical parishes of Florence and Sanremo, who have passed to the Russian Church abroad to avoid the loss of their own church.
The bishop administrator of the Russian parishes in Europe, the metropolitan of Vienna and Budapest Antonij (Sevrjuk), sent a letter to the bishop of the former Russian archdiocese of Paris Ioann (Renneteau). Antonij is assisted by the new metropolitan of Korsun and Western Europe Ioann (Roščin), based in Paris.
They have communicated the will of the patriarchate of Moscow to welcome all the European Orthodox who in some way refer to the Russian tradition, divided from the homeland because of "sad circumstances of the past, and of the persecution of the Church in Russia", while today the Church of Moscow is ready to "re-establish its maternal assistance to the communities coming from the Russian tradition in Western Europe", respecting its traditions of the last century, and with the right to participate in the Synod of the Russian Orthodox Church.
FULL TEXT Release shared from AsiaNewsIT - (Image share from Google Images)
Posted by Jesus Caritas Est at 10:00 AM