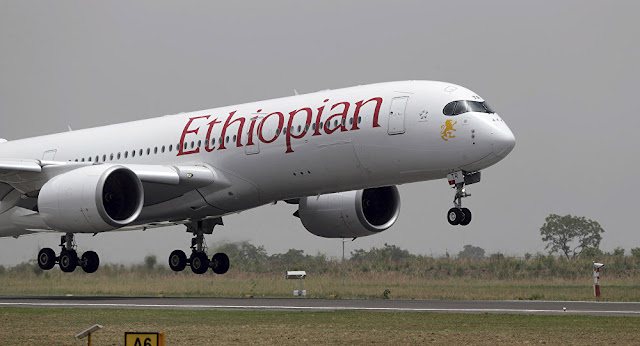 A jetliner carrying 157 people crashed shortly after takeoff from the Ethiopian capital Sunday, killing everyone aboard, authorities said. At least 35 nationalities were among the dead.

It was not clear what caused the Ethiopian Airlines plane to go down in clear weather.Both crashes involved the Boeing 737 Max 8, and both happened minutes after the jets became airborne.

The Ethiopian plane was new, having been delivered to the airline in November.

A general view shows the scene of the Ethiopian Airlines Flight ET 302 plane crash, near the town of Bishoftu, southeast of Addis Ababa, Ethiopia March 10, 2019.

The airline said 149 passengers and eight crew members were thought to be on the plane.

Ethiopian Airlines issued a list showing 35 nationalities among the dead, including 32 Kenyans and 18 Canadians. The list reflected a broad range of backgrounds, with passengers from China, the United States, Saudi Arabia, Nepal, Israel, India and Somalia.

The plane crashed six minutes after departing, plowing into the ground at Hejere near Bishoftu, or Debre Zeit at 8:44 a.m.
The pilot was a senior aviator, joining the airline in 2010, the CEO said.
Edited from PBS.org
UPDATE Pope Francis send Prayers and Condolences - Vatican Release:

Below please find the full text of the telegram sent by the Vatican Cardinal Secretary of State, Pietro Parolin on behalf of Pope Francis:
Having learned with sadness of the Ethiopian Airlines plane crash, His Holiness Pope Francis offers prayers for the deceased from various countries and commends their souls to the mercy of Almighty God. Pope Francis sends heartfelt condolences to their families, and upon all who mourn this tragic loss he invokes the divine blessings of consolation and strength.
Cardinal Pietro Parolin
Secretary of State
Posted by Jesus Caritas Est at 4:11 PM