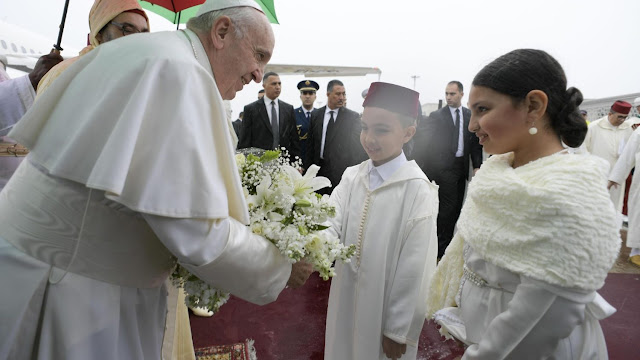 Pope Francis has arrived in Morocco for his Apostolic Journey in the Kingdom of Morocco on his first-ever visit to the Maghreb region of Northern Africa. Pope Francis landed at the Rabat-Salé airport and was met at the foot of the plane by His Majesty King Mohammed VI, for a very brief ceremony of greeting.  Pope Francis to building bridges between Christians and Muslims. The small Catholic community in Morocco is commemorating, the 800th anniversary of the encounter between St. Francis and Sultan al-Malik al-K'mall. (Image Source: Vatican News va - ANSA)

********************************
DONATE Now to Catholic News World, a Mission, which brings the Gospel to over 200 Countries World Wide! Every little bit helps - as a Donor you and your Family will be added to our Mass Prayers - You can add your prayer intention on the Donation site "Donor Wall":
https://donorbox.org/support-catholic-news-world-we-need-
Posted by Jesus Caritas Est at 10:54 AM