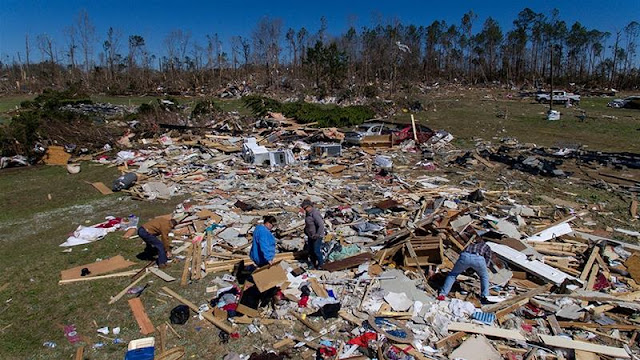 Seven members of one family were among the 23 victims identified after an outbreak of tornadoes devastated the US state of Alabama.

Every victim, including four children, was found close to their homes, rescue crews say.

The victims range in age from six to 89.
Up to eight people remain missing, officials say, and there are fears the death toll could rise.


The tornadoes struck eastern Alabama on Sunday, levelling homes and carving a path of at least a half mile (0.8km) wide in some parts of the state.

About 50 structures have been reduced to rubble.

Almost 50 people were injured and numerous homes and businesses were reduced to rubble as multiple tornadoes touched down in south-east Alabama and Georgia.

During Tuesday's briefing, an official with the National Weather Service said the deadliest tornado had travelled for about 70 miles, and another nearby travelled for 29 miles.
Edited from BBC News
Vatican News released the condolences of Pope Francis:

Below please find the full text of the telegram sent by the Vatican Cardinal Secretary of State,
Pietro Parolin on behalf of Pope Francis:
The Most Reverend Thomas J. Rodi Archbishop of Mobile Deeply saddened to learn of the tragic loss of life and the injuries caused by the tornado which struck Alabama in recent days, His Holiness Pope Francis expresses heartfelt solidarity with all affected by this natural disaster. He prays that Almighty God may grant eternal rest to the dead, especially the children, and healing and consolation to the injured and those who grieve. Upon all who are suffering the effects of this calamity, the Holy Father invokes the Lord’s blessings of peace and strength.
Cardinal Pietro Parolin Secretary of State
Posted by Jesus Caritas Est at 9:47 AM