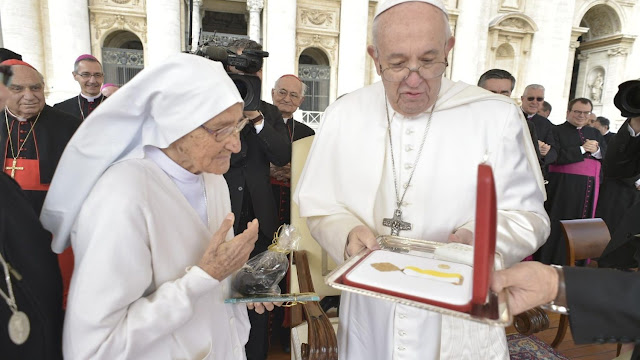 Pope Francis awarded Italian missionary nun at General Audience. The Holy Father on Wednesday honoured Sr Maria Concetta Esu for her tireless work as a midwife in Africa over the past 60 years.
Sister Maria Concetta Esu is an Italian nun who for almost 60 years has devoted her life to missionary work in Africa. In her profession as a midwife, Sister Concetta has delivered thousands of babies and at 85 her commitment to children, mothers and families continues.

In recognition of her tireless efforts, Pope Francis at the end of his General Audience on Wednesday, honoured this Sister from the Congregation of the Daughters of St. Joseph of Genoni, telling her this accolade was “a sign of our affection and our ‘thanks’ for all the work you have done in the midst of our African brothers and sisters, in the service of life…”

The Pope told the pilgrims present that he had met Sr Maria Concetta in Bangui in the Central African Republic during his visit to open the Jubilee of Mercy in 2015, adding, “that day, too, she came from Congo in a canoe, … to do her shopping in Bangui.”

While honouring this religious sister, the Pontiff also took the opportunity to express his gratitude to all the missionaries, priests, religious and laity, who, he said, may not make the news, but “sow the seeds of the Kingdom of God in every part of the world.”

This Lent Donate to Catholic News World which brings the Gospel to over 200 Countries World Wide! Every little bit helps - as a Donor you and your Family will be added to our Mass Prayers - You can add your prayer intention on the Donation site "Donor Wall":
https://donorbox.org/support-catholic-news-world-we-need-
Posted by Jesus Caritas Est at 9:12 AM