Beatification of 4 Modern Martyrs from Argentina who were assassinated in the 1976 “dirty war”. 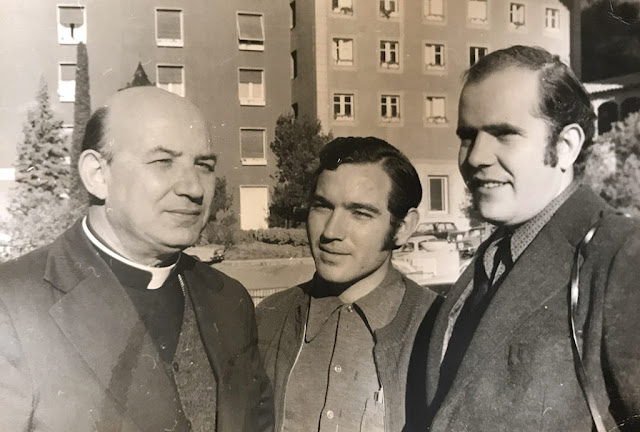 Beatification of four modern martyrs to the faith in Argentina
The Prefect of the Congregation for the Causes of Saints, Cardinal Angelo Becciu, presides over the beatification in Argentina of Bishop Enrique Angelelli, Fr Carlos Murias, Fr Gabriel Longueville, and lay catechist Wenceslao Pedernera. All were assassinated in 1976 during Argentina’s “dirty war”.
Vatican News report: By Seàn-Patrick Lovett

The first person to call them “martyrs” was the then Archbishop of Buenos Aires, Jorge Bergoglio, when he celebrated a memorial Mass for them in the Cathedral of La Rioja. Bishop Angelelli “shed his blood” for preaching the Gospel, said the future Pope Francis in his homily, and “the blood of the martyrs is the seed of the Church”.

The meaning of martyrdom
On Saturday morning, Cardinal Angelo Becciu, returned to the meaning of martyrdom when he celebrated their Beatification Mass in La Rioja City Park. “Their witness frustrates the claim to live selfishly or to build a model of society that is closed and without reference to moral and spiritual values”, he said. “The Martyrs exhort us…to be heralds of peace, agents of justice, and witnesses of solidarity”.

Who are these modern martyrs?
Bishop Enrique Angelelli was the son of Italian immigrants. His pastoral work, first in Córdoba and later in La Rioja, always focused on the poor and the oppressed.

This was Argentina in the mid-1970’s, the start of what came to be known as the “dirty war”, when right-wing death squads kidnapped, tortured and assassinated anyone suspected of being a political or ideological threat. 30,000 people disappeared, mostly students, trade unionists, journalists, artists, and sometimes priests.

Conventual Franciscan, Fr Carlos de Dios Murias, and French missionary, Fr Gabriel Longueville, worked together in the same rural parish, championing issues of social justice. In July 1976, they were tortured to death and their bodies left mutilated. A week later, a lay catechist, Wenceslao Pedernera, was shot to death in front of his wife and three daughters.

“It’s my turn next”
Bishop Angelelli understood he was on a death squad list and would often say: “It’s my turn next”. On 4 August 1976, he was driving back home after celebrating Mass for the two murdered priests, when his truck was overturned and he was murdered at the side of the road. In 2014 an Argentine Court confirmed that his assassination was a “premeditated act” and the result of “State-sponsored terrorism”.

In his homily at the Beatification Mass, Cardinal Becciu added that all four men were killed “because of their active efforts to promote Christian justice”. At the time of their murder, he continued, civil authorities did all they could to obstruct “commitment to social justice and to promoting the dignity of the human person”.

Models of Christian life
The Cardinal called these four Blesseds “models of Christian life”. The example of Bishop Angelelli, he said, “teaches today's pastors to exercise their ministry with burning charity, remaining strong in faith”. The example of the two priests, he added, “exhorts today's priests not to compromise, to remain faithful at all costs”. The father of the family, he concluded, “teaches the laity to distinguish themselves by the transparency of their faith, letting themselves be guided by it”.
FULL TEXT Source: VaticanNewsva - Image source: Google Images - Catholic Sun
Bishop Enrique Angelelli Carletti of La Rioja, Argentina, is shown in a 1974 photo taken in Germany with two collaborators from his rural movement ministry, which promoted co-ops for small farmers.
Posted by Jesus Caritas Est at 3:37 PM