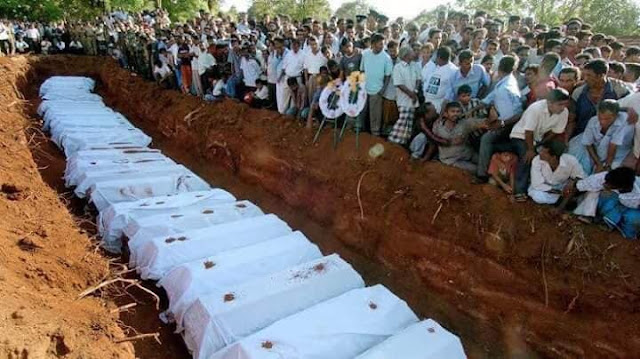 The bombings in Sri Lanka on Easter Sunday 2019 have claimed 321 lives. A report has indicated that the terrorist group ISIS has claimed responsibility in retaliation for the attack against a mosque in New Zealand.
The country of Sri Lanka held a national day of mourning with the first set of burials taking place.
A moment of silence and memorial services took place on Tuesday, April 23, 2019.
The Islamic State (ISIS) used it's Amaq news agency to report its claim.
The Sri Lankan prime minister, Ranil Wickremesinghe, said all those arrested (40 people) so far are Sri Lankan nationals.
The death toll climbed to 321 people with 500 injured– including 38 foreigners.
An relative of the Bangladeshi prime minister is among the 45 children that died in the attack.

“The total now is 45 children who died,” UNICEF spokesman Christophe Boulierac said in Geneva, Boulierac also said that others “are wounded and are now fighting for their lives.”

All over the world flags were flown at half mast in honour of Sri Lanka victims.
The lights of the Eiffel Tower, in France, were dimmed as a mark of respect to victims.