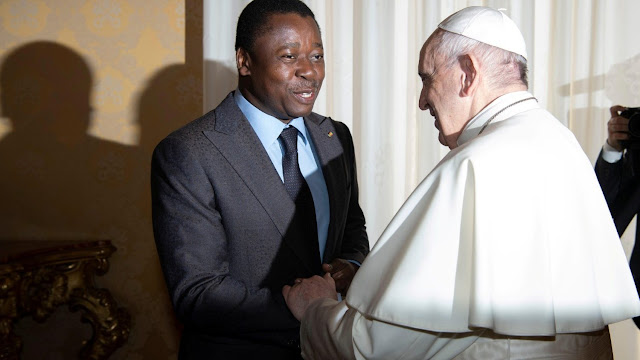 Vatican News report: Pope receives president of Togo
Among the issues that the Holy See and Togolese delegations discussed during the April 29 meetings was the Church’s contribution to Togo and the challenges facing West and Sub-Saharan Africa.
Pope Francis on Monday received in audience in the Vatican, President Faure Essozimna Gnassingbé of Togo, the Holy See Press Office said in a brief statement.  Gnassingbé later met Vatican Secretary of State, Cardinal Pietro Parolin and Vatican Secretary for Relations with States, Archbishop Paul Richard Gallagher.

The Vatican said that “during the cordial discussions, the good existing relations between the Holy See and Togo were evoked, as well as the prospects of their further consolidation.”  In this context, the two sides focused on the current situation of the West African nation, “underlining the contribution of the Catholic Church to the integral development of the Togolese population, especially through her commitment in the fields of education and healthcare.”

They also discussed some challenges specific to the countries of West and Sub-Saharan Africa, and showed the “need for joint efforts at regional and international level in favour of security, stability and peace.” FULL TEXT and Image Source Share: Vatican News va