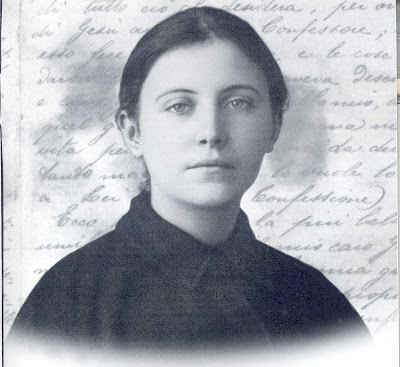 There is little to be said about her life. Born at Camigliano in Tuscany, she suffered from 'tuberculosis of the spine with aggravated curvature', and, though she considered herself cured by a vision of the young Saint Gabriel Possenti, she could not obtain a certificate of health enabling her to enter a convent, as she wished. She had many 'abnormal' experiences from June 1899 onwards, including the 'stigmata' in hands and feet, carefully examined by her confessor and biographer, the Passionist Fr Germano. These began to appear about 8 p.m. on a Thursday and lasted till 3 p.m. on the Friday. No pain preceded their apparition, but only a deep recollection. There was seen first a discoloration on the back and palm of each hand; then a 'rent in the flesh' under the skin which then split, and a deep laceration was observed, at least usually: the holes above and below corresponded and the perforations seemed complete, but it was hard to judge of this because they kept firing up with blood, partly flowing, partly congealing. Fr Germano measured the diameters and shapes of the wounds carefully, and noted that 'a few times' a sort of fleshy swelling, like a nail-head, about an inch across, covered the wounds in the hands (though not those in the feet): 'The deep wounds were the more usual state of Gemma's stigmata—I say, the more usual state'. He also says that directly the Friday ecstasy was over, 'the flow of blood from all < five> wounds ceased immediately; the raw flesh healed; the lacerated tissues healed too': at least by Sunday not a vestige remained of the deep 'cavities'; the new skin was smooth, though 'whitish marks' remained on it. Much more could be said about this saint, but this account suffices as occasion for explaining the principles governing the Church's approach to these and allied phenomena.
First, the Congregation of Rites, declaring that Gemma practiced the Christian virtues to a heroic degree, explicitly refrained from passing judgment on the preternatural character of the recorded phenomena; a matter (it adds) 'upon which no decision is ever made' (see <Acta Apostolicae Sedis> vol. xxiv [1932], p. 57, and Thurston: <Physical Phenomena of Mysticism>, ed. J. H. Crehan, chapter 11, especially pp. 52-54).

We must first register the alleged <facts> presented to us for observation, and then consider the evidence. Only then may we tentatively embark on <interpretation>. So we notice that before the time of St. Francis of Assisi there can be quoted only two or three instances of stigmatization of doubtful character: but since St. Francis, instances become almost innumerable up to the present day. We start by excluding those where self-inflicted wounds can even be suspected; for there have been instances of downright imposture, of misguided asceticism-conscious or possibly unconscious. This cannot apply to Gemma Galgani, since the gradual appearance and disappearance of her wounds was scrupulously <watched>. Again, all instances of complete stigmatization (save probably two) are found in women, and usually (though by no means always) in women who lead an enclosed and constantly meditative life; this suggests that the mind can influence the body-as it obviously can: a <thought> can make one blush, or turn pale. Further, an ecstatica's stigmata (or visions) not seldom correspond with some picture or effigy that she habitually sees: the marks of the scourging on Gemma are said to reproduce those on a crucifix she contemplated; Catherine Emmerich and others 'see' our Lord on a Y-shaped cross like one they were accustomed to; some will see Him crucified with three, others with four, nails; the wound of the lance may be on the right, or again on the left. We may therefore grant that <even if> a supernatural grace be granted to the soul, the mind, helped by the imagination, may proceed to interpret it to itself by means of such ideas or images as it possesses or prefers. But how far can the 'mind' influence the body? 'Dermatography'—marks on the skin, usually disappearing soon—can undoubtedly be induced by suggestion, whether it be self-suggestion or administered by another; but can suggestion cause lesions of the tissues, persisting and not becoming gangrenous? The word 'hysteria' should now be left aside—the ugly word 'pithiatism' may be replacing it—it merely means 'suggestibility'. Now there is no fault in being 'suggestible'; one person may lie abnormally open to the stimulus of anger, fear, sex or pity. If then we seek the nature of the stimulus lying behind the bodily manifestations observed in one who, on other grounds, is judged to be of exceptional holiness, we can prudently suppose that it is love for God, for Christ incarnate, or crucified, which so moves the entire 'subject'—body-mind—as to produce the exterior phenomena. The miracle would then lie in the intensity of the love for God granted to a human soul; the physical consequences of so super-human a love might be quite incalculable, by no means necessarily the stigmata, though possibly including them: indeed, disconcerting symptoms might well co-exist with those that might be expected, and should by no means be at once ascribed to diabolic influences. The description of all abnormal symptoms of the sort under discussion should be purely clinical, not rhetorical or pietistic.

St. Gemma Galgani was beatified in 1933, and canonized in 1940. Text Source: EWTN
***
Prayer to St Gemma asking for her intercessionOh holy Gemma, I am near you, help me to pray. You know what I and those near me need; look after my urgent needs and my spiritual and material wants. You take care of them! I confide in you and entrust all to your loving care. Offer up to Jesus that tender and constant care that you bore Him here on earth.Oh holy Gemma, you who physically suffered all the pains of the Passion of Jesus, I beseech of you the grace to meditate on and live the Passion of Jesus, and the sufferings of Holy Mary. Pray that I will be able to walk in the path of humility, simplicity, love and sacrifice, fulfilling at all times and in all ways, the holy will of God. Let me live united with Jesus, the Blessed Virgin Mary, and you, for all eternity. Amen.(taken from a St Gemma Holy Card) - Source: stgemmagalgani.com